My Sister Was Murdered: Drinking Couldn’t Help Me Deal With the Pain 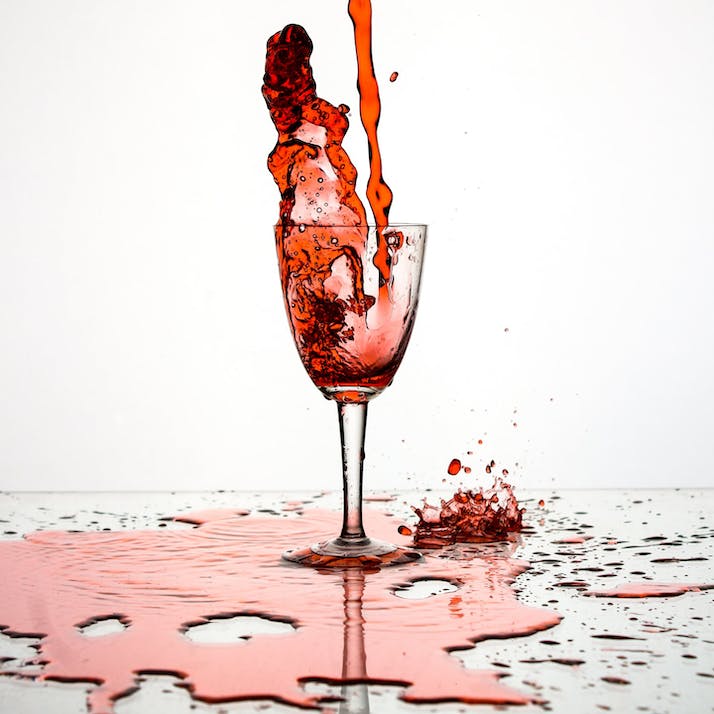 My Sister Was Murdered: Drinking Couldn’t Help Me Deal With the Pain

I tried to drown my grief in cheap wine. I reemerged as a new person.

“Is 4 o’clock too early to open a bottle of wine?” I stare at my husband as if waiting for approval. I know my body needs something. Not food. Not water. Something to make me disappear, someplace to go. I don't wait for an answer; I uncork the wine and pour myself a massive glass.

Since my sister, K., was murdered, I numb myself, become small, become as close as I can to nothing at all. I want to sink inside the soil, mix with her bones, her arms, her strong hands that couldn’t defend herself, wrap my body around her body. I want to place my palm upon her beating heart.

Except it isn’t beating because he fucking killed her.

“”
She looks natural, except for the blood that has dried and hardened on the right side of her head.

It’s Wednesday, May 26. My sister’s husband of 25 years waits until she gets home from work to shoot her, to make her voiceless. Before that, he says his goodbyes to his mother and brother, changes the insurance policies, eats lunch at a local cafe and washes a load of clothes, which are still spinning in the dryer when we find her sprawled out on the tiled floor. She doesn’t see him coming behind her. He pulls the trigger three times to the back of her head. He’s a coward like that, sneaking and stalking in the shadows like a roach.

I’m mowing the lawn, listening to an audiobook of Ken Follett’s The Pillars of the Earth on my headset when he kills her. I’m at the part where the boys in the castle throw rocks at helpless cats just because they can. Cornish hens with red potatoes are baking in the oven. The weather in Duluth is unseasonably warm and blue and happy. I’m wearing a Lady Gaga T-shirt and ripped black shorts, the same tattered clothes I end up wearing to the hospital that night.

A friend calls at 5:15 p.m. “Have you heard the news? The cops are surrounding K.’s house. I think he did something to her.”

The next thing I know, I’m inside a pale-colored room that smells of disinfectant, my sister’s Tabu perfume and something hideously sour. K. is attached to a ventilator. Swirling tubes snake from her nose. Her hair had just been highlighted in caramels and blondes, and streaks of black mascara are dripping under her bottom lashes. She looks natural, except for the blood that has dried and hardened on the right side of her head.

Once I catch my breath, I kick the bedpost over and over until the top of my tennis shoe cracks. I circle the room, pleading to a silent God, “Let her wake up. Wake up. Please wake up.” Her eyes remain shut like a porcelain doll.

Two guards stand on each side of the doorway like bar bouncers, a procedure they must follow after someone is murdered. They place M., her killer, in another hospital, which is also procedure. All of these safety precautions set in motion after my sister is already dead.

Five days after the murder, I stand at the church podium and say, “My sister is gone, and I don’t know where to go from here.” The silence hurts my entire body. It is loud, and ironically what killed her in the first place. It’s the same silence the elders exhibited when she was excommunicated from the place she worshiped for not attending marriage counseling. The same silence that destroys so many women who are not believed, heard or seen in a patriarchal society.

After reading several of K.'s journals, I’m startled by her pleas for help, “He pushed me. He’s a pig. He has no morals. I wish he’d go to Iraq and die. I didn’t deserve this. Help me.” Reading the words, oh my God, the things she never told me. I see more silence.

“”
Nothing is normal about your sister being murdered by the man you eat Sunday dinners with after church service for decades.

I Tried to Drink Away My Pain

After the memorial service, I don’t stay for cakes, cookies or tater tot hotdish. I need a bottle of red wine or two to dull myself, reduce myself. No, this isn’t my new normal. I hate when people say that. It’s my new abnormal. Nothing is normal about your sister being murdered by the man you eat Sunday dinners with after church service for decades.

I stop at the liquor store in West Duluth on the way home and place six bottles of Cupcake red wine on the counter. The young man ringing me up jokes, “I see we’re having a party, huh?” I can’t make eye contact with him because I know if I do, I’ll choke him with the strap of my Coach bag and howl like an animal caught in a snare.

I open a bottle when I arrive home. It helps me escape until the next day and the day after that. When I awaken with a throbbing headache, I’m swallowed up again by my sister’s murder, the shooting, the holes in her head, the organs being removed to be arranged inside another body and I worry about whether I have enough wine to last me through the day, the night, the rest of my life.

The drinking started as soon as K. was pronounced dead. I picked up wine on the way home from the hospital and proceeded to drink the entire bottle that night. Besides killing myself, which I have actually considered, I can’t figure out another way to relieve the ache of not having my sister on Earth. So I drink from beautiful flutes I purchase from T.J.Maxx for their elegant and ladylike shape. A real alcoholic drinks from a jelly glass or directly from the bottle, right? I drink to forget. I drink until the universe disappears.

I’m drowning in sorrow, but I’m still rational enough to know alcohol won’t cure the irrational part of me that wants to die too. The part that wants to place rocks inside my pockets and walk directly into Lake Superior.

Grief Has Become My Greatest Teacher

I’ve been writing this story for 10 years from different angles, while gulping cabernets, merlots, pinot noirs and Chiantis. The story keeps changing. In the beginning, I sat in the dark with a bottle of wine at my side, clicking unpolished nails against plastic keys. In the beginning, a therapist, who I called Dr. Stinkin’ Thinkin’, asked, “If I could give you a pill to make you forget, would you take it?

Today is another day, another year. Now I want to feel everything, resist nothing. My sister’s story matters, and I want to remember the details. A glass of wine or two is okay, but I’m more interested in staying sober than deadening myself into nothingness. I tried to become dead while I was still living, but this was just another kind of cage that kept me from moving forward.

This yearning gets me up in the morning, gives my pain direction, motivates me to support other women trapped inside their own snares. Although I’ve never been a cutter, I imagine this is what it feels like. The pain makes me remember I’m alive, makes me know my blood is still flowing red and warm and with purpose. And to be honest, I need the pain. I want the pain because forgetting my sister is more unbearable than remembering.

Grief doesn’t end. It bites with its sharp, insidious teeth at unexpected moments, although it's no longer my enemy. Instead, it’s become the greatest master class I never signed up for. I’ve come to realize that God lives, but the devil is real, too. He may be sitting at your kitchen table this very moment. Mostly, though, I’ve come to recognize that, unless I embrace this profound loss and walk directly through the flames, I might still be getting plastered every day at 4 o’clock.

Instead, I’ve decided to walk out of the darkness and into the light.