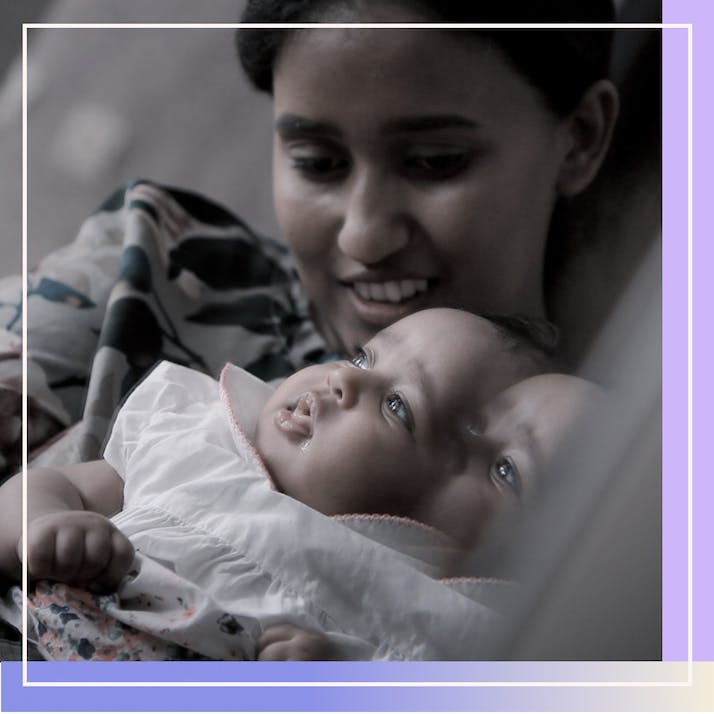 My Pakistani Family Expects Me to Have Kids, but I’m Not Sure

A week ago, I was speaking to my grandmother and happened to mention that I was on my period. She immediately looked sad. It took me a minute to realize that it was because getting my period meant I had not yet gotten pregnant. I got married a few months ago and, since then, my sister constantly keeps talking about how cute my babies will be and how desperately she wants a new baby in the family. It’s not like anyone’s pressuring me in particular, but there is a very open expectation that sooner or later, I will embrace the joys of motherhood.

I mean, after all, is it not the natural next step in my life? In every brown girl’s life? From the time Pakistani girls are teenagers, they are prepped to be married, and their lives are supposed to revolve around their husbands, in-laws and children. And while some of these more conservative mindsets are slowly easing up as women are pressured less to marry earlier and pursue independent careers, one thing has remained: The idea that a woman can only truly have achieved her purpose when she has become a mother.

“”
It feels scary that such a big decision, one that comes with a lot of responsibility, is being imposed on me simply because of my gender.

I Don’t Want to Sacrifice My Independence for My Family

I remember talking to a friend of mine about how for almost all women in the generations above us, the idea of using contraception before having their first child was unheard of. It wasn’t because they weren’t familiar with the idea of contraception—it was very common to use it after their first child—but rather the idea that they should have a baby as soon as possible. Both of us have often heard the phrase, “At least have one first, then you can plan,” because that would allow women to enter the realm of motherhood and tick off that much-needed box.

Women’s role as caregivers isn’t just limited to Pakistan or Islam. In fact, globally, women amount to a majority of unpaid or underpaid care workers. However, associating that labor with the emotions of having a child or keeping the family together makes it that much harder to talk about how motherhood and its very life-changing realities can impact women. I think that’s one of the major reasons that I feel so scared of having children—the fact that it's not really posed as a choice at all.

It feels scary that such a big decision, one that comes with a lot of responsibility, is being imposed on me simply because of my gender. What makes it even worse is that for most of the women I see around me, it hardly ever seems like a willing choice. Most of them seem to be drowning under the weight of motherhood. Where my fear really stems from is the idea of losing myself in favor of making a choice I’m not even sure I want. As selfish as this sounds, I don’t know if I want to give up my body, my sleep, my career and my independence simply to be constantly burdened by the mom-guilt of not doing right by my child. That’s not to say every woman finds it a burden—far from it, in fact. But child care can be hard even for those who desperately want to be parents, and isn’t that all the more reason why it should be an unburdened choice?

When I was getting married, people kept asking me if I planned on continuing my journalism career. When I said yes, they would nod politely and more often than not add, “Yes, it’s good to have a hobby and keep busy while you’re free. Once you have kids, you won’t have time for all this anymore.” One of my fears is that they might be right and that I will have to sacrifice a lot to become a mother.

I just don’t know if I’m ready to do that yet or if I ever will be.

“”
Being around them is only a reminder that I enjoy being an aunt far more than the idea of being a mother right now.

Do I Even Want to Be a Mother?

The loneliest part of all this is that the first time I’ve managed allow myself to feel these thoughts without feeling guilty fully has been in the process of writing this article. Whenever I’ve mentioned my fears and apprehensions to the people around me, I’ve been told to shut up because I’m being ungrateful, because I’m young and will probably change my mind and, most of all, because I risk jinxing my future and never having children. The last one is usually said with a look of pure horror.

My family members have been going gaga over the idea of a new baby in the family, despite me telling them multiple times I’m not having one any time soon. In fact, even when they used to gush over other people’s babies, I would always be the awkward one in the room, nodding along but not really understanding what the hype was. Sure, I think babies look cute, but looking at someone else's baby never made me feel an urge to hold them or care for them or really feel like I wanted one too. I love my cousins’ children and feel very close to them, but being around them is only a reminder that I enjoy being an aunt far more than the idea of being a mother right now.

As a young girl, I always thought the pressures of marriage and fears of not being able to pursue my ambitions led to these feelings. Now that I’m married and expected to make this very important decision in my life, those feelings seem stronger than ever. Having been on a journey to love and appreciate myself more after years of self-doubt, now more than ever, I am sure that losing myself again—for any reason—is not the way I want to build my life. I want to focus on my own identity as an individual before I make any decisions that will make it harder for me to hold on to that independence. I think, for now, the first step would be to stop shutting out my own thoughts from myself and actually delve into what motherhood means to me—and whether it’s right for me at all.