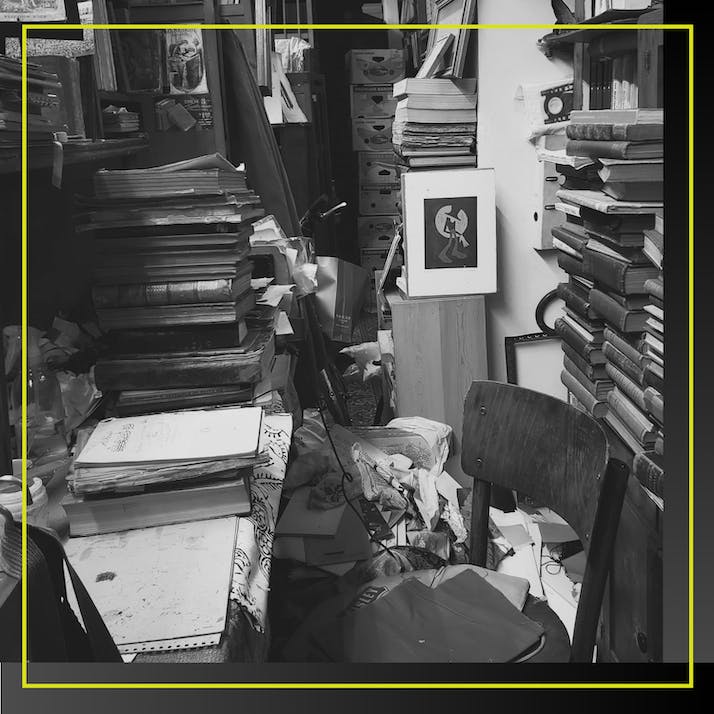 My Mother Is a Hoarder: What It's Like Growing Up in a Mess

My mother’s mental illness and endless accumulation have shaped my life.

Growing up, I never had a dining table. There was never any space in the tiny New York City railroad apartment my mom and I shared. Every available space was full of clothes, all brand new. Clothes from the Gap, stuffed into Costco storage bins stacked on top of each other. Bits of stuff from the '90s, still unworn. You could literally go shopping in my mom’s apartment.

I always knew this wasn’t normal or healthy. I’d go over to my friends' places after school and think: Oh, this is how people live. I’d see on TV what a home is supposed to look like. I didn’t feel good about it. Clearly, she didn’t either, because we kept it a secret, something that people weren’t really supposed to know. A shame thing.

“”
I always knew this wasn’t normal.

I Understand Why My Mother Hoards

My mother is an immigrant from the Dominican Republic. It’s a common thing for immigrants to hoard, because of the loss of identity, because of being in a new country where you don’t know the language, because of having more access to money and things.

She would resell things, kind of like people do on Depop today, but she was a hairdresser, so she’d do it in person. She would buy jewelry and little trinkets like that, and as the woman would be sitting in the chair getting her hair done, she’d show them the products, and make a little more money on the side.

What the actual profit margin was, I can’t tell you. That part never really made sense to me, how much money she was ever making back. But it gave her an excuse to keep accumulating, a way to say, “This is why I buy so many things, this is why I have so many things in my home.”

My mom’s hoarding wasn’t as much of an issue until my dad left. On top of being compulsive, there’s a loss aspect to it. For people who experience death or things like that, hoarding can be a coping mechanism. Once it became just my mother and me in the apartment, it got out of control.

Living With a Hoarder Was Constant Stress

I grew up in Bushwick, Brooklyn, in the same building I was born in. We were on the third floor of a three-unit, three-family building. Just your typical railroad apartment, with a bedroom in the middle that you have to walk through if you wanted to get anywhere else in the apartment. The middle room was the super-super hoarding room, with everything stacked up on each other: boxes on top of boxes, those big storage bins, random assortments of shit.

The room that faced the street was our bedroom, where we shared a bed. I didn’t have a bed of my own until I was an adult. In the kitchen, there were things stacked on top of things. There was some random seating in the middle room, maybe a recliner or something. And that would be where she spent most of her time, among her boxes and storage bins and random shit.

She and I actually watched Hoarders on TLC together, and it’s funny because she is always like, “I’m not like that. I’m not dirty, I’m not filthy. There’s no mold. That’s different than what I am doing. I am a businessperson. I am doing something to make money. If only I had the resources that I needed, if I had more space, this would actually make more sense to you. But you just don’t get it.” That kind of thing. But it’s like, you’re not gonna get to the point where you can sell all this stuff so it is just literally sitting there, being unused. There are people who could use those clothes.

For me, I experienced it as this very isolating, burdensome thing, a big secret. Your friends aren't allowed to come over. People can't just say, “Hey, I'm in the neighborhood, can I come in for some coffee?” It’s not that kind of a household. It was very shameful and stressful, because humans are not supposed to live in very cluttered environments—it’s literally not healthy. It contributed a lot to my mental health issues early on in my life.

My Mom's Mental Illness Made Mine Worse

Coexisting with my mom’s mental illness was beyond stressful—like catalyst-for-my-first-hospitalization type stressful. I would have these bursts of energy where I would be like, “I’m gonna clean, I am about to take this on by myself,” but I’d end up fed up and overwhelmed.

Once, when I was 18 or 19, I took it upon myself to clean out the room we both slept in, which I considered to be my room, because it was the only space I got to have. But it was still filled with her things. So I decided to claim the room as my own, and expel all of her things to the other third of the apartment when she wasn’t there. And of course, when she saw what I had done she had a panic attack, freaking out, on the verge of tears, when I’m literally just like, “I need to have a closet. I can’t fit my things in my own closet.” She didn’t like it, but I was able to take control of my room, and I painted the walls and put some stuff up. She didn’t want me to have any sort of physical autonomy with my space. That was not allowed, and that was clear. So I had to force it.

I remember being in the psych ward and telling her, “You have to understand that part of the reason I am here is because of your behavior, and if you don’t plan to do anything about it, you are contributing to me being here.” She would obviously say whatever she needed to say to acquiesce, but I knew even then that nothing was going to be able to happen, and that the only solution would be for me to be able to leave. So I did what I had to do to make that happen.

I moved out on my own three years ago. I had started to feel so doomed, like I was trapped in this home and environment. I really had to push myself out of that mentality, and fight her mental illness and mine at the same time. I got a job, started making money and started making friends.

The night before I moved out, while I was packing up my things, we had a huge fight. She literally left the apartment, which had never happened before during one of our fights. I think it was because she couldn't handle the guilt. I told her, “You realize I don't necessarily have the finances to do this, but I have to. Because if I stay here, I don’t know if I can handle that mentally. And you do realize that is your fault.” She was speechless. I was crying, and she just walked away, which is very unlike us. But I think it was clear to her at that point, what the situation was. It was really heavy.

“”
I refuse to go there anymore.

Am I Going To Turn Into a Hoarder Too?

I am definitely averse to hoarding things, thank god. I have little tendencies, but mostly my OCD manifests with repetitive behaviors, like biting my nails and cuticles. I’m very quick to get rid of things because I feel like it’s a slippery slope if you were raised in that kind of environment. So I try my best to be on top of it, which is also stressful.

I did inherit some of my mother’s cleanliness, though. Because, besides the hoarding OCD, she’s also very clean in some ways. It's kind of contradictory, because if you hate dust so much, and you say dust bothers you, it’s kind of strange that you would have so many surfaces and objects that would collect it. And no matter how much she cleans, there is always an unlimited amount of dust because there are so many things.

My mother has gotten to the point now where she knows it’s a problem. There have been attempts to fix things, but she is just one person, she can’t make the next step of asking for the physical help she needs to clean her place out. She has back issues and chronic pain issues. It’s ridiculous to think, “I’m just gonna sort this little bit today and this little bit tomorrow.” That’s just her trying to say things to smooth it over. She knows very well it’s not going to happen. She can’t even put a dent into that stuff.

I refuse to go there anymore. That’s my boundary. I’ve been there once, to pick something up while she wasn’t there. I don’t know if it had gotten worse or if I had just gotten a break, but I came back and it looked worse to me. But I’m sure it’s gotten even worse. With hoarding, no one else can stand being in that environment so they end up alone. Which is what the illness wants. The illness wants to keep you by yourself in this nightmare.