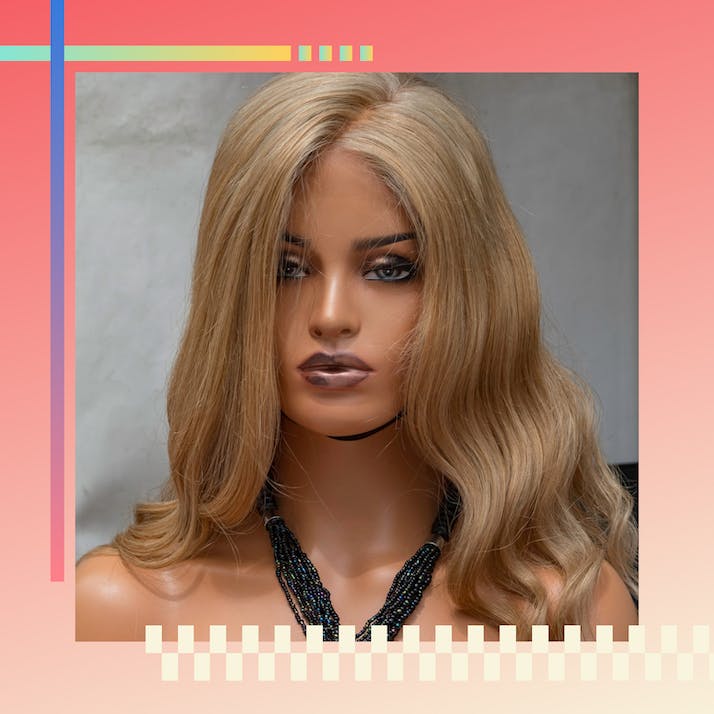 My Lineage: Wearing Fake Blonde Hair as a Status Symbol

A young woman, who followed in her mother and grandmother's footsteps by dyeing her hair blonde, explores her status as a sex symbol.

In my experience and research, and in the historical precedent of aesthetics as a tool of both domination and liberation, blondeness is one example of how my supposedly banal, everyday visual identity felt like co-signing a colonial mindset.

As a beauty industry worker and critic, I’ve been noticing that there are these things we do to acquire personal power, but we may not want to acknowledge how those choices are enforcing old, negative systems. To unconsciously categorize, rate, judge and classify ourselves and others based on physicality is something that happens every day. I feel it. I read about it. It’s classist, racist and patriarchal. And when I trace it back in time, I find that it’s why the salon industry exists in the way it does today.

I’ve recently been considering the difference between beauty and aesthetics. I think beauty is a subjective projection onto someone. “Oh wow, you’re beautiful’’ is a classification, an observer's appreciation of characteristics that has everything to do with context and culture. I have been told I’m beautiful. I have been told I’m ugly. On the other hand, aesthetics are what we choose to express with our own bodies and adornment. Aesthetics are how we create our personal vibration. Both aesthetics and beauty are social phenomena, and tools of communication, dependent on the perception of ourselves and others. It’s another piece of the human tendency to organize, control and classify one another and everything else we encounter on this planet.

In questioning the concepts of beauty and aesthetics, I’ve turned an analytical eye toward the idea of blondeness.

“”
I am a blonde, I am glamour-fem, imbued with power, ambition, soft and sharp, innocent.

Blondeness is much different than simply being a blonde person. It’s Madonna, Lady Gaga, Marilyn Monroe, even Ivanka Trump. It's larger than life, frequently a signal of class, status, the pursuit of “perfection,” designed to inspire aspiration. I like to think that one hundred percent of the time, blondeness is achieved by applying a series of chemicals to the hair to remove and oxidize the melanin molecules in the hair follicle. To intentionally acquire it is to endorse and acknowledge a perception, a “standard” of feminine beauty.

I’ve had many experiences stemming from an unconscious bias concerning blondeness. In politics, in Hollywood, in media, in queer culture and in salon culture—every time—it’s a statement or a reference: I am a blonde, I am glamour-fem, imbued with power, ambition, soft and sharp, innocent. I can afford blondeness, and that has more than a touch of domination in the cultural-historical, racialized, patriarchal, exclusionary kind of way. We have inherited blondeness as a code for hyper-whiteness and privilege; it holds space in colorism and hierarchy.

I Inherited My Fake Blondeness

I’m a caucasian, beige-skinned, white woman. I have a big body and skeleton. For about half of my life, I had a fat body. I always have felt beautiful and have cultivated and varied intentional aesthetics over different periods. I was born with light brown hair and it got a bit darker as I got older. I’ve even had two eras of blondeness in my own life. Looking back, I can see how those eras of blondeness happened around times of extreme pain and loss, when I needed a crutch to help me become something else.

In the first era, I was 20. I remember this kind of high-femme superiority, which satisfied a sense of being apart in a way that felt powerful. I got a lot of attention. I actually became something else by having different experiences in the world. I noticed this glamour-fantasy-image part of my identity being nourished. In that era, I was deeply related to my maternal grandmother, my main role model in all things feminine and a woman deeply committed to blondeness as a thing: elegant, long nails, jewelry, shoes, a smoking cigarette, a style-centric vibe.

I recently interviewed my auntie to discuss blondeness in our family. She has very clear memories of our familial fake-blonde inheritance. She spoke of my grandmother, who married at 16 and rapidly had four children and became a widow at 41. After her husband died, she arrived home from the salon “with her hair in a french twist and the softest blonde.” My grandmother had discovered that she got a boost from her blondeness, and she decided she wasn’t going to let that go. She went steadily blonder until achieving platinum. She kept the platinum color until she passed at 92. Over her 50 years of blondeness, she wore blonde hair, blonde wigs and drawn-on blonde brows. She became the thing, the image, the identity.

The second era of my personal blondeness lasted almost ten years. It took about a year to change my dark, color-treated hair into absolute platinum power blonde. It wasn’t only the physical process of removing color that took time, it was also the mental-emotional process of progressively wanting to be more blonde. I was committed. I even bleached my brows. At points, I went over the edge of blondeness into a kind of subverted-fantasy-alternative version of my blonde self, and admittedly, I loved it.

In times when I wore a more classic blonde tone, it was easy to inhabit the image of being blonde. It made me feel soft. I was in drag, wearing a prosthetic that allowed me to avoid doing the work of standing precisely in my voice, relevance, beliefs and contribution to place and history. Who was I really, beyond a consumer of culture, eating nice treats from cafes and restaurants and feeling like I was supposed to feel good about myself for it? Who was I, as a person, beyond being an artist, where I lived and how much I was earning? The crisis is easily avoided until it can no longer be avoided: What impact am I making? What do my choices mean to the social ecology and the environment, and not only in relation to the gentrified neighborhood or scene of the city/place/space?

“”
I was becoming committed to disempowering myself.

Deciding to Give Up My Blondeness

Five years ago, I moved to Mexico. I noticed that blondeness was everywhere—on billboards, advertisements, television, with people selling makeup, fashion, mattresses, cars. It also appeared in churches, deifying the blue-eyed, blonde-haired Jesus. Colonization of the American continent expanded the reach of the Euro-Western classification philosophies of the time, and their contemplation of an ideal human image.

In this country, I’ve met a lot of non-Mexicans who are utilizing blondeness as a power play. I’ve had conversations with some of these women, who consciously choose to engage in a sense of superiority based on the fake color of their hair as an indicator of their whiteness. The entitlement is visible and palpable, and it’s extraordinarily clear that it is founded in the perception of their self, and the exploitation of (literally) color-treated blonde hair. Isn’t that absurd, how tenuous and propped up one’s self-perception can be?

About five months into my life in Mexico, I took my blondeness back into the territory of subversion, wearing unnatural tones. And then I cut it off. I knew it was time to step away from blondeness and go natural. I had been observing and witnessing the dynamic around colorism and bias. I was becoming committed to disempowering myself. Once I began to see, I chose to decodify.

It was a powerful transformation—not the hair color and length, and not even the shift in people’s perception of me, but coming into a crystal clear understanding of what aesthetic codes and symbols were seen to make me who I am.