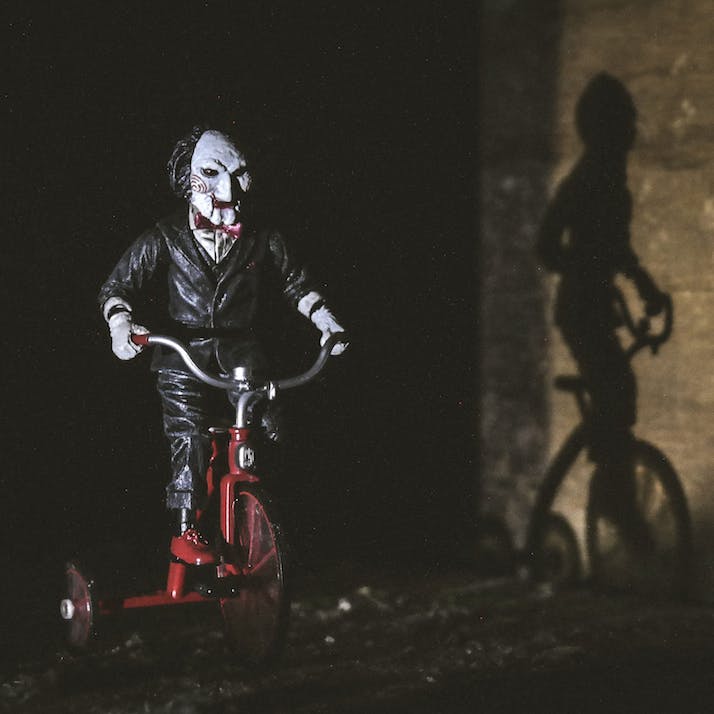 My Life Is Horror Films

Bloody movies help me process the trauma that surrounds me.

I think the appeal is that I like to chase the bad feelings. It’s part of the same weird practice of saying the absolute worst thing that can happen out loud so it can’t actually happen. Horror is a way of managing emotions in my life that have been out of my control.

I wasn't allowed to watch horror movies when I was growing up, and had no real interest in them until I was 16 or 17, when for some reason I decided to make my way through the entire horror section of our video store. My mother got her master's degree as a reading specialist in night school when I was growing up, and she encouraged us to read, and read anything, so I devoured Stephen King, Richard Matheson and horror comics. But I didn’t really consider it important to me until I engaged with the movies. I remember watching Alien with the sound off, hunched in front of the TV while my father was passed out on the couch. I watched The Toxic Avenger at 7 a.m. on a weekday in the emergency room where my mom worked nights. I remember not because of the movie itself, but because I was waiting for the school bus in my Catholic school uniform next to a man with a gigantic leg wound bleeding through a bath towel.

My Trauma Made Me a Horror Fan

Growing up, my father was an abusive addict. As I got older he became violent towards me and my sisters. He somehow got far worse after he sobered up. And he took advantage of my mental illness to keep me on hand to take care of my housebound grandparents. As an adult, I have pretty severe anxiety from post-traumatic stress. I had agoraphobia and didn’t leave the house for several years, leading to a suicidal crisis in 2016.

My family had a home invasion in 2012. My uncle, a former Rolling Stones roadie who had fallen in with white supremacists at the end of his life, had died with some heroin in his possession. Some people came around to get it while we were home. No one got hurt, and the cops never got called, but it scared me. We lived on a dirt road in rural Pennsylvania. My room faced the driveway and I’d see headlights through the blinds at two in the morning. For a long time after that incident, every time someone drove past I tensed up, waiting for them to turn in and light up the window.

I don’t think I was working through the trauma, in the way that people commonly talk about. Instead, it was a trauma I could have distance from—like they say, “It’s only a movie”. Even the most realistic, most upsetting mutilation scene is still more of an object than any real problem someone could be experiencing.

I find horror to be intense or disturbing, or even disgusting, but rarely ever scary. Horror films are efficient. Alfred Hitchcock’s geometric approach to suspense and perspective is the grammar of most modern cinema, period. The slasher movie’s rigid structure gives filmmakers space to explore their idiosyncrasies. But we sometimes punish horror for being too effective. The game of identifying with a character on-screen, and how that shifts, is more cathartic sometimes than the explosions of violence that punctuate the suspense. I don’t know that I watch Dawn of the Dead or Last House on the Left to be scared, so much as to use them as a black box of stories where I can process the things I’m actually scared about.

The most intense of these films access how vulnerable they make you feel when you encounter the dangerous aspects of the real world: a movie like The Strangers, where the lead character asks why the brutal home invasion at the center of the story is happening, and the reply is, “Because you were home”.

“”
Zombies aren’t something that keeps me up at night, but the end of the world is.

Horror Movies Are Scary, but Real Life Is Terrifying

When I was looking for an apartment in New York in 2019 I was deeply suicidal. When I wasn’t commuting to the city, I would sit and watch Day of the Dead over and over. The third zombie apocalypse movie in George Romero’s trilogy, a movie that very specifically has no hope: Some scientists—only one of them a woman—and army guys sit and experiment in a bunker in Florida as the whole world seems overrun. Empty. The savagery of the people sitting waiting for the end to come is much scarier than the endless hordes at the gates. It starts in a nightmare and never really leaves it; it never gives any false hope, not even once.

It felt (and feels) like the only sane thing to do was cultivate that feeling.

Zombies aren’t something that keeps me up at night, but the end of the world is. A semi-fictional thing to worry over instead of what was really bothering me: changing my whole life without a support system, a job or a house lined up. What I was even doing, trying to make a change like this?

The Texas Chainsaw Massacre is scary. The brain surgery scene in The Dark Half is terrifying. David Lynch is disturbing. Rosemary’s Baby, with the idea everyone in your life knowing what’s better for you, is terrifying. When my mental health was at its lowest, I would repeat “all of them witches” to myself and laugh, because there isn’t a coven of witches out to destroy you. There are no body snatchers, no killers in masks standing out on the treeline. There are only unending questions about what happens and for what reasons.

Our day-to-day lives are a lot more violent and unstable than we’re allowed to acknowledge. Sometimes you just want to rev up your anxiety far enough to bury the needle, just to know that it has a point where it can’t go any higher. Movies end. Life doesn’t. When director Wes Craven realized kids were watching his movies, as a way to inoculate themselves against real horror, he called them “boot camps for the psyche.”

“”
It’s still been the best year of my life.

Part of a great horror movie’s appeal is power fantasy. The “final girl” thing, where the perspective of a serial killer eventually shifts over to their victim as they overcome them, is so natural a storytelling idea that it’s hard to think that it’s only a couple of decades old. There is catharsis and there is also the knowledge that this isn’t happening and we’re watching a movie. The best horror films treat survival as victory. What happens that’s so radical in Texas Chainsaw and Halloween is that you, the viewer, have made it though at all.

I haven’t spoken to my father since he attacked me in January 2017. I haven’t had contact with the rest of my family in over a year. I finally moved out of the decaying resort town I was raised in and moved to the city right before a global pandemic. It’s still been the best year of my life.

Of course, everyone loves to fantasize about revenge, or making “living their best life” into a form of revenge. But cathartic conclusions rarely happen offscreen. What I’ve learned from slasher movies is that the only victory is survival. The world will inevitably change and lash out. The lesson of these movies, beyond everything else, is that the scariest thing you can imagine can happen. But also that you can live through it.