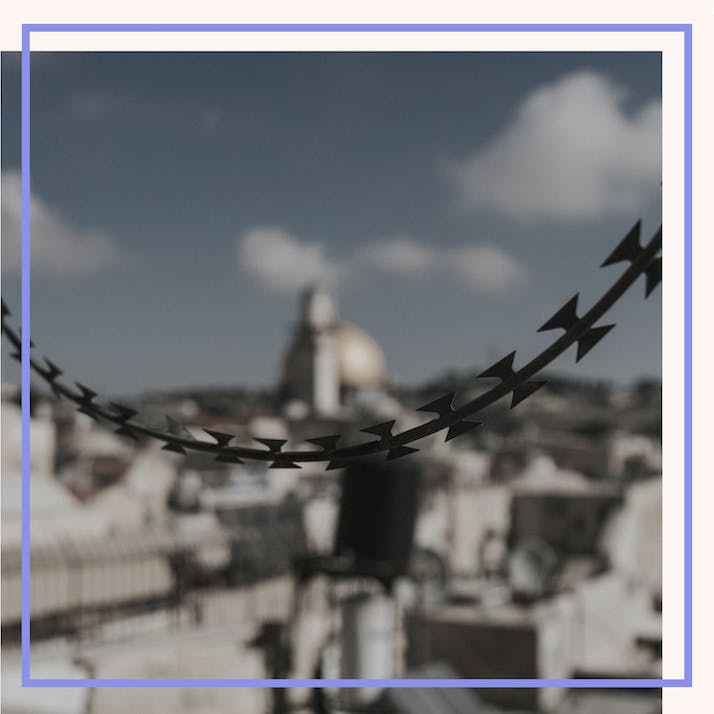 It is only with Palestinian liberation that Jerusalem can return to herself as the multi-faith spiritual center of solidarity.

In recent days, the world has woken up anew to the ongoing violence between Israel and Palestine. If 2020 taught us something, it’s that unaddressed systemic issues that are continuously ignored will eventually erupt into collective consciousness. This moment is one of revelation surrounding the pain and trauma that the land and people carry across generations.

Jerusalem has been in flames for some time now. A city that holds spiritual meaning to multiple faiths is a divided one, separating between the West and the East. This separation is far from equal. Palestinians live under militarized occupation with very little resources in East Jerusalem, while Israelis enjoy the luxuries of a capitalistic, well-tended city in West Jerusalem.

“”
Suffering on all sides is incomprehensible.

I Feel a Sense of Isolation in My Community

I was born in Jerusalem and grew up with a deep love for the holiness of this land. I am Jewish and my family has been living here in Jerusalem since way before the creation of the State of Israel. The Jerusalem I know and love is a city of multi-faith connection and collaboration.

But with the ethnic cleansing of Palestinians, this reality has become ruptured. Instead, Jewish supremacy is acclaimed and indoctrinated. On a land that has been my home for centuries, I find myself feeling a sense of isolation. The depiction of the struggle as “Arabs versus Jews” erases me and my history.

When violence in Israel-Palestine erupts, it is simple to see it as a conflict between two peoples. Yet, the asymmetry in power challenges this framing. How can this be a conflict when one group is systematically denied basic human rights? Even though all who live here suffer when violence arises, the dynamics of oppression must be named and understood.

It’s Important to Understand the Context of Israeli Colonialism

The Israeli government has been provoking Palestinians for decades: Stealing land and evicting families from homes they’ve lived in for generations; denying their narrative and right to their history; and enabling anti-Palestinian violence with no consequence. And of course, the massacre of Gaza. When the international media starts reporting on recent events in the Holy Land, we must understand the backdrop of ongoing settler colonialism.

From marches in Damascus Gate chanting “death to Arabs” to attacking protestors at Al-Aqsa, the Israeli side has initiated this latest round of violence. The forced evictions of families in Sheikh Jarrah began with Palestinians hosting peaceful iftars every night as an act of resistance. They were met with police violence.

Moreover, Israeli settlers have been organizing marches across mixed cities with the goal of harming Palestinian people and businesses. There have been lynchings and acts of violence targeting civilians. Many Palestinians were scared to leave their homes and removed any identifying objects around their homes and cars because of this rising anti-Palestinian violence. This violence comes from Israeli civilians but is backed by the Israeli police, the IDF, the government and U.S. money. Even if Palestinians fight back, their fight is not a match to this level of institutional violence.

Israelis have also been lynched and targeted during this time. Suffering on all sides is incomprehensible. And still, with the level of police brutality, militaristic force and state-sanctioned violence against Palestinians, the world outcry is valid.

“”
It is only with Palestinian liberation that Jerusalem can return to herself as the multi-faith spiritual center of solidarity she is meant to be.

We Cannot Return to Normal and Enable Occupation Again

As someone who travels between both the Israeli and Palestinian communities, I see the levels of pain and trauma that this vicious cycle of violence creates for all people on this land. And still, the last couple of weeks here I have been more concerned with the safety of my Palestinian friends. Even though the experience of war is not pleasant for anyone, Israelis are largely protected and can carry on their normal lives even in the face of rockets. But who is protecting Palestinian people against the brutal and cruel militarized occupation?

Palestinians have a right to defend themselves. Palestinians have a right to build a movement of resistance. In oppressor and oppressed dynamics, both identities suffer. Yet the oppressor has a layer of denial that doesn’t allow them to see the reality as it is. This denial represses their own pain and suffering as well as the reality of the oppressed.

While many may want this ceasefire and a return to “normalcy,” this view does not allow for a recognition of the systemic issues that led to this moment. Normalcy is not acceptable because it enables occupation and colonization. The growing Palestinian resistance will not end with a simple “agree to disagree,” but with a demand for freedom and justice.

It is only with Palestinian liberation that Jerusalem can return to herself as the multi-faith spiritual center of solidarity she is meant to be. As a Jewish person, I pray and fight for this reality to manifest.