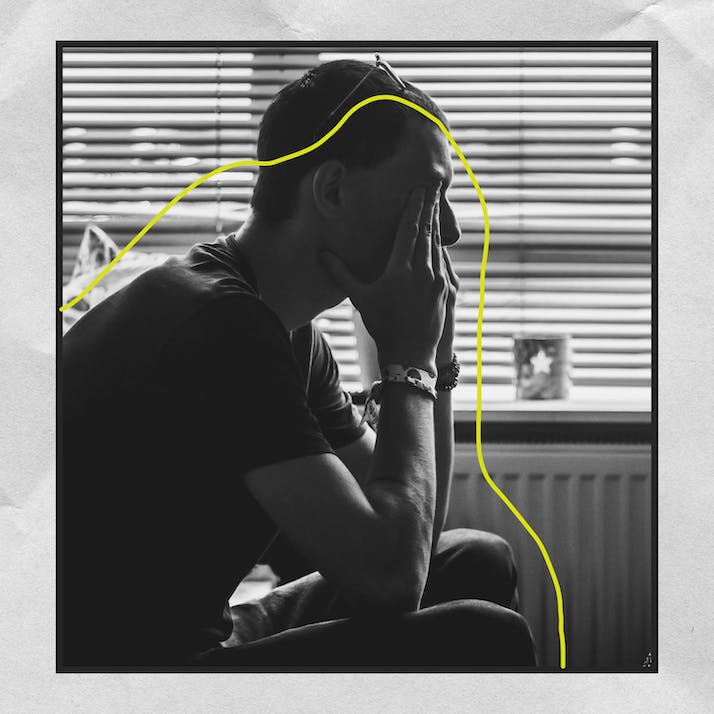 My Husband Was Having a Nervous Breakdown; I Never Noticed Until He Went to Jail

A wife tells the story of her husband having a nervous breakdown after the financial crisis.

It can be hard to see the forest for the trees. Especially when your life is going down the toilet.

That’s what happened to me in 2009. Economic collapse was looming and my family was in danger of losing everything, but I refused to accept how serious it was. That would have made it real, and I had no intention of giving this fire more air. My marriage was breaking down and every day felt like I was wading through quicksand, while all my husband wanted to do was talk about the economy and how close to the precipice we were financially. So, like a child, I stuck my fingers in my ears (figuratively, not literally—although I came close) and blocked him out.

He took to following me around the house constantly with this ever-present need to talk about our situation, and more than once, I found him waiting outside the bathroom to continue his monologue. This behavior was new for him, but as a couple, we weren’t doing well, and despite my unwillingness to listen, I knew we were in trouble. I wasn’t ready to have it spelled out by him. So I began to spend less and less time around him. Once the kids were asleep I got into my car and drove. Friends became used to seeing me arrive on their doorstep late in the evenings, desperately in need of a reprieve from my life. After a while, he stopped going to work and began spending all day at home playing Sudoku and laying around in his pajamas. I spent all my time being annoyed by him.

“”
Then the phone rang, and I heard the news that my husband had been arrested in Dubai.

I Realized Too Late That My Husband Was Not OK

When he finally announced that he needed to return to Dubai to attend to some business, I was limp with relief. I needed a break, as did he. He didn’t call when he landed, which was unusual, but his persona tended to change when he traveled to Dubai; he became solely immersed in his business affairs. Even when we traveled together, he had no time or interest in me once he was under the city’s spell. I was less enamored.

Recently, he had been making noises about moving there, and I knew deep down that if he did, it would be without us. But still, as hours ticked by I began to worry. My texts and calls went unanswered, and it appeared nobody had heard from him since he had left Dublin. I called his brother, who also happened to be his business partner, but he too seemed bewildered by the whole situation. A day turned into two. I was starting to really worry. Then the phone rang, and I heard the news that my husband had been arrested in Dubai. I began to cry.

Information came sporadically and made no sense to me. He had been arrested trying to enter the country after his passport had been scanned. A “complaint” had been made against him by a Dubai citizen regarding some financial irregularities within their dealings. To this day, I still don’t know if the complaint had any merit (he swore not at the time), but in Dubai, the process was to arrest and jail first, ask questions later. And by all accounts, Dubai jail is not a pleasant place to be, innocent or guilty. We hired a lawyer and, after some weeks, he was released with his passport confiscated until the entire matter was settled.

Seeing My Husband Having a Mental Breakdown Was Heartbreaking

A few days later, I kissed my kids goodbye and boarded a plane to Dubai to see him for myself. Our stilted phone calls since his release unnerved me a little. His manner seemed off and I was worried. Shaking with fear, I approached passport control in the Dubai airport, terrified that I, too, would be arrested by association, but I sailed through to find a man who looked like my husband (albeit a slimmer version) waiting for me on the other side. Three weeks in prison had certainly had an impact. His clothes were loose and his usually happy face seemed gaunt and etched with an experience I was sure he would rather forget.

He was smiling, however, which I took as a good sign as he steered me through the terminal to a waiting car outside. I had a thousand questions and, as we settled into the journey, I thought about where to start. He was having none of it. He brushed off the experience as inconsequential and mumbled about how it had actually been a positive thing, giving him time to think and plan for the future. Everything was going to be OK, he reassured me, but somehow, I knew he was wrong.

While I was visiting, we stayed with friends and it instantly became apparent that my husband was not OK. On the very first night, I woke at 3 a.m. to find he wasn’t in the bed beside me. I tiptoed down the stairs and heard him talking by the pool so I headed that way only to find him alone, drinking a beer and having an in-depth conversation with himself. The next night, he disappeared again. This time, security that roamed our gated community brought him back to the house. They had found him wandering around talking to himself again with no real idea of where he was. Talking to himself became a regular occurrence, as did scribbling notes in his battered notebook. Little by little, I began to notice so many changes in his behavior that I had no idea who this person was. He was manic, bossy, rude and dismissive, and I was confused by all of it.

“”
It instantly became apparent that my husband was not OK.

My Husband’s Breakdown Upended Our Family

By summer, the kids had joined us and we had rented a villa to spend time with him, but in reality, we rarely saw him. His previous financial woes seemed to have evaporated, despite the fact that weeks earlier he was warning me how we were on the verge of financial collapse. He was driving around in a Ferrari, spending money like there was no tomorrow, yet I was not allowed to question his actions, financial or otherwise. When he finally had his passport returned, we flew home and I knew deep down that I would never be returning.

Once home, his behavior showed no improvement and my pleas to get help went unanswered. I knew nothing, and he knew everything. After some months, I stopped trying. Our marriage eventually ended and although I knew he still needed help, I had my own struggles. Plus, he made it easy to ignore his obvious mental distress. Six months after his release from prison, he flew back to Dubai on yet another business trip and we never saw him again. He abandoned everything, including his family and his business. He conned and cheated his friends. His illness told him it was the right thing to do. He stole, lied, cheated and betrayed the trust of everyone he knew until, in the end, he had no one left but a raft of enemies who weren’t open to hearing excuses about nervous breakdowns or mental illness.

On reflection, the consequences of the decisions that he made when he was very obviously suffering from a breakdown changed the path of his life and the life of his family. Years later, when he emerged from the fog and began to heal, we both finally said, “I’m sorry.”