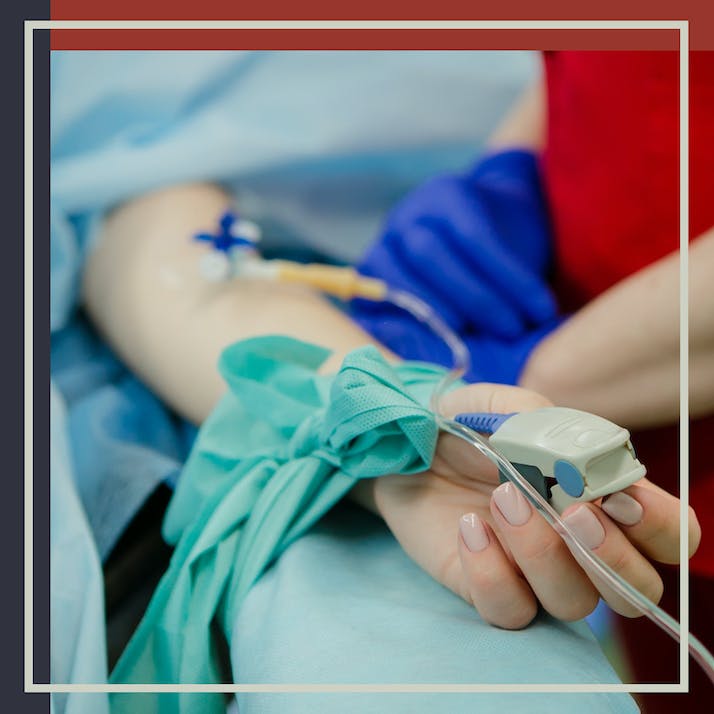 My Horrific Experience With Anesthesia

After a recent surgery, I woke up seething in pain. It was one of the scariest moments of my life.

After having several procedures in my life, including an emergency C-section, emergency dilation and curettage (D&C) and others that required sedation, the surgery I was scheduled for just a few weeks ago seemed like a walk in the park. My surgeon explained I would only be under for 60–90 minutes max and that as long as there were no “surprises” while in the operating theater, I would be allowed to recover and go home by lunchtime. That was the plan. But that’s not at all what happened.

I’ve had my fair share of medical surprises that sidelined me. There was the time I needed several bags of blood due to a hemorrhage doctors couldn’t get under control. Or the time I went to the OB-GYN for an ultrasound at 36 weeks pregnant but was sent across the street to the women’s center due to placenta previa concerns and held my child in my arms less than two hours later. I know to expect the unexpected and roll with the punches.

I Was Looking Forward to a Quick Procedure

This day, however, was much different. After three nurses failed to get an IV into any vein in my body during pre-op, the anesthesiologist appeared, ready to apply his expertise. Super witty with a bubbly personality, he seemed to really love his job. He explained that he enjoyed being the one person that had the power to relieve people from their pain and give them a bit of a rest while the surgeons did their thing in the operating room.

That made sense to me because each time I was put under, I looked forward to it. This was a rare moment when I wasn’t in pain or fretting over the issues I was dealing with in waking life that severely altered my quality of life. That swift descent into sleep is something that I welcomed. And of course, waking up from anesthesia, having completely left my filter behind and saying ridiculous things, had always been the highlight in the middle of uncertainty, anxiety and fear. So going into this procedure, I was excited to take my two-second nap. When you go under, you’re extremely sleepy for a few seconds, then you wake up in a different room having already had the procedure done. It’s a really strange feeling, but it’s also refreshing to know you’re on the other side of the surgery itself and on your way to recovery.

The anesthesiologist found a tiny vein on the inside of my left wrist, inserted the IV and taped it down. It was so close to the skin that if I bent my wrist at all, you could see it try to break through the skin. It was painful. They began to wheel me back to the operating theater, and I started to feel weightless from the first burst of whatever was pumping through my IV. Lights began to blur, and the sounds around me were muffled. The anesthesia was starting to kick in. Let’s get this over with.

I Woke Up From Anesthesia in Excruciating Pain

By the time I made it to the operating theater, I watched nurses and surgeons walking around all masked up, but I didn’t see anyone I’d been introduced to just a few minutes earlier when they were getting me prepped. Masked figures walked around above me, sticking patches all over my chest and my hips. The one person I did recognize, a beautiful, blond, pregnant nurse that had said she would be by my side through recovery, was above my head putting a gas mask on my face and asking me to breathe in slowly. I remember breathing in once, twice and on the third breath, falling under.

I woke up at what felt like one second later in the most excruciating pain I’ve ever had in my life. I felt everything. Every sensation. The cuts, the stitching, the pressure from having just had the procedure done and organs clearly tugged and pulled in different directions. A burning hot knife felt as if it was being slowly pushed inside my stomach. I remember screaming and frantically begging for help. I was connected to machines via tubes on both sides of my body. I remember looking around the room and the nurses all looking at me like I had eight heads. They were in as much shock as I was and began to shuffle all around me—checking vitals, looking at my IV, an older nurse tap, tap, tapping at the computer. I remember holding my abdomen where I had just been sliced open and saying, “It hurts, it hurts! Please, God, help me!” I didn’t recognize anyone nearby, not even the beautiful mother-to-be, as promised.

Soon after, I woke up in a different room. I wasn’t sure how I got there or how long it had been since my first time waking up, but it felt like I’d just blinked my eyes again. I was alone. The pain was still there, and it was every bit as intense as before. I started back up with the “please help me, it hurts” bit because it did, very badly. This was not normal. The windows were open and the sun was blinding. There was a TV, bathroom, etc. I had compression cuffs on my legs and wires and tubing connected to me still, so what was going on? What happened? Was I OK? Had I gone into shock? I was still screaming in pain when my husband walked in. I wasn’t aware of his arrival until he touched my arm to try to calm me. I looked up at the clock. It was 2:15 p.m. My surgery started at 7:30 a.m. Why was I in this room alone, and what happened to all of that time? Did something go wrong during the surgery?

“”
I felt everything. Every sensation.

My Surgery Experience Was Beyond Traumatic

A new nurse walked in, telling me they had ordered something for my pain and she was going to get it. When she returned, I tried to ask her what happened, but she said she was just assigned to me as a patient and hadn’t been part of the surgical team. The nurse gave me two tiny pills, which I took, my throat still scratchy and sore from the tube that had just been removed. The medicine kicked in some time later, but as with any anesthesia, my sense of time was nonexistent. A young male doctor I hadn’t been introduced to then came in and explained to me that the surgery itself was perfect, textbook even. Everything went well, and there were no complications. Blood was not needed, and the surgery was completed in just under 90 minutes.

The doctor explained to me that I had woken up early, before they were ready for me, and they weren’t sure why. Though the surgery was technically complete, no pain medicine had been administered at that point. They had just transferred me from the operating room when I woke up prematurely, surprising the staff in the recovery room and freaking out all the patients around me who heard my screams. He said they wanted to keep me overnight to observe me but explained that as long as I could pass a few tests, I could go home if I wanted. So I pushed through the pain and started the tests, proving I was able to walk, and they agreed to discharge me. I was released a few hours later, not making it home until 5 p.m.

I had still not seen my surgeon since before going under and was eager to get her account of what happened. The next day, the beautiful, blond, pregnant nurse—who was not in recovery, as promised—called to check on me. She corroborated the male doctor’s account of events, neither of them having an explanation as to why I woke up before I should have. I go in for my six-week post-op appointment next week and hope to get answers as to exactly what happened and to account for the hours of lost time. What I can say is this experience was beyond traumatic and something I don’t want to live through more than once.

I’m one of those rare individuals that knows what surgery feels like without pain management. It’s a badge of distinction I wish I’d never earned.