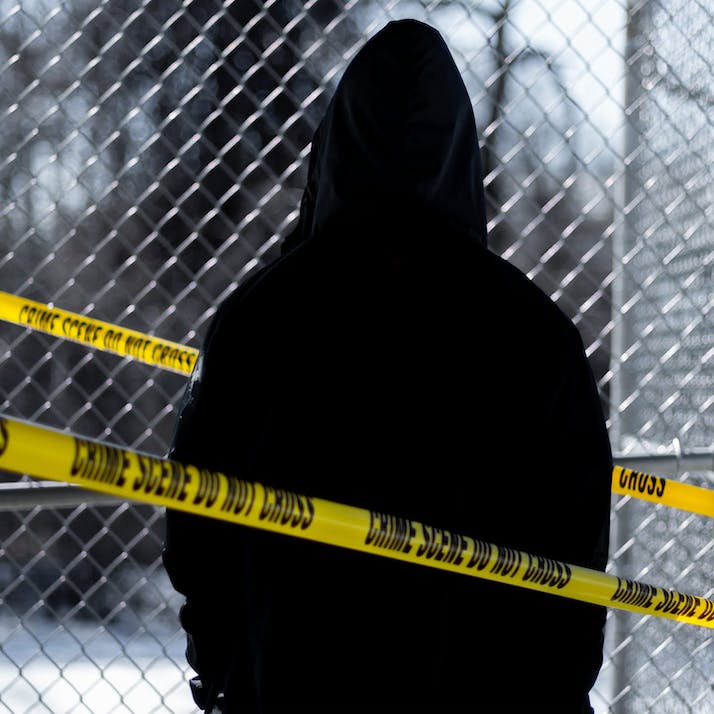 My Friend, the Murderer: Dealing With the Aftermath of Someone Else’s Violence

After he was sentenced to life in prison, I took stock of our friendship and how our paths diverged.

Ten years ago, my closest childhood friend was given a life sentence for murder. For that decade, I’ve been trying to come to terms with that.

Kyle came from what the judge would later describe as “a good family.” His parents were still together, and both had respectable, well-paying jobs. Kyle was their only child. They lived in a big house out of town, and as teenagers, that’s where Kyle and I would hang out after school.

Kyle was one of my smartest friends, but he was a rebel too. Like me back then. In summer, we explored old, abandoned factories together. We used to light firecrackers out in the desert, and, in later years, crude homemade bombs that we cooked up with farm chemicals in his barn. We were always trying to make a bigger explosion than the one before.

By our late teens, we were getting into drinking and drugs as well. One night, completely smashed, we spent hours rearranging traffic cones and diversion signs to create an impossible maze around town. We were planning to stay up all night to watch the havoc when the commuter rush began, but the cops caught us in the act. They eventually let us off but only after making us put everything back where it came from. Other nights, we'd just sit in Kyle’s room, drop LSD and watch Quentin Tarantino movies.

Kyle and I shared a self-destructive streak, and one time, we dared each other to down whole pints of vodka. It was an experiment in excess—part challenge, part bonding pact. We linked arms, locked eyes, then raised our glasses. The worst part of downing a pint of vodka is when you have to take your first breath. You gasp, and it bubbles up through the liquid in front of your face, and you realize you’re not even a quarter of the way through yet. It’s not like a shot, where the drink’s already in you before you know what’s happening. Drinking a pint of vodka takes patience. It doesn’t want to go down. It’s chewy, and your gullet tries to protest, but Kyle was still going, and so I kept going, too, arms linked, gagging and gulping, until eventually both those glasses were drained.

That night, Kyle and I ended up in separate bathrooms, heads down our respective toilets and then sleeping curled around the pot on vomit-smeared linoleum. Later that week, Kyle’s father cornered my mom in the supermarket. He said I was a bad influence and told her, “Keep your no-good son away from Kyle. My boy’s got great things ahead of him.”

I got the call almost 10 years later at something like 2 a.m. The screen said Tina, a name I hadn’t seen for a while. We’d been in a relationship years before and then Tina was with Kyle for a time, but we all stayed friends throughout. I guess she became just another thread that connected me and Kyle. When I answered, I immediately knew it was trouble. Tina was a mess, hysterical at first, but I told her to calm down, and she explained: “Kyle killed someone. Holy fuck, he actually killed some guy.”

The story wasn’t in the press yet, but Kyle had called Tina before getting picked up by the cops…and she didn’t know who else to share it with but me. The story I heard—the story that he told Tina—was more or less the same as what his lawyer would say in court: that Kyle invited some guy up to his apartment for drinks that night, but the visitor suddenly attacked him, and Kyle found himself fighting for his life. The only thing within reach was a baseball bat, so Kyle grabbed it and struck his attacker repeatedly in self-defense. He never meant to kill him.

The prosecution would tell a different story, though. They suggested Kyle had lured his visitor in, then assaulted him without warning—dealing roughly 20 heavy blows to the victim’s head and neck before hiding the body in a cupboard for a week. During that time, Kyle had apparently begun making plans to bury the corpse out in the desert. Character witnesses came forward to describe the victim as a popular, wholesome kid, a grade-A student who was loved by all he met. Meanwhile, Kyle already had a record for drug possession and other petty criminal misdemeanors. It didn’t look good.

I spent the next days and weeks in a daze trying to process it all. When the newspapers got wind of it, I started to see my old friend’s name in the headlines. They called him a brutal killer, a monster, and the judge said something similar, too, when the case eventually wrapped up and Kyle was sentenced to life in prison.

But you don’t know him, I kept thinking. I believed the self-defense story 100 percent. I figured Kyle must have been pretty messed up on drugs when it happened and that afterward, stuck in his apartment with a dead body, he’d just freaked out. Kyle wasn’t really a tough guy—he was a rebellious middle-class kid who liked to look tough in front of his friends. When it came to dealing with a dead body, I assumed his only frame of reference was exactly the same as mine: all those Tarantino movies we used to watch. So I figured his drugged-up brain had just switched into Hollywood mode as a way to cope with the shock. He started planning how to bury the body in the desert because that’s what guys in the movies do.

Kyle had really fucked up this time. But giving him life for it just seemed impossibly cruel.

“”
The only thing within reach was a baseball bat, so Kyle grabbed it and struck his attacker repeatedly in self-defense. He never meant to kill him.

Kyle Had a History of Committing Dangerous Shenanigans

I will say this for Kyle—he threw an awesome house party back in the day. When his parents went away, we’d gather at the big house on the edge of town and turn the music all the way up. They were messy nights. This one time, it was already morning and I was ready to pass out somewhere when Kyle asked if I wanted to come for a drive in his dad’s Mercedes. “No fucking way,” I slurred as I slipped into a drunken sleep. When I woke up, I’d heard how Kyle and two others had gone out and lost control of the car on a corner in the road and flipped it upside down into an alfalfa field. They all clambered out just fine, but the Mercedes was wrecked.

At one of those parties, someone snuck into Kyle’s parents’ bedroom looking for a place to sleep, have sex, do coke, whatever. But they came back out holding a framed portrait, a little ornate thing they had found on Kyle’s mom’s bedside cabinet. It was a photo of Kyle as a toddler, dressed in a white lace gown, with rosy cheeks and long blond hair. This child looked perfect, pure, like something between one of Michelangelo's cherubs or a sacrificial victim. Their golden boy. We all had a good chuckle, but we put the picture back before Kyle knew we’d seen it.

Gradually, the crowd at those parties changed over the years. Kyle was mixing in new circles, hanging out with older, tougher guys, some serious dealers, too, and from one party to the next, the mood changed until I started to feel like a stranger in that house. At some point, I just stopped going to those parties. By our 20s, Kyle and I were growing apart and into different people and ultimately ended up living in different cities. When I did occasionally see him, dressed in a hoodie and hanging out with his new crew, I’d always think back to that cherubic photo of him beside his mom’s bed.

I’ve Had Nightmares About Killing Someone

A few times, I’ve dreamt I was there in Kyle’s place.

I’m pinned to the floor by this stranger. I picture him huge, as an angry behemoth twice my size, bloodshot eyes and fists big enough to crush my skull. He has me by the throat, and I realize this is it, that these could be my final moments of life. I can’t get out from under him, and my arms flail about the floor, jerking desperately like a fish on dry sand, until my fingers brush the edge of something solid. I grab it, hard, then swing up to connect a heavy bat into the side of my attacker’s head. He reels from the blow, but he keeps on squeezing at my throat. I hit him again and again. He slumps. His grip loosens. I tip him off me and wriggle free. Maybe he lunges, grabs at me, and I hit him one more time around the head with this wooden club.

I can imagine all of that. I can play it out in my head, just like the defense lawyer told it at the trial. But here’s the thing that still bothers me now. What I can’t imagine, in any version of this fantasy simulation, is then standing over the body and swinging that baseball bat down towards the stranger’s head another 16 times until that head is not a face anymore, just pulp. I simply can’t summon that kind of rage. Not even in my nightmares.

“”
Kyle had really fucked up this time. But giving him life for it just seemed impossibly cruel.

I Hope That My Former Best Friend Can Find Peace

The last time I saw Kyle was in a dive bar in our hometown, maybe just a year before the incident. When I walked in, he was sitting in the back, alone, waiting for someone. I was there to meet someone, too, but I imagine we had quite different nights ahead of us.

We shared a beer while we waited. It was friendly, familiar and we laughed. But there was never a moment when either of us suggested getting our friends together. We both knew, without words, that we were driving in different lanes, heading in different directions. That last beer we shared felt like stolen time.

After the trial, the victim’s parents spoke to the press. Through tears, they said they hoped that Kyle found peace someday and found a way to heal whatever it was that led him to beat their son to death. I wish that for him, too.