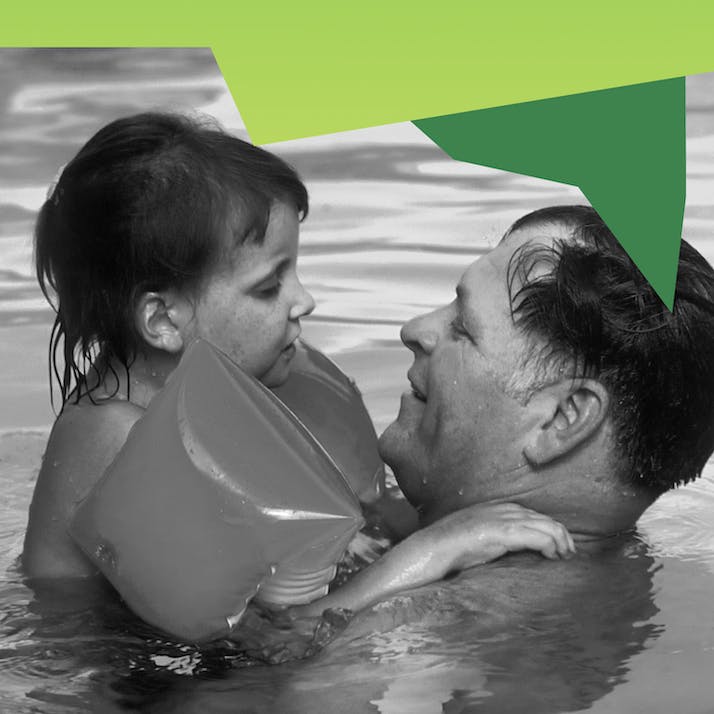 I'm an Olympic Gold Medalist: How My Dad Made Me the Athlete I Am Today

We were never the best athletes in the pool, but a shared competitive stubbornness helped us lead our teams to national championships 45 years apart.

Following in someone’s footsteps can be a blessing or a curse. For the most part, following in my father's footsteps has been a blessing. People call me his twin—our looks, personalities and professions are very similar. Some traits he passed down are good, like his generosity, hardworking attitude and positive perspective. Some are not-so-good, like his impatience and stubbornness. But I like to think we’ve both used this stubbornness to our advantage.

My father and I were never the best at our sports. We didn’t have talent like some others, but we did have a competitive spirit (the stubbornness) that pushed us. We may have not won the individual accolades, but we both gained an even bigger sense of fulfillment by reaching our potential. In our own respective ways, we were able to prove people wrong and show them what we always knew and believed: that we deserved to make it on the world’s largest stage, the Olympic Games.

“”
We both gained enough respect to become captains our junior and senior years and led our teams to national championships.

My Dad and I Both Had to Prove Ourselves in College

Our roads were extremely different. My father grew up in a tiny town. He didn’t even have a proper training facility but still managed to become an outstanding swimmer. He gained enough recognition to be offered a scholarship to college, his way out. On the other hand, I had all the resources and ingredients for success, but I wanted to pursue two sports—water polo and surfing, nowadays a suicide mission due to the high demands and rigorous training schedules. This was the beginning of people questioning my commitment and writing me off.

Because my dad was a two-time Olympic swimmer, he started me in the pool at a young age. But there was something missing. I was never excited to race against times and stare at a black line—especially not for the next 25 years of my athletic career. What was missing was being a part of a team. What was missing I found in water polo. To this day, I believe working toward a goal with passionate people is one of the most fulfilling parts of the journey.

Surfing, however, came very naturally into my life. No one in my family surfed, but I grew up blocks from the beach. As a competitive tomboy, I wanted to compete with my friend group. The latest hobby at that time was surfing, so I fell in love, and the hobby grew into a passion that soon led to a career.

Even while I surfed, I managed to gain enough recognition in water polo to be recruited by the University of Southern California, my dream school, where my father attended. However, being a two-sport athlete hindered my scholarship opportunity. I used it as motivation to prove the coach and everyone else wrong—just as my father proved that a small-town kid could keep up with those in his collegiate program. We both gained enough respect to become captains our junior and senior years and led our teams to national championships some 45 years apart.

My Dad Shared Stories and Wisdom While Visiting Me

My father came to campus a lot during those four years, partially to relive his glory days and partially to watch his daughter enjoy hers. I remember many times walking around campus and listening to his stories. You could see how proud he was that I was able to embrace the same culture, school spirit and competition that he did.

If only my younger self would have realized how fast those days would go and how truly special they were. My father gave me subtle reminders to give it my all, to leave everything in the pool, reminding me that it goes by in a blink. I’ve saved some of those text messages to this day. Fortunately, both of our careers didn’t stop after college. We worked our way to the Olympics not once but twice. It’s a feat that we don’t talk about often but both recognize it as one of the most special shared experiences.

I still remember the day. My college coach organized individual meetings to tell us if we would make the Olympic team or if our dreams were shattered. You could feel the tension in the air as you walked on deck. Four years for this one moment—but by that point, you have a pretty good idea of who is going to make the team or not. I was pretty confident with my position, but it’s still a scary place to be until it’s official.

After being told I was an Olympian and tears were shared, my coach said, “Your phone call with your dad will be a special moment.” He was right. I gave my dad a ring from my car and, like many of our conversations, we didn’t speak much. Instead, there was just a mutual feeling. “I’m in,” I told him, and you could hear his voice crack and sense him holding back his tears as he congratulated me and told me how proud he was of me.

“”
I told him, and you could hear his voice crack and sense him holding back his tears as he congratulated me and told me how proud he was of me.

Throughout the chaos of celebrating my biggest wins—an NCAA championship and Olympic gold medal—my father locked eyes with me from the stands seconds after the pool buzzer sounded. It didn’t matter what was happening around us, we were going to find each other and lock in. That eye contact, even for a split second, said it all. It was the acknowledgment of the journey that we’ve shared together. The acknowledgment of all the good and bad that comes with reaching the top and sharing it with your family.

The overwhelming feeling of reaching your lifelong dream is indescribable. I remember raw emotion taking over my body and tears rushing down my face. Mostly tears of joy but also of exhaustion and relief. After winning, the team jumps into the pool to celebrate, you wave to your family in the stands, you’re rushed to change into your podium gear, the award ceremony happens, the gold medals are placed on your neck as the national anthem plays. As soon as that’s over, you run to the stands and finally get to hug and cry with your family, and then, you’re rushed away again for drug testing while reading a million texts on your phone. It all felt surreal. Did this really happen? Did we just win a gold medal at the Olympics? Did we achieve our lifelong dream? Six years have passed and I sometimes still ask those same questions.

Being the daughter of a two-time Olympian may seem like pressure, but I am so thankful for the way my dad mentored me throughout my journey. It was never forced nor planned. He gave me the space to create my own road and for that, I’m forever grateful. I just so happened to make similar choices, which ultimately put us in similar places. Being able to compete for the same university and on the world stage makes our father-daughter relationship unique and special beyond words.

Thank you, Dad, for being a role model, paving the way and loving me through it all. Happy Father’s Day.