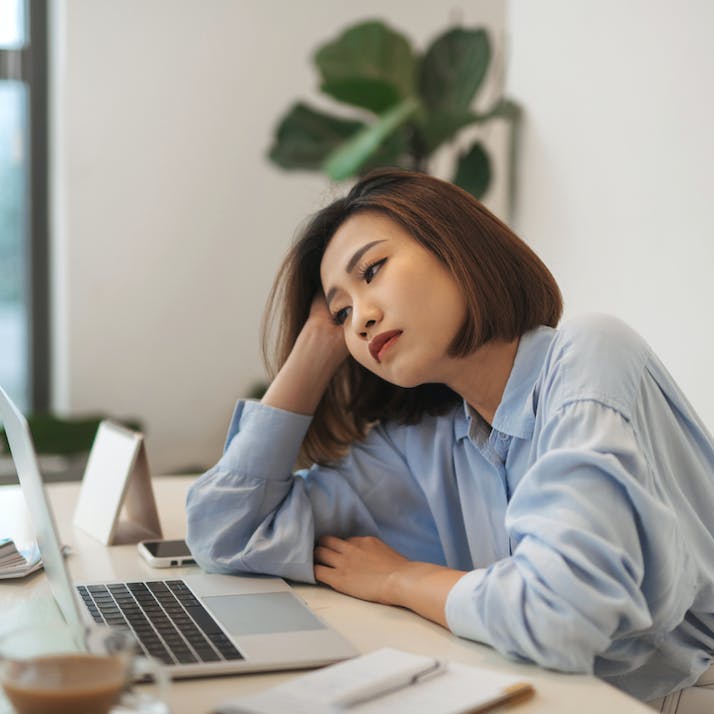 Writing from Paris, the author tells the tale of an astonishingly 2020 experience.

I stopped retching just long enough to un-mute myself from the call.

“Good idea,” I sputtered. “Let’s ask Leah to—” before quickly swiping a sweaty finger across the mute button just as another wave of hot vomit shot out of me and into the bathroom sink. Not into the toilet—it was occupied.

I was sitting on it to bleed out my first fetus. Zoom call number 57. First abortion.

We were a week or so into lockdown here in Paris when I started to think something was off. Annoyingly, the symptoms of pregnancy are essentially the same as the symptoms of PMS (huge, aching breasts, cramps and headaches, cravings), so, initially, I didn’t think anything of it. I knew it was something to worry about, though, when I couldn’t stomach a glass of wine. Or a vodka-tonic. Or a cosmopolitan. (During a pandemic, being solo in isolation sure does make you reach for the sauce).

Sure enough, the following morning a plastic stick told me there was a croissant in the oven. “Merde,” I said to myself sarcastically, and then laughed into a groan as I remembered that it was also Mother’s Day. Great timing, womb.

The punchline quickly wore off, though, and the horror began to sink in.

How the Coronavirus Makes My Abortion Story Different

I genuinely had believed that I was barren based on an absolute bare minimum of scientific evidence (polycystic ovaries and both a raging fear and loathing of pregnancy). I was convinced that my terror, hatred and anxiety had burnt away my womb into a desert.

Of course, because the toast always lands butter-side-down, I’d made my Nobel Prize-winning discovery during a global pandemic, in a country whose language I do not speak fluently, and at a time when we need permission slips to leave the house. France is as socialist as nations come, but the thud of horror winded me in the chest as I wondered if abortions would be considered “essential medical services” during the confinement, and had a flash of me growing more and more pregnant until all this was over. It felt a bit like the scene from Twilight when Bella’s vampire baby is killing her from the inside out.

Doctors' appointments were down to less than a skeletal schedule, filled with what I assumed were worried Parisians fearing that they had COVID-19. When I clicked the “English spoken” filter to show “appointments near me,” that schedule dissolved to nothing.

Well, this would be a fantastic challenge to test both my skills in French and in mime.

In a queue ten meters long of just three people, I waited outside the doctor’s office for my appointment. A kind pair of eyes above a mask welcomed me inside and went through the basics of using the French medical service. This much I understood. When it got to the actual question du jour, though, I had to apologetically ask if he knew any English.

The shame of it. Of not knowing the language. Of taking up space. Of what I was about to ask him. I am still furious at this shame. I know that I have no need to feel shame about a choice that is better for both me and what would have been a very therapized child. I know that abortion is a human right. I donate to Planned Parenthood; I write articles about it. I debate it with friends all the time and still, I was feeling this shame?

Even now, I write this piece anonymously so that future employers won’t Google me and find my abortion story.

The Process of Getting At-Home Abortion Pills in Paris

The shame. The shame of feeling shame.

The doctor, of course, did not share this shame with me. As we continued in Franglais, he told me that the French procedures for this involve a blood test, an ultrasound scan and a week of “reflection” before anything could be done.

Why would I want to bring a child into the world? Why would I want to force someone to unwillingly exist, to experience the enduring pummeling of a lifetime? Particularly into this existence, where countries are literally both sinking and on fire, and a deadly virus is slinking its way around the globe. Why would I want to create something that would be dependent on me, and that I would, no matter how hard I tried not to, probably end up loving way too much? And possibly losing.

The blood test showed that I was indeed avec bébé, and also that I was blood type O positive. (You need to know your blood type in order to receive the most effective and least harmful dose of “the abortion pills”—typically two pills taken in sequence.) The scan showed both that I was about six weeks along and also an image of a little bean just floating along on the lilo of my uterus.

After my week of reflection, back to the doctor I went. She watched me take the first pill (mifepristone) in front of her. This pill stopped the pregnancy. The doctor told me to take the second pill (misoprostol) 28 hours later. The second pill causes your uterus to contract so the pregnancy can leave your body. Basically it forces your body to squeeze it all out of you. I’m advised to take it by letting it dissolve between my gum and cheek.

“”
The shame. The shame of feeling shame.

I Thought I Was Prepared for My Abortion Experience; I Was Wrong

“Maybe it’s good that we’re on lockdown,” I thought. “I can work from home anyway rather than have cramps in the office.”

I didn’t need my 6 a.m. alarm timer because I was awake all night with unexpected worry. I felt shaky, sweaty and sick, not so much with fear of pain, but more with fear of it not working. I let the tablet dissolve in the gum-spot and placed a sanitary towel as thick as a brick in my underwear. Within an hour I began to get what felt like normal period cramps, slowly increasing in intensity. Nothing unmanageable, and as the pain ramped up, I took some acetaminophen. It was just like a regular period, which was lucky because I had a day full of Zoom meetings, Slack notifications and emails ahead of me.

Throughout the day, nausea continued to rise up, hot in my throat. I ran to the bathroom a handful of times thinking I was about to hurl, but it was always a false alarm. The abdominal pain increased and I changed the towel at least twice.

“”
The blood test showed that I was indeed avec bébé.

I Found Out on Zoom What Happens After Taking Abortion Pills

I could feel myself shedding. It was distracting and, during one such Zoom call, the pain really began to get searingly sharp. I was on my laptop and the call was important. Jobs were being dissolved every day thanks to COVID, and I couldn’t afford to make an excuse and leave this call with 12 colleagues and my boss. I could feel the bloodshed change from a steady stream to more of a tsunami, so I muted myself and ran to the bathroom with my laptop, squeezing it with sweaty hands. My camera was off.

I got to the toilet just in time for the bowl to receive what felt like a hot load of thick, lumpy jelly pouring out of me. I screamed as I felt it. I knew this was it. This poor bean was making its escape from a life of pain and fear and being loved too much and not enough, and I was surprised (and embarrassed, the shame for feeling shame again) that I’d started to cry.

I stifled a sob to listen in to the Zoom call for a second. Luckily another colleague was pitching an awful idea to my boss, so I figured I still had a few minutes. As I let myself exhale again, it wasn’t a cry that burst out of my mouth, but that vomit that had been threatening all day. In what may be my most impressive yoga move to date, I leaned over to the sink while still keeping myself hovering over the toilet next to it and ensured everything leaving me found its way into the plumbing that wasn’t mine.

Panting, I rinsed out the basin and splashed water on my face. I sat back onto my China throne. The call was still going and another colleague was pitching an idea. My breathing slowed and I was able to contribute to the call again after 20 minutes of being AWOL, with a pause for the second brief vomit that began this story.

The call ended and I stayed in the bathroom with my laptop awkwardly at my feet. Within an hour, the bleeding and the pain sighed back to “regular period level” and the heaving and vomiting stopped.

It was over. I could finally have that glass of wine.