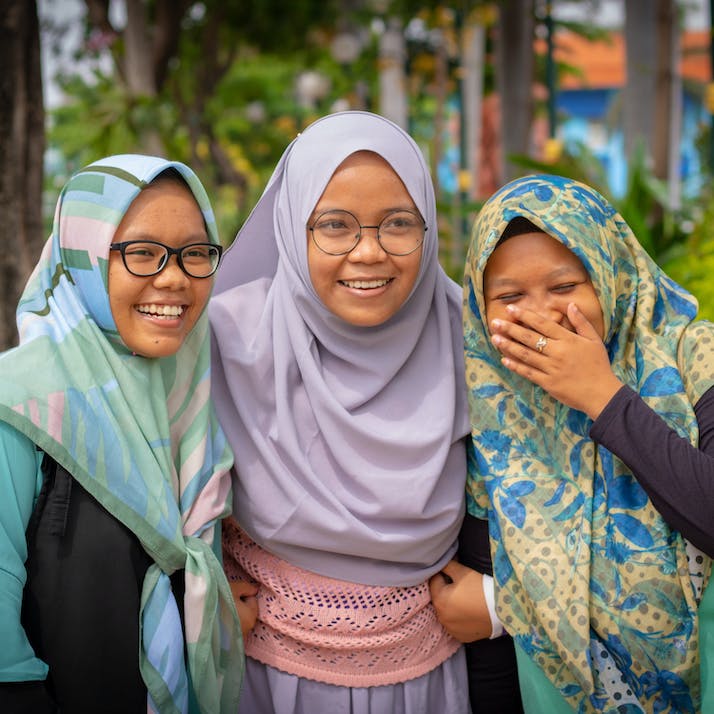 I can still remember the first time I was told I was ­forbidden fruit. I was around 17 and talking to a school friend at a party. I’m not entirely sure how it came up in our conversation, but he told me this as if I should already be aware. “Oh, didn’t you know? That’s what a bunch of the boys call you at school.” I was stunned and confused. I had not known.

I’m a second-generation Muslim Arab woman. I was born in the U.K., but I grew up in effectively two worlds. My parents raised us with a heavy religious and cultural influence, but when we left the house we stepped into Western society. That made a lot of things different for me compared to my friends and classmates. One of them was dating. My parents were very strict and schooled me from as young as I can remember that I wasn’t allowed to date or have a boyfriend at school. My only interactions with boys were to be only friendly—and even then, not too friendly.

“”
It made me think of mystery, secrecy and shame.

Dating as a Muslim Teenager Was Nonexistent

So I never had a high school sweetheart or brought a boy home. And, after the first few years of high school, this was common knowledge amongst my schoolmates. Friends eventually stopped asking me why I didn’t have a boyfriend, and boys stopped asking me out. I didn’t see it as an issue, and definitely didn’t think it was something that people cared or talked about. I went through most of my school years blissfully unaware that it was.

That was until my friend told me about the label the boys in my year group had given me. I suppose it’s strange for anyone to find out they’ve got an epithet attached to them that they weren’t aware of, but there was something particularly weird about being called forbidden fruit.

It made me think of mystery, secrecy and shame.

It also made me feel wanted, a feeling I wasn’t all too familiar with in a romantic or sexual context. It made me feel good about myself and gave me the validation that I’d only ever seen other girls get from boys. Like most young girls, I was always a little self-conscious about how I looked and how boys saw me. Did they fancy me? Did they think I was pretty? The fact that some were talking about me like that must’ve meant that they considered me attractive, I thought, and the only thing keeping them from asking me out must’ve been the fact that I couldn’t date.

I thought that way for quite a long time, and only recently have I started to unpack what my former nickname says about me—or the boys who gave me it. I realize now that being called “forbidden fruit” wasn’t a good thing or something that should’ve made me proud. The boys who called me that didn’t do it because of the way I looked or how I behaved.

They did simply because they could. And it was patriarchy and toxic masculinity that allowed them.

“”
The term 'forbidden fruit' is all about the perceived attainability of women.

My Nickname Was a Symbol of Patriarchy

The term “forbidden fruit” is all about the perceived attainability of women and how our availability is connected to the way men view us. The default for men seems to be to assume that all women are available to them, unless otherwise stated. I saw it in how men approached me during my time at university, and how some would only back off if they found out I was already taken. To them, women are only unavailable when another man’s involved, not because they simply aren’t interested.

A woman who’s been labeled “forbidden fruit” becomes an empty vessel, free from agency or choice. The men who call her that assume that if she wasn’t so untouchable, she might date them—completely ignoring that she has her own thoughts and might not be interested.

It’s a term rooted in power and serves to sustain such an imbalance between men and women. Men aren’t called “forbidden fruit” as far as I know. It’s a term that seems to be reserved only for women whom men “just can’t have.” It’s a power move.

What My Experience Taught Me About Human Validation

Did the boys who labeled me give any thought to how I would feel when I found out? Or the impact it could have on me as a young girl? Or what kind of long-term effects it might have? My guess is: probably not.

And yet it did affect me. More so when I found out, but sometimes even to this day, at age 25. It showed me that I looked for validation about myself solely in men’s eyes. Compliments were only meaningful to me if they came from men. I didn’t trust or believe the ones I got from women. And for a while, I valued my physical appearance over anything else. I wanted to be attractive so boys would notice me. I don’t know if this kind of thinking would have happened anyway, even if I hadn’t found out about my nickname, but it definitely contributed to its acceleration and intensity.

It’s taken me a while to unlearn these attitudes and behaviors about myself—and women in general—and to see this label for what it truly is: toxic patriarchy. This isn’t a unique story. So many women have experienced something like this in their lives, and maybe didn’t even think twice about it. That’s how normalized it is.

But I’ve noticed a lot more women calling out attitudes like this, even just within my own circle of female friends. These kinds of labels and perceptions of women are deeply problematic. It’s time we put a stop to it, like I wish I had all those years ago.