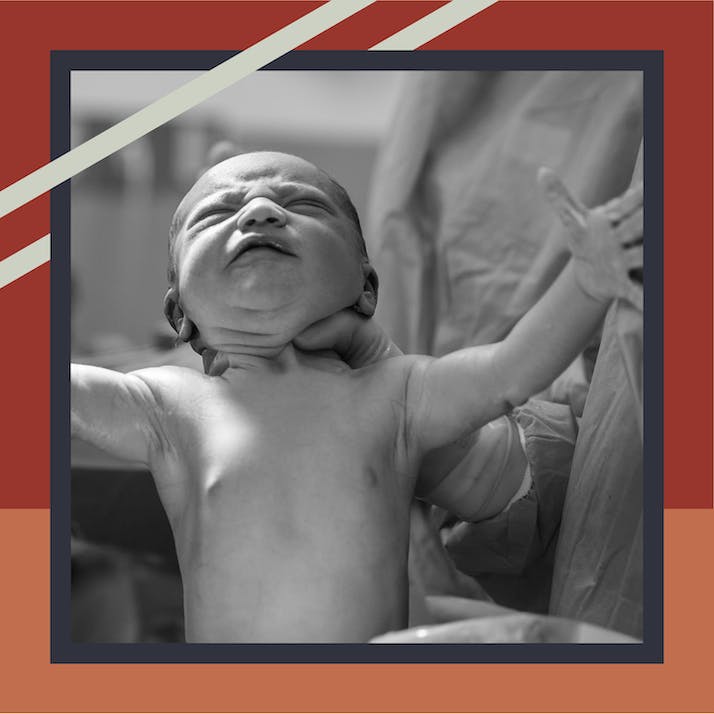 My wife and I had great neonatal care with midwives, but when we needed the hospital to deliver our fifth child, we had a very different experience.

My first four children were delivered by midwives in two different countries, and everything went fine and dandy (something especially easy for a dad to say). But when our fifth child was entering the world, my wife and I both got a rude awakening that we hope to never endure again.

Thanks to a possible complication with the delivery, my wife and I were involuntarily thrust into the world of corporatized, hyper-medicalized baby delivery. It’s an industry like no other. Cross Big Pharma with Big Brother and you get a sense of it. To call our experience unpleasant and dehumanizing would not do it justice.

The arrogance of the doctors and their fiendish desire to inject all sorts of dubious foreign substances into our new baby was beyond outrageous. Before our precious new child even arrived, the staff brought in a tray full of syringes, droppers and more.

More on that later.

Delivering a Baby Right With a Midwife Birth

First, it helps to know what delivering a baby can be like when done right. Our first two children were born in Sweden. And while I loathe government-run health care systems, the midwives we had were kind and very accommodating to whatever my wife and I wanted.

When it was time for the baby to arrive, we did go to the hospital. At first, it seemed weird to have no doctor. My family in America was shocked. But as time went on, it became clear that the midwives knew what they were doing and that our wishes as parents would be respected.

When we declined the vitamin K injection, that was it. No high-pressure sales tactics. No guilt trips. No shaming. No treating parents like idiots or worse. Just moving on to the next question about what we wanted in order to offer the best experience possible. The Swedes don’t even vaccinate newborns. And when the time came, all we had to say was “No thanks.”

The irony surrounding the respect for “consumer choice” displayed by a government-run healthcare regime in a nation known for hostility to individual liberty and parental rights did not hit me until our horrific experience at the American hospital. Later, I discovered that Swedish midwives are sometimes forced to participate in abortions. That shocked me to my core. How could the same woman who just helped deliver my baby also be involved in slaughtering unborn babies in their mothers’ wombs? Sick!

Fortunately, I didn’t learn that until after we left Sweden, or I might have freaked out knowing that the hands delivering my precious children also participated in shedding innocent children’s blood—children who probably would have sounded and smiled just like mine.

Birthing With a Midwife vs. a Doctor at an American Hospital Could Not Have Been More Different

My next two children were delivered by a hippie midwife in America. Again, aside from the pain inherent in childbirth, it went as well as it could. The midwife and her assistant were kind and respectful. We were never pressured to accept anything. Just like in Sweden, when we declined, that was the end of it.

When it was time for our fifth child to arrive, we did what we had always done: We called the midwife, called our friends to take our other children and hopped into the car to head to the midwife. Because my wife worried about not being able to go back into our home if anything traumatic happened, we never did a home birth, opting instead for the midwife’s facilities.

When we arrived, it was awesome. The delivery room felt like a beautiful bedroom. There was a king-size bed, jacuzzi, couch, paintings on the wall, a splendid bathroom and more. It was better than any hotel I’ve stayed in. The midwife on duty checked on my wife from time to time as she kept track of progress.

Finally, it came time to push. The screaming began and got louder, just as it always has. My wife is very modest, so she asked the midwife not to feel around too much down there. But as the screaming got louder and more intense, and a weird pain in her leg got worse, and the baby refused to come, the midwife finally decided to see what was going on.

Well, she determined that something—I won’t get too graphic—was swollen for some reason. So, she gave us a choice: Try at the birthing center, knowing it may be painful and complicated, or call an ambulance. Within ten minutes, paramedics showed up, looking terrified that this screaming woman might give birth in their ambulance.

At the hospital, an OB-GYN came into the room and examined my wife. Tons of nurses and other people—not sure exactly what they were for—came in too. And then I saw it: One of the nurses or orderlies wheeled in a tray filled with syringes, vials and stuff I didn’t recognize. As I held my wife’s hand, I made a mental note.

The first thing they demanded was a COVID-19 test on my wife. She was screaming in pain, so I told them we would decline that and that we did not have COVID. “Well, if you don’t let us test her, we’re going to have to treat you like you have COVID,” the nurse said. “We may have to separate you from the baby when it arrives.”

Are you freaking kidding me? I thought. What kind of insane asylum have we landed in? After talking briefly with my wife, we decided to consent but only under duress. It went downhill from there.

“”
It went downhill from there.

The Medical Staff Treated Me Like an Uninformed, Irresponsible Parent

Literally five minutes after we got in the room, the baby arrived. Everything went smoothly, though I overheard the staff talking smack about our decision to use a midwife. Then the pediatrician came into the room to inspect the baby. Almost right away, I saw her going for the tray. And so, without hesitation, I told her we would be declining all vaccines, as well as the vitamin K shot and antibiotic ointment for the baby’s eyes.

“Sir, I really must insist,” the pediatrician told me.

My blood was boiling, but I tried to keep calm. “Doctor, I must insist also,” I responded, knowing my rights under state law and my responsibility as a parent. “As his parents, we do not and will not consent to any injection or vaccination of this child.”

“Well, I’m going to have to go get you some literature,” the doctor snarled before storming out of the room.

At that point, we were informed by a nurse that they were going to keep us for “observation” for “another couple of days.” Officially, it was because my wife had taken some test five weeks ago that supposedly had to have been done four weeks prior to delivery. The baby was late, after all. But in my mind, it was retaliation.

What Happened Next Only Deepened My Medical Mistrust at the Hospital

Between an endless stream of “checks” with people barging into our room, the pediatrician came back with a bunch of propaganda from the Centers for Disease Control and Prevention (CDC). It’s hard to think of a source I would trust less—they’ve been doing the bidding of Big Pharma for decades. With all their insanity surrounding COVID, I would not trust the CDC to clean toilets.

My wife and I happen to be extremely well-informed on this issue. By divine providence, an editor asked me to look into the swine flu hysteria over a decade ago, right before our first child, for a cover story. Thank God. At that time, I had no reason to be skeptical of vaccines. But the more I learned, the more I realized something was amiss. It started when I looked at the federal government’s 1976 swine flu vaccine program that left large numbers injured and paralyzed. According to many sources, the shots did more damage than the flu itself.

Then I dug deeper. I found congressional testimony by polio vaccine creator Jonas Salk sounding the alarm about polio shots. Reading study after study, it became clear that vaccines were not nearly as “safe” or “effective” as Americans had been led to believe. Finally, I bought some books on the subject. It was settled: We would not be vaccinating our children. To this day, I feel it’s among the best decisions we have made, and we have made a lot of great ones, like homeschooling, for example. We know families whose eldest child was injured by a vaccine, while the unvaccinated younger ones are totally healthy.

At the American hospital, the pressure was on. But not one piece of the propaganda the doctor brought me included a single word on the risks—and there are many risks. Just read the package insert, or look at the billions the U.S. government has paid out to victims of vaccines ever since Congress granted vaccine manufacturers total immunity from liability.

When I asked the doctor for the package insert, she got really mad. “You’ll have to go down to the pharmacy if you want to see that,” she fumed. Hmm. Why all the obfuscation? Why not bring honest, accurate information so parents can offer informed consent? This was beyond disgusting.

The vaccine they were peddling was for hepatitis B, typically transmitted through sexual activity or intravenous drug use. Confident that my baby would not be engaged in either for a long time, I informed the doctor that we were standing by our decision and would not budge.

As for vitamin K, which is supposed to prevent internal bleeding in the very rare cases in which it happens, after carefully weighing the risks and benefits, we declined again. Yes, there is a risk, but there are risks to everything. One study I found linked vitamin K shots with almost double the risk of leukemia.

Plus, I trust God more than the corrupt medical establishment.

“”
With all their insanity surrounding COVID, I would not trust the CDC to clean toilets.

I Know the Science Behind Anti-Vaccination, and I Won’t Be Coerced Into Giving My Baby Vaccine Injections

To be clear, I have no doubt the doctors involved really believed we were just idiots who had fallen for “anti-vax” propaganda on the Internet. And I have no doubt that they were trained to think just that. They thought they were doing the right thing. But what they did not realize is that over the last ten years, I’ve spoken with and interviewed dozens of prominent doctors on this subject. In fact, I had almost certainly learned more about these medical interventions than they had in medical school.

Don’t believe me? Ask a doctor how much training they’ve had on the science of vaccines. You will be shocked.

After a couple of days of this back and forth, I was starting to get concerned that they would either keep us longer, or worse, call Child Protective Services. While confident we would beat them in court, the ordeal would be a costly nightmare.

Naturally, I didn’t let them out of my sight with our baby. Concern bordered on fear. Finally, after three long days of anxiously waiting for permission to leave, I insisted we had to get back to our other children. They reluctantly processed the paperwork and let us out. Phew! It is beyond sad that doctors and hospitals treat well-informed paying customers—and parents who love their child more than anybody else on the planet—like idiots or worse. It’s an outrage.