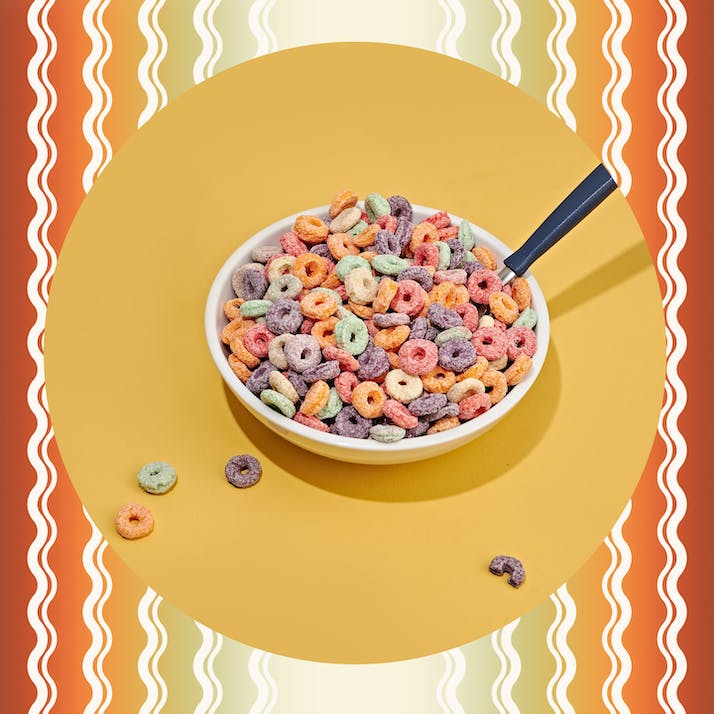 I Love Sugar, but I Can’t Eat It Anymore

Throughout my childhood, I used to inhale boxes of Fruit Loops and Frosted Flakes. Now it seems to all have caught up with my body.

But for those of us who have spent a lifetime spooning gobs of multicolored glucose delivery systems towards vulnerable enamel, the disgustingness is not a disincentive. On the contrary, it’s part of the appeal. The way that Fruity Pebbles turn into a multicolored paste in milk, giving off a scent of chemical sweetness, like a slush of cancerous bees; the sensation of Apple Jacks serrating the roof of your mouth so the sugar enters through a thousand sandpaper incisions rather than through the digestive system; the bland, inedible, cardboard taste of Lucky Charms, which makes each marshmallow a blissful relief; the gaseous aftereffects of Honey Smacks bubbling up for hours, to be swallowed and re-swallowed, so you can linger over the aftertaste of flavored methane.

People boast of the decadent pleasures of various controlled substances; they regale you about altered states and acrobatic sexual encounters. But if you really want to feel the dead-end of 21st-century modernity roiling through your bowels, try eating an entire box of Frosted Flakes in one sitting while staring into Tony the Tiger’s giant, unblinking eyes. It’s…great!

Or something other than great, maybe. But either way, this extremity of consumerism and self-abuse is mostly closed to me now. I look back on it with the wistful nostalgia and involuntary spasms of a nicotine addict.

“”
I look back on it with the wistful nostalgia and involuntary spasms of a nicotine addict.

My Diabetes Feels Like Retribution for Eating Too Much Cereal

I was diagnosed with diabetes about a year ago.

I’ve been responsive to medication—I haven’t needed insulin—and my doctor doesn’t seem to think that I need to make huge changes to my diet as of yet. But still. When you have blood sugar problems, eating three to six bowls of sugar-coated honey bombs with extra frosting is not such a great idea. You don’t have to have a medical degree, or even much functioning gray matter, to know that if you have an earache, you probably shouldn’t stab an icepick in there.

I’m sure some of you are already judging me with your judgy Tony Tiger stare of judgy judgeness. And I judge myself too, though I know I shouldn’t. Poor diet and lack of exercise can increase the risk of diabetes, but my doctor doesn’t think my diet is that poor, and while my exercise has lagged over the years, I’ve never become completely inert. I walk the dog. I ride the exercise bike. I could kick your cardboard cartoon tiger ass, damn it.

Even if the cardboard tiger gets more cardio than me being lifted in and out of the cardboard, blaming someone for their own illness is wrong. People aren’t morally compromised if they get sick, or if they’re overweight, or if they get diabetes. There is no reasonable moral system that assigns you to an afterlife based on blood sugar levels.

But when it’s you, and your body is slowly decaying beneath your softening flesh, it’s hard not to feel like it’s retribution come upon you for iniquity and an egregious sweet tooth. Wouldn’t a virtuous person somewhere along the line have developed the ability to eat only one Vienna Finger, or only two, or only 12, or only enough to make him slightly sick rather than really and truly ready to upchuck wafer bits and cream? Isn’t it a reflection on your character when you eat more than one Jelly Belly at a time so the fabled flavors are overwhelmed in an indistinguishable gelatin sugar belch?

“”
When you have blood sugar problems, eating three to six bowls of sugar-coated honey bombs with extra frosting is not such a great idea.

I Want a Future With Healthier Junk Food

If we’re not talking medical cause and effect, maybe we’re at least talking karma. I’ve tied myself to the wheel with ropes of licorice and sharpened nails of self-indulgence. A more balanced diet, a more balanced life, a few thousand fewer bowls of Crunch Berries, maybe I wouldn’t be looking at two giant Metformin tablets every day, plus the cholesterol pills. The judge at the gate is Toucan Sam, farting rainbows as he dips his bloody beak in your heart.

Sam sees me backsliding I’m sure; I have managed to cut out cereal, but there are still more than occasional candies and cookies. Even as I type, I may be sucking up the last dregs of whipped cream from an overpriced vanilla bean Frappuccino. I try to do it quietly so as not to alert the diabetes, but I can’t help but slurp, and my guess is that it isn’t fooled. Someday in the not too distant future, that vigilant diabetes will cease to compromise with the Metformin, and I’ll have a choice of a life without Frappuccino or a life without—well, life.

Hopefully, I’ll pick the life without Frappuccino, though it does seem like a dry and dreary existence. In the meantime, I could gorge on regrets, if my palette craved bitterness, which, as we’ve established, it mostly doesn’t. Sometimes, I wish for a history of greater continence or at least for more interesting vices. I dream of an obsession with more upscale—more socially acceptable, and maybe even vaguely healthier—junk food. Apple pie has apples in it, at least, unlike Apple Jacks. The strawberries in strawberry pancakes are vaguely recognizable as actual fruit, unlike the strawberry substitute in strawberry Skittles.

Unfortunately, I have a phalanx of food allergies which have confined me to the lumpenproletariat of sweets. When eating eggs makes you vomit and get hives on your head, most breakfasts and most baked goodies are less appealing than all of those formulated sugar products, which cannot trigger food allergies because no food is involved. In theory, I guess I could have responded to my dessert deprivation by embracing healthier options like bananas or walnuts, if I weren’t also allergic to those. In practice, when I couldn’t have cake, I had Krispies. Is it wrong?

I’m of two minds there, like the fabled Crispix made of contrasting sides of corn and rice. Compulsively downing flavored gluten bits while various advertising mascots look on may not be a youthful indiscretion worthy of song and story. But I did enjoy it at the time. If this somewhat disgusting bowl is now to pass from my lips, the least I can do is to admit that I wish it wouldn’t. Age, bodies, will and virtue fail everyone eventually. Shovel in immoderate sweetness while you can. And also milk.