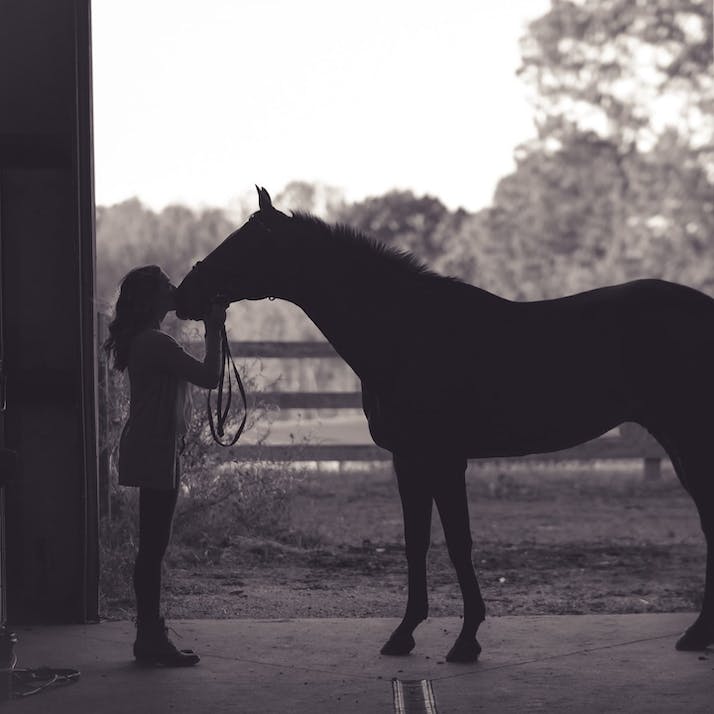 I Love Horses, but the Equestrian World Crushed Me

Solitary stables and metal bits were just a couple of the inhumane traditions I saw horse barns employ.

It started when I was in fifth grade.

It was early summer, and my family and I had gone to a small horse show near our town. It seemed like a fun activity, and I was excited to go. When the show started, I was enraptured instantly. The riders looked like the definition of grace, in harmony with another living being that didn’t even speak their language. I fell in love immediately. Little did I know that there was something rotten behind that flawless facade, something that would become a blight on my conscience and follow me every time I sat on a horse until I'd finally had enough.

“”
The lessons did not go well.

I Entered the Equestrian World With a Radical Perspective

After that day, horseback riding quickly became an obsession. I begged my parents almost daily for riding lessons, but they were prohibitively expensive. With no outlet for my newfound interest, I turned to the internet, where, in the online equestrian community, there is a much larger breadth of opinion about horseback riding. Soon, I started seeing ideas that were considered to be radical.

My YouTube idols were the people taking a stand against stalling (the widespread practice of keeping a horse in a solitary, small room in a barn, supposedly for “safety” and convenience), the use of particularly strong bits (the mouthpiece of a bridle) and the demanding, uncompromising attitude toward horses that is widespread in the sport. Though these online influencers faced heavy abuse for their opinion despite the countless scientific studies they had to back them up, the controversy only attracted me to them more. Because of my participation in this online movement, I entered the actual horse world with a much different perspective than most others. But I didn’t realize that lesson barns would likely disagree with my opinions, and any doubts I had were overridden by my sheer excitement about horses.

Finally, after months of pleading, I convinced my parents to let me enroll in lessons at a local barn. This barn soon proved to be the epitome of the types of places my online heroes would stand firmly against. It had room to turn the horses out into pastures but still kept them in their little boxes. You could frequently see them swinging their heads up and down, pacing and chewing and sucking on the wood (these behaviors are literally called “stall vices”). My trainer was instructive but impatient and didn’t have much sympathy for my inability to put a halter on my horse, especially when he pinned his ears at me, so I recruited the more experienced riders around the barn to help me.

I’ll always remember when a girl forcefully haltered the horse, dragged him out of his stall and gave him a swat on the nose. I watched open-mouthed and, when she noticed my expression, she gave me a hasty, flustered smile. The type of bit that my horse had was aptly called a twisted-wire bit, and it was as disconcerting to look at as its name is to hear. The lessons did not go well—I enjoyed them at first, but my lack of athletic prowess and the intimidating environment left me leaving the barn feeling discouraged and sullen more than anything else. I left after about a year, taking a long break before finding another barn.

The new place was better—the instructor was much kinder and the horses were treated better—but she worked multiple jobs and was often too busy. It eventually fizzled out, and I took another break from the sport.

I Felt Guilty When I Whipped a New Horse

At my third barn, I thought that I had finally found a place where I could ride happily. It was focused on eventing, an equestrian sport that I had always been interested in. The paddocks were small there, just like the first, and the horses were kept inside too much, but at least they were turned out for a few hours on most days. My new trainer was friendly. For the first few months, everything was better. Of course, I saw the problems that I had so loathed at my first barn, but the lessons were going too well for me to care. I had just turned 16, and I progressed quickly.

The trouble came when I got switched to a horse that was more difficult to ride. It was as if he was a robot—he just slogged forward, barely paying attention. One day, I spent almost the entire time trying to get him to trot to no avail. My instructor handed me a whip and encouraged me to use it liberally, urging me to “give him a good smack." I had never laid a hand on an animal in my life, and even as I willed myself to tell her I wasn’t comfortable with it, I felt so exasperated with the horse that I listened to her.

“Trot!” I said to him. Nothing. Smack. Nothing. I clucked with my tongue. Smack. Still nothing. Guilt surged through me anew with every smack of that whip, but my frustration overpowered my conscience, compelling me to obey my instructor. I would later learn that what that animal was experiencing was a psychological phenomenon called "learned helplessness." Knowing that he couldn’t escape the unpleasantness no matter what he did, my mount had simply given up, resigning himself to his fate of endless demands by simply shuffling duly forward.

“”
Guilt surged through me anew with every smack of that whip, but my frustration overpowered my conscience.

The Equestrian World Has Systemic Issues That Need to Be Addressed

That day was a turning point for me. I went home and hid in my room in despair. From that day on, I could no longer ignore my problems with the equestrian world, shove them into the back of my mind or selfishly enjoy the feeling of riding. Throughout each lesson, all I could see was the stall vices, the lesson horses looking miserable, the casualness in my fellow riders’ tones as they called their horses “stupid” and “naughty” and “disrespectful." On social media, I saw people joking about their horses’ stall vices and laughing as they whipped and scolded them. With each post I saw, I felt more shame burning in me, and I even left a few hate comments.

In a diary I kept of my lessons, each entry is filled with only a few words about what I had worked on that day; mostly, they are disjointed, despairing rants. My parents grew sick of the long spiels I would deliver on the way home, and my twin sister commented that I never seemed to be happy after I rode. After significant dithering, I finally texted my instructor that I was quitting, citing a busy school schedule. I felt relieved that I was finally free, but crushed that I could never again experience the freeing feeling of riding—the rhythm of the horse beneath me, the wind in my hair—without feeling guilty.

My experiences have convinced me that this is a systemic problem with the equestrian world, not just a localized thing. I know that the horse world teaches you to disregard not only your conscience but your plain old common sense—the kind that tells you that keeping a roaming herd animal in a tiny solitary confinement cage all day is inhumane and that yanking on a metal bar in an animal’s mouth is uncomfortable. The positive reinforcement movement, spearheaded by dolphin trainers armed with whistles and gallon-buckets of fish in the 1980s and 1990s, had smashed through the ancient barriers of tradition and superstition in the pet training and zoo worlds, becoming the dominant form of training in virtually every field that involved animals in educated countries—except for the equestrian community.

I’m not saying that riders don’t love their horses. Of course, they do. But the culture that surrounds them is so dedicated to tradition that they are never taught the truth. Discrimination, pretentiousness and cheating are things that impact every sport, including equestrianism, but this problem is unique to the equestrian world.

I still love horses, and I always will. Maybe one day I’ll get back in the saddle, but for now, I stand on the sidelines. The thing that frustrates me the most is that non-riders have no idea that this is going on. If we had their support, we could put a stop to the cruelest practices by putting pressure on equestrian sporting bodies. If we band together, we can start making real changes in the sport for the better, but it starts by acknowledging that it is deeply flawed. Only then can we begin to change it for the better.