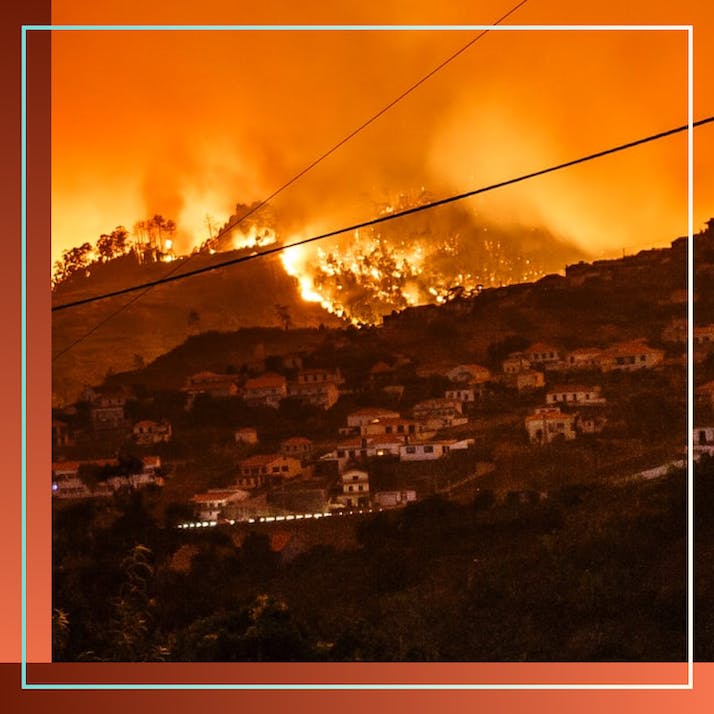 I Lost My Home in a Wildfire

The environmental disaster exposed the kindness of friends and strangers, as well as the avaricious practices of insurance companies.

A Blade of Grass / Millennial / Progressive / Many Hats

The night that we evacuated started like any other night. I had been working on renovating an old house that my partner and I had just bought. I was exhausted and ready to unplug for the night. A windstorm was picking up in the dry September air. The darker it became, the harder it raged. At one point the power went out, so we checked social media to find that a small fire had started several miles away. In this rural area of the Pacific Northwest, blackouts are common and little fires happen several times a year. There was no cause for alarm at the time.

A few hours later, our phones rang out with “Level 3: GO NOW” evacuation alerts. I had enough time to grab our cat, some essentials and a backpack full of clothes before we left. On the way out, after seeing charred maple leaves in the gravel driveway, it hit me that we may not come back to the same place.

With no time to take anything in, we started up the car and drove out. We approached a string of yellow headlights and red taillights slowly drifting down the main highway back into town and merged into the procession. I called some family members who thankfully live in the closest city. They welcomed us in with blankets and shots of Scotch. My partner was rightfully ruminating on the impending destruction of the community that he had called home for almost a decade. I was trying to keep calm, repeating that we didn’t know the extent of the damage yet. Cycling through dismay, disbelief and relief from being in a well-lit home among family, we decided to watch Labyrinth and drink more Scotch. David Bowie finally sang us all to sleep around 4 a.m.

Friends and Strangers Stepped in to Help Us

I woke up the next morning to the sound of my partner crying next to me. He was reading the Facebook group for our rural community. Reports were coming in that the local school had burned down. The highway back home was closed off for dozens of miles, with almost everyone evacuated. Our new, old house and the cabin that we had been renting, which contained most of our belongings, were both located deep in the fire area. That was all the information we could get.

It smelled like a campfire inside the house. Outside, the air was hazardous and smoky, with flakes of ash falling from the sky. That day, we left the valley to get some fresh air.

The next week or two, we split time in hotels and Airbnbs, replacing some basic-necessity items, searching for information on what happened to our home, figuring out what shape our lives were going to take and trying to find some peace. The news of the fires spread quickly. We received an immense surge of support from so many different people in our lives—family members, close friends, old friends who we hadn’t talked to in years. Even random strangers.

People reached out on every possible platform, trying to help in any way they could, offering to donate to help us. We were incredibly grateful, and even a little overwhelmed in responding to them. It was hard to put aside our pride and seek help, but we’re glad we did. That support really helped our morale and our ability to feel somewhat secure in the situation.

We were lucky to be connected to a friend’s relative who had a vacant apartment that she had walled off in part of her house. We would come to know of many other neighbors of ours who lived in hotels, stayed at friends’ houses or camped in fields for far longer.

“”
This disaster has brought out the best and the worst in everyone connected to it.

The Wildfire Taught Us Detachment From Material Objects

About a week into our displacement, we were sent a grainy photo from a crew of first responders that had visited our cabin. A low-lying pile of rubble sat where the cabin used to be. In the driveway, my school bus, which my family and I had converted into an RV, was completely torched. We knew at that point that we had lost our most prized possessions: the sculptures and molds that I had created, including a large, intricate model that had taken two years to make; a cedar-strip canoe that my partner had built and taken out on the river every summer; and all of our old journals, heirlooms and ephemera that we had saved for our entire lives.

Thus began a process of detachment from objects. We had been fearing this and gradually began to reckon with it over the course of our displacement. Still, it stung, and hard.

Much of my identity was wrapped up in my artwork. I could not escape the idea that all of that time I had put in for the last two years had gone to waste, as well as all the time I had spent on other art that I completed and kept. I mourn the art that was given to me by my friends, which carried a little part of them for me, and which I cannot replace. This regret has diminished over time, but it has by no means gone away in the months since the fire. But I try to focus on the facts. I have gained skills from those years of practice, and I still have those relationships, even if the objects produced from them no longer exist.

As for the non-sentimental items, losing them has been more like an innumerable series of small disappointments and inconveniences. It’s annoying to realize a dozen times a day that you don’t have some little thing that you used to, like a tea kettle or a nightshirt. In time, I have stopped feeling those disappointments almost entirely and have just gotten used to it. We are fortunate that we have the means to replace them.

Those means are a matter of privilege. We have the advantage of a supportive community. We had the outlandish luck of having bought a house less than two months before the fire—insurance has allowed us some compensation for what we lost. We have stayed afloat on the grace of the resources available to us.

If this fire had happened two months earlier, we would have been in the same situation as hundreds of other people in our community, and many thousands in the American West, who don’t have that protection. There are families, often living in trailers or rental homes, who either couldn’t afford insurance or were gravely underinsured, and lost everything. We have worked to help them out as well by giving them a large portion of the donations that we have received and by encouraging others to donate to organizations that help them directly, such as the American Red Cross and local community-action movements.

Insurance Companies and Thieves Attempted to Take More From Us

This disaster has brought out the best and the worst in everyone connected to it. Right after the fire, as roads were opening up, there was a rash of break-ins that occurred due to thieves taking advantage of residents’ extended absence. Folks watched out for each other and stepped up to guard other properties against suspicious cars making their rounds and lurking in driveways.

There have been numerous incidents in which some poor jerk lost their pre-1980s home and either couldn’t or didn’t want to pay thousands of dollars for asbestos removal, so they loaded up the remains of their home into a trailer and dumped it into others’ yards. Neighbors have been coming together over Facebook to try and ferret out the dumpers responsible.

We have also witnessed the tactics that insurance adjusters use to avoid paying out due coverage. Our own adjuster immediately tried to deny us coverage, arguing that our property had been seized or destroyed by a civil authority, not because our house was uninhabitable due to a disaster. This was obviously untrue. He tried to enter assertions onto the record about our situation that were false, and which contradicted our reports and evidence. If we hadn’t read his arguments and our contract carefully, we could have easily let him screw us out of our coverage.

While being honest with them, we have had to be careful not to say anything that they could possibly misconstrue and weaponize against us. Truth be told, I’m nervous even talking about it for an anonymous article. I can only imagine that this must happen to plenty of people all the time. If you don’t understand a contract, get legal help. It’s worth it to not take these companies’ word for granted. Their profit motive is in line with not fulfilling their obligations.

“”
The most important thing to take away from this experience is that stories like mine are becoming increasingly common.

Wildfires Will Continue to Ravage The Land Unless We Take Action

Our community is still scarred, but we are rebuilding. Logging crews and utility companies have been working long days to remove dead trees, control potential landslides, and rebuild downed networks. These days, we are witnessing crews of 50 or more volunteers helping with clean-up. Neighboring towns have donated tons of clothing and home goods that have gone to good use. Church organizations, and the local school that hadn’t burned down, have opened their doors to distribute donations to the people who need them. As my partner and I rebuild, we are leaning heavily into fire safety on our own property, because it could happen again, even more easily now that our forest is full of dead trees.

The most important thing to take away from this experience is that stories like mine are becoming increasingly common. Our global climate is warming at an increasing rate. According to NASA, atmospheric CO2 has jumped up dramatically since 1950—about 37 percent higher than the previous largest concentrations of the past 800,000 years. Global temperature, which used to fluctuate up and down before 1940, has been steadily increasing since the 1960s in a way that is not consistent with natural behavior. We are now really starting to see the effects: according to data from the NIFC, the area burned by wildfires in the U.S. has steadily increased since 1983, when reliable estimates based on federal and state reporting became available.

We have the technology to change this. We need to wean off our dependence on fossil fuels and transition to clean energy. This is a problem that runs deep in our transportation, production and farming infrastructures, and businesses need to be brought to task in taking their own responsibility for part of it. We all need to work together in our own societies and get our representatives to help this happen. We can volunteer and vote for those who take this as a priority, and we can limit our own carbon footprints by driving as little as possible and sourcing our goods as locally as possible. We can stop this cycle from burning us alive, but we need to deal with it urgently if we hope to reverse it.