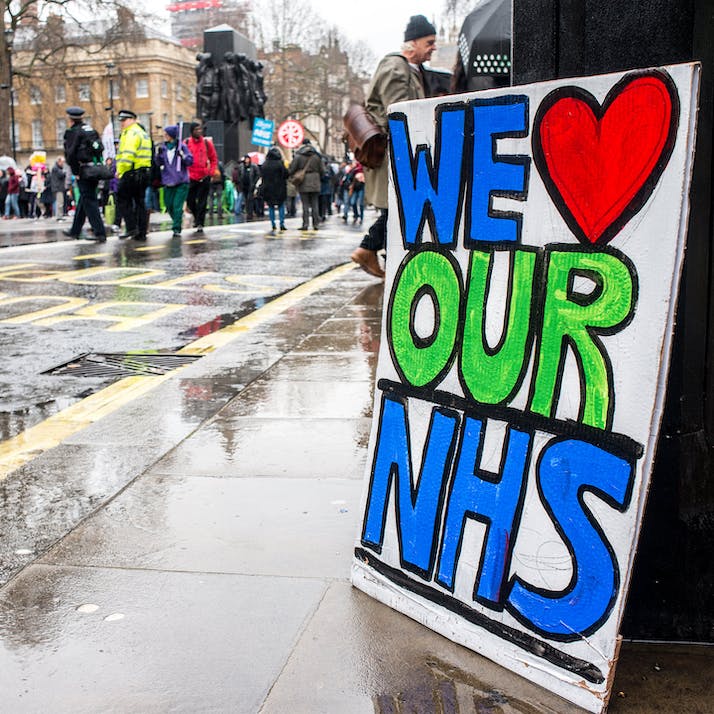 Part One: A Cancer Diagnosis Changed My Relationship With National Healthcare

The NHS reflects the best side of UK society, but it’s crumbling

According to the charity Cancer Research UK, there’s an average of 13,300 cases of kidney cancer each year here. Of these, the death rate is around 48 percent, which means that when diagnosed as early as possible and caught before it spreads, this insidious, malignant, silent and ruthless killer is survivable. But 50/50 odds only seem generous until it comes to facing one’s own mortality. Then it becomes, “Fuck me, I could die here!”

My initial reaction to my cancer diagnosis was shock. Later on, a kind of anger-meets-fear kicked in. But it wasn’t the cancer that got my goat up.

“”
My fear—and the point of recounting this battle with cancer—is that the NHS has already been eviscerated.

Kidney Cancer Caught Me by Surprise

The story starts when I was called to an appointment at the local hospital’s urology department after a scan of my thorax for a separate health issue. The news was delivered to me by a cheery medic from the urology department. “Mr. Gun, the findings on the last scans taken indicate a malignant mass in your right kidney. In all likelihood you have renal cancer.” My response was a stunned but calm silence.

The first utterance I managed was, “Ah…I wasn’t expecting that, but what’s the score then?”

In a still quite annoyingly chipper voice, she said. “Let me go and have a quick chat with my boss,” the consultant who up to this point I had never laid eyes on. The medic was back in five minutes to inform me that if I had my right kidney removed, I would probably be fine, as long as the other one is up to the job. In a rush, I was given a leaflet, a booklet, introduced to a “specialist” nurse, given her card and told to call for any support I might need.  I sat and waited for well over an hour beyond the appointed time, and once the news had been delivered to me, I really did feel bundled out of the department. Over the next couple of weeks, I left multiple messages with the nurse and never heard from or saw her again.  I was advised to seek support from a separate nursing group that specializes in supporting folks with cancer. They sent me the same leaflet I’d been given during my initial appointment. I had never experienced such poor interactions or service delivery in any previous interactions with an NHS hospital—never.

I accept that in the UK we are in a unique situation: Most of us have been born into a system where healthcare is part of the social contract between state and citizen. The NHS welcomes us into the world and sees us off at the end of life. My fear—and the point of recounting this battle with cancer—is that the NHS has already been eviscerated. By the time it’s sold off it will just be a corpse. The UK is about 5,000 doctors short of what the General Medical Council recommends, and 20,000 short of nurses. Compounding the staff shortages with increasingly pointless paperwork, and we see the start of a perfect storm.

I Gave Up on the NHS and Sought Private Care

I spent hours on the phone, mostly on hold, trying to get further information about my diagnosis and how treatment needed to proceed. Remember, I was told at my first appointment that I would need my right kidney removed. My anxiety turned to anger and then morphed into fear. Months went by and there was no consistent communication with any of the parties involved.

Communication was poor between both my GP doctor and the hospital departments. It is supposed to work like this: I get referred to the hospital for a scan, the appropriate department analyses the scan, then the results are forwarded to my GP to add to my lifelong medical file and, if the system is firing on all cylinders, the patient, receives a copy of what was sent from the hospital to my GP. The hospital-based consultant makes his diagnosis and then books me in for whatever procedure or treatment is deemed necessary. If this actually happened, my god, things would be so much easier for all concerned.

As fear started to get more of a grip and I started being asked questions by my daughter that I simply could not answer, I decided to look into getting a private second opinion and having the surgery also done privately.

You could be forgiven for thinking that an already stretched NHS would help facilitate this decision, but sadly, that was not the case. It took several months of even more phone calls, emails, letters and finally the intervention of my MP to get hold of my own medical records so that the private doctor could take a look and consider his opinion.

I feel almost ashamed to say that I fought to access private treatment, but that seems to be the insane situation many are now finding themselves in in the UK. Unfortunately, this should not come as any surprise.

The plans to degrade and then sell off the NHS are well documented. Jeremy Hunt, Iain Duncan Smith and others have written extensively of the need to open up the NHS to competition. However, for anyone who would like to understand a little more about why I found my personal experience so deleterious, and how it resonates with a long term ambition of neoliberal politicians in the UK and beyond, take a peek at the well-titled “How to Dismantle the NHS in 10 Easy Steps” by doctor and neuroscientist Youseff El-Ginghy. It is an excellent work that distills all the arguments for what amounts to a crime against the British population.

“”
Free healthcare at the point of access is the jewel in the crown of British democracy.

Free Healthcare Is Our Birthright

Free healthcare at the point of access is the jewel in the crown of British democracy and, as many have argued, including the eminent economist Yanis Varoufakis, a vital component in the economic functioning of the UK. As I confess, I found myself needing to buy some of my treatment from a private service simply because my local NHS hospital has reached a crisis point, the likes of which neither staff nor patients I discussed this with have seen. Of course, the COVID epidemic hasn’t helped matters, but when billions were spent on a track and trace system that never worked and hundreds of millions were misspent on PPE that proved useless, the argument that the NHS is too expensive is rather threadbare. This is one issue that the British public really do need to pay attention to—not my kidney, but the prognosis for the NHS.

My feelings for the NHS remain solidly supportive and I’m grateful that it was an NHS hospital that found the tumor that may well have terminated my time here on earth. I went private and did get an excellent level of care—the surgery went well but on discharge from the private clinic I was, in a sense, on my own again. The aftercare, staple-pulling and follow-up treatments have all been courtesy of the NHS.

There’s nothing like an existential threat to grab my attention, and in successfully dealing with that threat I have come to value—treasure, even—the National Health Service in a way I never fully appreciated before. If time and tide allow, I will be getting involved in any and all protests that seek to secure what to many Brits is something akin to a birthright. I’ve worked in the NHS, my mum was a nurse, my grandma was a matron and my grandfather was a surgeon.

The NHS was never designed to replicate any business model, it was designed to ensure that all UK citizens were able to access healthcare. Class and socioeconomic status were irrelevant. Much like the Constitution of the U.S. is a desirable and defining expression of what it is to be an American citizen, so the NHS, to me and many others, is a desirable expression of our nationhood.

Neoliberal promise of trickle-down economics have not panned out, and as my kidney is now off for testing in an NHS lab for any further signs of risk, I can honestly say while I feel grateful to the surgical team that saved my life, I’m left with a sense of regret—regret that the NHS has now been so starved of staff and resources that I felt no choice other than to pay privately. First world problems for sure, but across the board, health outcomes in the UK are heading south.