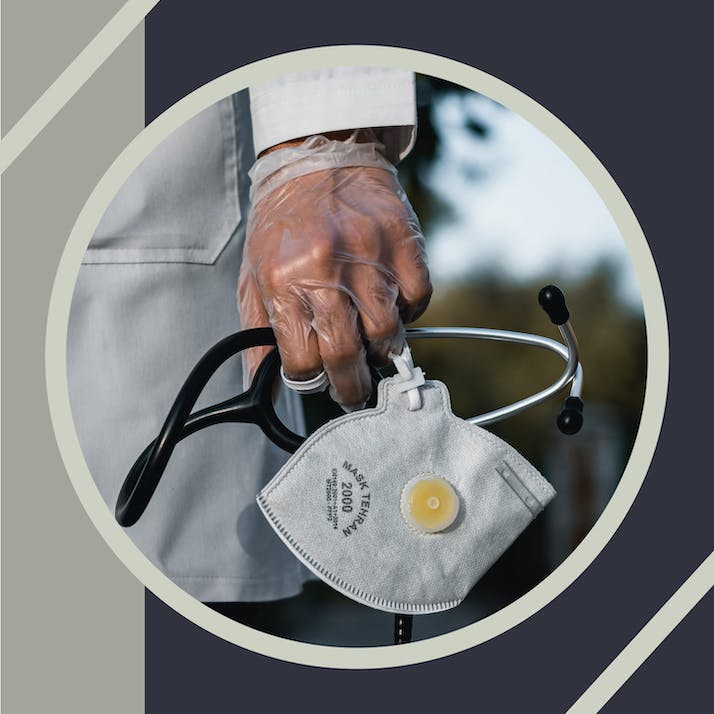 I'm Living With a Frontline Healthcare Worker During COVID-19

For one family, the bravery of healthcare workers in the midst of the coronavirus outbreak hit home.

My husband is not the same man I married.

I married a dentist, expecting a care-free life with fixed office hours and a stable income. After immigrating and settling in America, he had to start over because his degrees weren’t accepted here. Opting to remain in healthcare, he chose nursing. It was a hard decision to switch careers, but looking back, I’m really glad he did. We planned to buy a house and finally get settled down. He had only worked about a year before the hospitals began to get flooded with COVID-19 patients. It became the collective pulse of the entire nation. But just like everyone else, we thought these kinds of things don’t happen to people like us.

Boy, were we wrong.

I’ll never forget that early Saturday morning when he called me on his drive home from a particularly grueling overnight shift. He made me an offer I easily refused: take our two kids and move in with my parents. My husband had taken care of a particularly sick patient the night before, who ended up passing away during the night. I declined his offer, opting to stay with him and be optimistic about the entire situation. However, unbeknownst to me, the virus was already making its way toward the home we loved and the two girls we were raising together. The days passed like normal and my husband worked a few more night shifts. We felt a sense of serenity since he was taking all the necessary precautions, both at home and at work. Little did we know that the world as we knew it was about to be turned upside down.

A few nights later, after having spent the evening playing with the kids, my husband was lying next to me in bed when he complained of chills. He had a fever. I quickly grabbed a few of my personal items and moved into the bedroom that my daughters share to bunk with my youngest. As we lay in the grips of sleep, we prayed that it wasn’t what we each thought it could be. I did my best to pacify them, telling them that it was probably nothing and Daddy would be all better by morning. He was just tired from working a few back-to-back shifts. But I couldn’t help but think deep down inside that it had to be something more—that the very thing which we tried to keep outside our home had finally made its way in.

The kids slept soundly and I lay awake in fear, often getting up during the night to listen at the door to make sure my husband was still breathing. I always hated his snoring, but honestly, hearing it now gave me a sense of relief. The next day we communicated through text and FaceTime between rooms. Two days later, the now-infamous nasal swab test came back positive and we were all crushed with the news. I remember feeling this overwhelming rush of fear and hopelessness that I had never experienced before.

“”
Two days later, the now-infamous nasal swab test came back positive and we were all crushed with the news.

In March, Frontline Workers in Healthcare Were Constantly Risking Their Lives

Context is everything. I have to remind you that this all happened toward the end of March, and, as the world recalls, anytime you flipped on the news, reports of anywhere from 700 to 1,000 people who lost their lives (a day) to this merciless virus—this silent killer—flashed across screens. The harrowing images of giant freezer trucks and overflowing body bags on the streets of New York were still fresh on my mind. The world was shocked to its core. I couldn’t help but wonder: Would my husband be next?  My children are only 12 and 13, yet old enough to connect all the dots. After we learned that he tested positive, they looked at me wide-eyed asking what would happen to them if I got sick, too. I could see genuine fear in their eyes and I knew the lines in my forehead betrayed my weak words of assurance. It all seemed inevitable.

So we started making plans. Sometimes, when my husband was awake, we exchanged texts or whispered through tightly closed doors, making roughly laid plans for our children’s future. “Be patient with them and make sure they push themselves to succeed in school and in college,” he said. “Make sure you marry again,” he would then insist to me. My husband was weak and his entire body hurt, but he wrote down his passcodes and usernames and told me where to find any documents I may need if something were to happen to him. I didn’t argue with him this time, and it almost felt foolish to remain optimistic. I felt like I was his nurse now, bringing him food and medicine, but never entering his room. I sent him videos about breathing exercises and encouraged him to do them hourly. We held our breath until the day his symptoms started decreasing and eventually disappeared altogether.

We Got Lucky; but It Was Still Just the Beginning for Us

Thankfully, his case was mild and nothing like what we anticipated. Even more surprising was that the kids and I, despite living in close quarters, never developed any symptoms. Within two weeks, he had fully recovered, but we continued wearing masks around the house. Slowly, our happiness began to be overshadowed by the endless calls my husband would receive from the short-staffed hospital to return to work and pick up extra shifts. There’s no way we can send him back to Ground Zero, I thought.

Months earlier, by a strange coincidence, he was scheduled to start a new nursing position at the hospital, which eventually became the epicenter of the outbreak in our state. We feared sending him back there, especially after feeling we had narrowly escaped. What’s to stop it from spreading throughout our family if he starts working there?  My husband decided to push on and accept the new job even though it was not the position for which he was hired. Our fears were realized when he was sent to the COVID-19 floor. It was essentially a large open space, converted into a makeshift ICU unit and populated by ventilators, aiding patients who couldn’t breathe on their own. Healthcare workers tried to keep their heads above water as the positive cases and admissions increased exponentially. Desperation hung low in the air and everyone could feel it.

Work was excruciatingly hard, but the worry we experienced over those weeks was even worse. After all, you can’t underestimate the power of fear. The next struggle was how to survive in the same living environment. My husband insisted on eating with paper plates and plastic utensils, and avoided touching metal surfaces. We continued wearing masks at home and sanitizing all surfaces. My kids weren’t even able to hug their father for the longest time. He continued to plow through each day, brushing aside my worries, and insisting he was immune because his body may have developed resistance to the virus. However, we had both heard that there were mutations and plenty of cases in which people contracted the virus a second time.

Feeling bad for having kicked me out of the bedroom, my husband decided he would sleep on an old futon that we had borrowed. Although it was uncomfortable—and even harder to stay away from the family he loves—he was determined to isolate himself. He continued to self-quarantine at home out of fear of carrying the virus from work and infecting either myself or our two young girls, one of whom suffers from asthma.

“”
Like many Americans, it was a tough few months and quite easily the darkest time in our lives

This Experience Has Made Me Even More Grateful to Frontline Workers

Like many Americans, it was a tough few months, and quite easily the darkest time in our lives. As the months passed, however, my husband began to share more and more heart-warming stories of patients who recovered. Without realizing it, I began to allow myself to hope once again. In the middle of this pandemic, our nation saluted first responders, who were the ones fighting our battle on the front lines. I couldn’t have been more proud of my husband, who I felt was like our personal soldier. I realized how lucky we truly were.

They say everything happens for a reason. Sometimes, we just need a jolt to wake us up from going through the motions of life. As our world came crashing down, it allowed us to see what actually held it up and prevented the ceiling from caving in around us.  Unless you know medical professionals who work directly with sick patients—and even become sick themselves—it’s hard to understand the impact on their family. My husband made a huge sacrifice for our family, as well as those patients he helped treat. We know how difficult this was for him, and for all healthcare workers. Without a doubt, these experiences have changed our outlook on life and strengthened our family bond, For that, we will always be grateful.