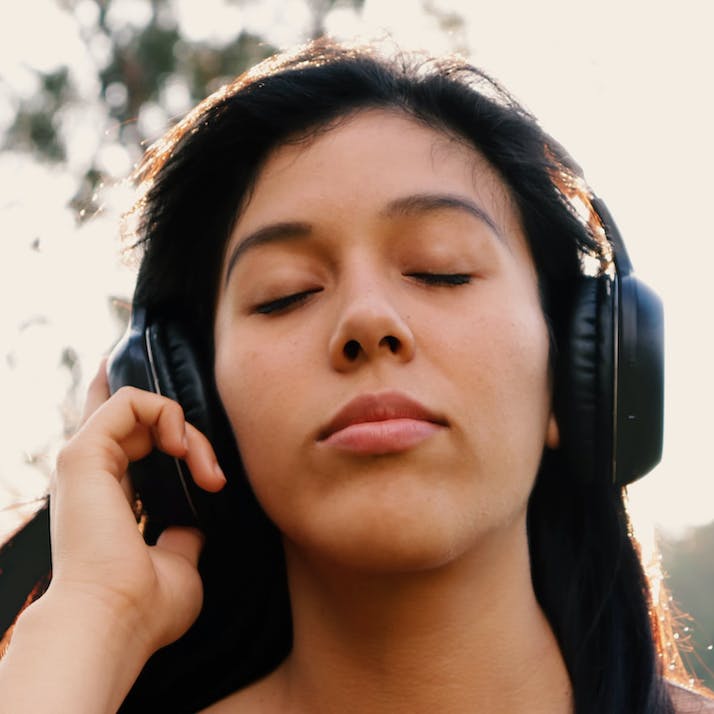 What It's Like to Listen to Music With Synesthesia

Until recently, I thought everyone envisioned patterns and places when they heard songs.

“So you don’t ‘see’ anything when you listen to music?”

The end of a conversation with my partner made me realize that my brain does not entirely work the same way everyone else’s does.

“”
These songs have no association with me being in those places; they simply just pop up in my head when they play.

Following that day, I thought about that conversation a lot and eventually scheduled an appointment with a licensed psychologist able to diagnose neurodiversity. Among other things, one word that came up in regard to how my brain works was “synesthesia.” Synesthesia is when a person blends together senses, resulting in the experience of different senses from one input. A form of synesthesia that people can easily understand is when numbers “have” colors. One with that form of synesthesia will look at any number and that number will have its own respective color on a consistent basis. Now, synesthesia isn’t currently clinically diagnosed, but they are able to perform tests that can determine if any crossings between senses are present (i.e. synesthesia). We worked through them together, and sure enough, it appeared that my brain did indeed like to take little detours through different senses.

What has this meant for me? Well, the same concept as described previously applies to me, but instead of numbers and colors, I “see” places and patterns with music. Now, I put see in quotes because one thing I want to convey is that I do not see these places or patterns with my eyes. The way I see it is the same way you would envision the city of Paris if I mentioned the name or any monument within it. When I listen to music, an intense envisioning of these places or patterns happens within my mind, and it has been that way my whole life.

It is estimated that roughly two to four percent of the population are synesthetes, so naturally, there are more people asking questions than there are those answering. When I am asked about my synesthesia, I always try to give examples and answer as much as I can to give the person an idea of what it is like. For my first example here, the song “Brandy (You’re a Fine Girl)” by Looking Glass: This song doesn’t trigger my pattern synesthesia but it does my place synesthesia (which is by far more active). This song in particular makes me see a street in the evening a bit distant from Downtown Los Angeles. As I said, my pattern synesthesia is much less common compared to my place synesthesia, meaning that I won’t see it as often when listening to music. For this example, the song “Your Love (Deja Vu)” by Glass Animals makes a sort of slow swirling pattern akin to the pattern a kitchen mixer makes when mixing ingredients on a low setting.

I am often asked about the places I see when my synesthesia is triggered. Things such as: Are they real places? Have I visited the places I see? Have I ever seen a place that was not real or one I have not seen before in person (so maybe online)? For the most part, I see places that I have actually been to before, and that includes brief visits (think simply driving by on a freeway). So yes, the places are certainly real.

Throughout my entire life, I can only think of one or two times when a song’s place was somewhere I didn’t recognize I had actually been to or seen. Regarding how these places are chosen by my brain, it seems to be random. These songs have no association with me being in those places; they simply just pop up in my head when they play. They typically aren’t “major” places either. In fact, the places I see can be pretty random and obscure locations. One that often makes me laugh is a song whose place was a very random part of a nearby freeway at night. I am not often asked about the patterns I see, simply because that is a concept that is easier for non-synesthetes to understand (like the colors and numbers example).

“”
I find it crazy that people can listen to music and not see anything!

I Can't Imagine My Life Without Synesthesia

With synesthesia being so uncommon, I can get pretty interesting and weird questions about what it’s like living with it. One memorable question was whether or not I can control it, like being able to turn it off if it becomes too distracting. Simply put, no, I cannot turn it off. Can it get a bit distracting? Certainly, but in those cases, I will listen to non-music audio (typically rain or white noise) to “quiet down” for a bit. There is good news though: Since I have lived with it my entire life, I don’t find it intrusive at all. In fact, I find it crazy that people can listen to music and not see anything!

Another interesting question I have been asked is about how my synesthesia reacts to things like soundtracks, where the music might already have a place because of its medium (movies, video games, etc.). In this case, any real-life association with the song I might make will actually overwrite my synesthesia until I can break the real association (I do this by listening to it outside of its original medium). In the case of a movie, after I break the association with the movie’s events, I am able to see the song’s “real” place according to my synesthesia. An exception to this would be if the soundtrack is much more overpowering (so maybe I’m not really interested in or watching the movie). In that case, it is business as usual and I am able to see the song’s place as any other song. Lastly, I have been asked about any times when a song didn’t trigger my synesthesia, and in fact, there have been a couple of times when I saw nothing! It’s extremely rare for me not to experience anything, but it has happened. Those very, very few times in all of my years knowing nothing but synesthesia have been my only glimpse of what it is like to “normally” listen to music.

While synesthesia is certainly unique, I have known nothing but its impact on my music experience my whole life. It very occasionally can have its drawbacks, but I couldn’t imagine living without it. When I learned that my experiences were not the norm, it sort of opened my eyes as to how differently every single person on this planet can perceive the world. As a result, I’ve always tried to be understanding of others even when something might seem normal or easy to me because, in reality, there is no normal or easy. Everyone will always base those concepts relative to themselves and what they have experienced. Never forget to accept and treat everyone kindly because, as you have read here, despite the fact that my experiences are shared by very few others on this planet, to me: You’re the weird one.