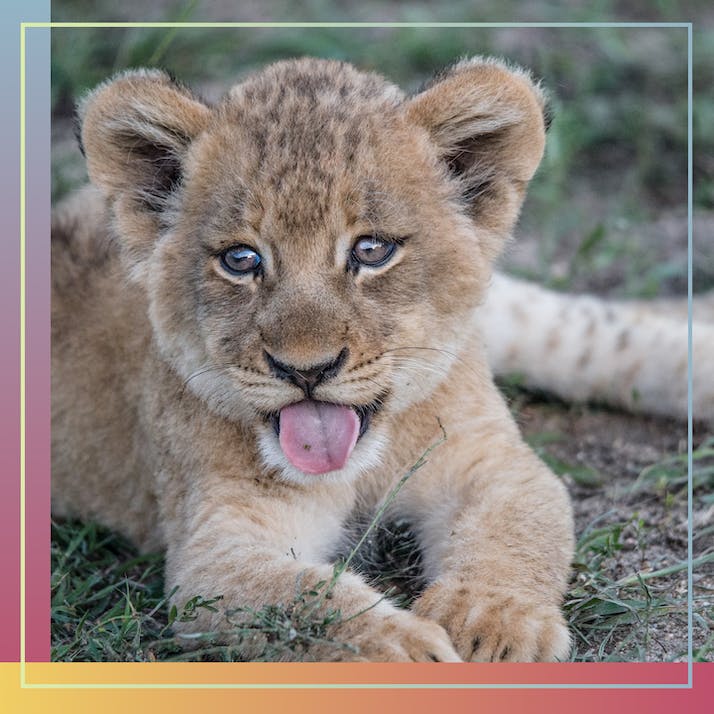 Leaving her desk job and the single life behind in London, the author explains that she'd never grown more.

My dream was, I admit, a cliché. I was living in London, hoping to meet the love of my life, have perfect children, and move to the ideal home—all while advancing my career. But, surprise: Life wasn't going that way at all. I was stuck in an unfathomable rut of singleness. I felt a darkness in my days. So I shook the snow globe of life and booked a trip to Zimbabwe to look after big cats.

Traveling solo to look after cubs in a breeding program felt like a way to find myself, and spend time with the animals I admired more than any other. My obsession with lions began when I was a child. I imagine it had something to do with my favorite book, The Lion, the Witch and the Wardrobe. Online I stumbled across the opportunity to work alongside lions in Africa. The project aimed to increase the lion population, allowing Africa to preserve one of its affirming identities. I knew immediately I had to go. My world needed change, and for some reason, I decided a trip would fix everything that felt wrong in my life—an enormous amount of pressure to put on an adventure, I realize now.

My boss gave me a three-month unpaid sabbatical. When I told my family, they congratulated me with rapturous cheers for a once-in-a-lifetime opportunity. But once I specified that I’d be heading to Zimbabwe, everyone tried to talk me out of the idea. They bombarded me with stories of a dangerous country, rife with political corruption, poverty and rampant inflation.

We all knew that I would go ahead. Stubbornness has always come easily to me. For the first time in forever, I allowed my heart, rather than my head, to steer me. If my desperation for escape surpassed my desire for the cause, I admitted it to no one.

I was, in truth, running away. The online dating disasters, the binge drinking blackouts and the Sundays spent crying in my lonely home were twisting me into a mental space that scared me. I knew, deep down, that I had to make a change, no matter how small or inconsequential. Little did I know that my selfishness would be no match for the lives I encountered in Zimbabwe.

“”
Chopping up zebra carcasses and delivering slabs of meat to the cubs was pungent, exhausting, sometimes nauseating labor.

I Needed a Shock to the System, and I Definitely Got One

For eight weeks my home was the town of Victoria Falls, or Mosi-oa-Tunya ("the smoke which thunders"). My accommodation was a spartan lodge: no television, no internet, no pristine coffee machine—farewell, mod cons. As I hesitantly greeted minimalist living, I was lucky at least to get a bedroom to myself. The volunteers scheduled to share had canceled, out of fear of living in Zimbabwe.

That first night, curled up under a patchy mosquito net, I felt a deep, aching loneliness. But I wasn't prepared to quit. I’d committed fiercely to the program, and I refused to let myself turn back. Admittedly, part of that was ego: I couldn’t face going home with my dream dashed.

Little did I know then how many shocks to the system awaited. The volunteer role was a six-days-a-week grind for a city girl accustomed to wine bars, a shiny office and a regular pay packet. Each morning began at six. My uniform consisted of a khaki t-shirt, clumpy boots and a cosmetics-free face. The two other volunteers and I left the lodge in an old bus that stopped to collect workers en route to the lion project base about three kilometers away. The rustic, non-air-conditioned rides, bustling with jovial lion handlers and surrounded with expanses of wildlife-laden bush were the best commutes of my life.

My job on the lion rehabilitation project was to feed, walk and monitor four cubs. Once they reached 18 months old, cubs are considered too dangerous for human contact and get transferred to the project's head office in central Zimbabwe. Every day I walked with the lions and recorded their behavior and development. On the lion walks, guides taught us about safety and offered titbits about lion behavior.

In the breeding program, the cubs relied on us to provide their meals. Chopping up zebra carcasses and delivering slabs of meat to the cubs was pungent, exhausting, sometimes nauseating labor. Hacking a machete into a zebra leg was a far cry from typing at my desk. London, with its fake promises, felt a long way away and began to fade into my old life. I learned to complete my tasks without fuss. Each of my arduous days caring for lions was an honor.

We volunteers also supported the local community. Once a week, I spent a day in a school. Its austerity was heartbreaking. The pupils’ poverty was apparent, and initially, my paltry input of playing soccer with them or helping them to read felt inadequate. But the kids’ hugs and smiles warmed me more than any aspect of the life I left behind in London.

Before I departed Victoria Falls, I visited some of the children's families. I had little but hand-me-downs to offer as gifts. I left a pair of battered shoes to one child, t-shirts to another and a bag of pens to someone else. Their gratitude left me in tears. As I say this now, I don’t want to imply I was some sort of savior. Far from it. Rather, it was a humbling experience if ever there was one.

The Changes That Eight Weeks Made Still Guide My Everyday Life

Before I left for Zimbabwe I focused on the reasons I was unhappy. I didn’t realize then that the trip would stir a positivity that has remained, and ultimately which has changed my life. As an office worker used to squandering my salary on clothes and material goods, those eight weeks were a lesson: Spend less. Appreciate what you have.

When I returned home and resumed my life, I did so with a renewed vigor and an understanding of my profound privilege. I experienced more gratitude in my everyday life. I learned how to live each day instead of wishing for change. And the memories of time with those lions and schoolchildren still makes me grin.

As cringeworthy as it sounds, the people and animals I spent those eight weeks with gave me more than any paycheck could offer. Before Zimbabwe, my life was focused on the next night out, on doing only what suited me. Giving back? It wasn't a concept I practiced. Words fail now to explain the pleasure of joining the family of big cats, handlers and children. It was a fleeting time, one I may never get to repeat. Thankfully, the memories don't fade.