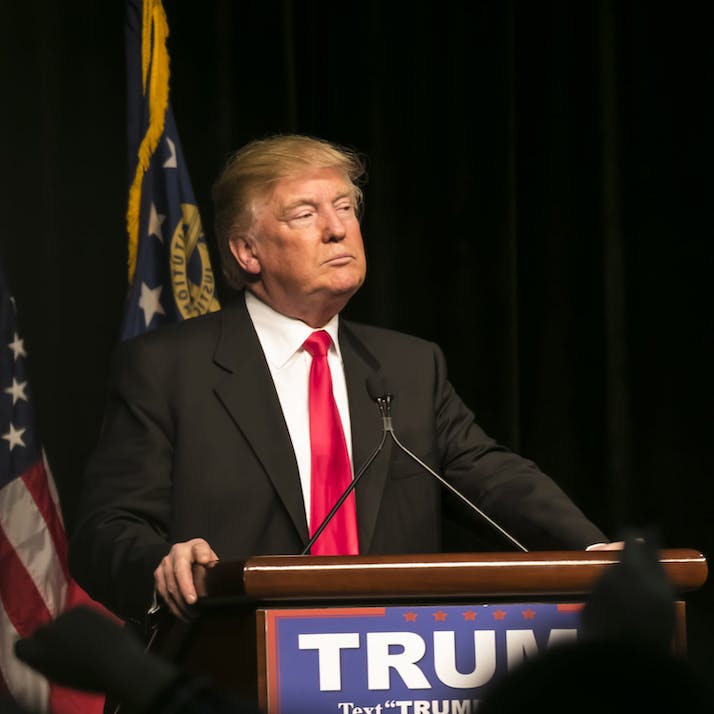 The Left’s Intolerance Has Solidified My Support for Trump

Once he came forward about his ethnicity, the author learned his liberal friends’ true feelings.

I wandered the college library, hopelessly trying to occupy my time before my next class. My mind was racing through every plausible scenario in which my life could possibly change. I didn't want to hide my heritage any longer, to keep pretending to be something I wasn’t.

Ever since second grade, I've had people question the validity of my "whiteness." I’ve been outright called a liar. I can thank my one white grandpa that my mom was able to classify me as white—it seemed the appropriate term for a while. Until I was six, my hair was white-blonde, and my skin practically ivory. But as I got older, I became darker, and my features became more "ethnic" like my grandmother. I currently have hair like burnt lumber, slanted, amber-colored eyes, a sharp visage and deep olive skin. Because of the season, my complexion isn't as vibrant as it typically is.

I'd been encumbered with deciding how to tell the truth for over a year, and I finally felt it was time. My experiences brought me into conservatism and led me to support Donald Trump in 2016.  People shouldn't be scared to be open about their race or ethnicity, and under President Trump, I've no longer felt abashed.

Thoughts swirled around my head—I no longer saw bookshelves, just words racing around, and images of a hopeful future began to appear along with them. Suddenly, I was snapped back; my mind no longer lingered with myriad introspections. My eyes refocused, and I saw my friend Ronnie grinning ear to ear. Her ring felt like it was still embedded in my shoulder, where she had punched.

"There's my favorite Trump supporter!" she remarked with an exceptionally pronounced eye roll.

Although we had different political views, nothing seemed to stop our friendship. We frequently confabulated on a variety of topics, including politics, and our thoughts never had caused either of us to want to distance or outright end our friendship. We were never found pettifogging and always maintained civility.

We moved to a more private expanse of the library so we could talk without being repeatedly hushed. We discussed her new classes, her desire to become a preschool teacher for children with autism, the latest saga in her parents' alleged divorce and her breakup with her latest boyfriend. "What's new with you?" she finally asked.

I spilled everything, laying my heart out. I explained how I had been keeping my heritage a secret. My family's past experiences had created fear in the youngest generation, but I was ready to be open and even embrace my culture publicly. She seemed bewildered but intrigued.

"Well, what are you then?" she exclaimed. My heart raced. I don't know why, but my mouth became sandpaper. I could feel my temperature rising, flushing my face and reddening my ears. I realized I had never said it out loud, not even in my house. I collected myself and replied, "I'm Romani."

"Oh, that's a cool name,” she quickly responded. “It sounds Italian. Is it a tribe somewhere?"

"No, it's a South Asian group," I said. I felt awkward, yet excited. My heart continued to race, but I started to sit taller and talked with a confident smile.

“”
I support Trump for his policies. He sees me as an American first. He doesn’t see me as separate or unequal because of my heritage.

The tension I had felt earlier was melting away—if anyone could make this conversation fun, it was Ronnie. "Hmm, I don't think I've heard of that," she shifted in her chair, suddenly seeming different. She looked up, her eyes pointed directly at mine, and without a beat, continued, "Is there another name that I might recognize?"

That sentence chilled me to the core. I felt sick, but I reminded myself of who was in front of me. Ronnie was someone I had talked to for years about such controversial topics that this should have been nothing in comparison. I took a deep breath and responded.

“Well, I don't like this term; in fact, my mom hates it when my uncle uses it. However, there is a term that you would recognize, and it's…," I took another breath. "Gypsy."

Complete deafening silence followed, and I could hear my blood flow. "It's not an occupation or a costume; it's actually a race and ethnicity. My whole family is,” I frantically added. I was immediately cut off—not by her voice but by the way she stood out of her chair glaring down at me. She became capricious, raised her hand and slammed her twisted fists onto the table, sending a steady shockwave to the ends of the room. Her face became clenched and sour.

“That's fucking disgusting," she yelled. My heart dropped and fell out of my being. I was paralyzed, seemingly trapped in an emotional chrysalis. She looked as if she had a terrible taste in her mouth that needed to be spat out. "You're a fucking Gyppo cunt, you should be ashamed, you should feel wrong, not for hiding your fucking greedy, lying, dirty heritage but pretending to be a decent fucking person,” she continued. “You should have just kept up your white facade. I can't be your fucking friend anymore. I feel disgusting. I should have known—of course, a Gypsy would be a fucking Trump supporter."

She stormed away. Out of all the scenarios, I had never expected her to bedevil me. I didn’t remember the length of time that went by. It could have been hours or minutes. Without realizing it, I had walked to my car and gotten inside. I skipped class and simply tried to process what happened.

Since that experience in 2019, I have decided to move past it and claim my culture. As an artist, I’ve created dozens of paintings about Romani experiences. I have joined groups that advocate for the desegregation of Romani in Europe. I have also begun to write short stories about my family's history, from slavery, racism and familial pressures to Christianity and immigration. In doing this, I have interacted more with liberal-minded activists.

Some left-leaning persons are “fine” with my Romani heritage. But when they find out I support Trump, they act churlish and bombilate with prejudice. Here are real examples:

"Well, you're just a Gypsy—people like you and the Jews shouldn't have the same rights as the rest of us."

“Your mother should have aborted you.”

“We need another genocide.”

“The only thing worse than an entitled Jew is a living Gypsy.”

“You guys steal kids, right? Is that pedophilia?”

Trump Sees Me as an American First

In a recent conversation, a teacher who knew my heritage assumed I was liberal and voting for Joe Biden like her. When she found out I supported President Trump, she had me stay after class. She asked how I, “a person of color,” could possibly support Trump.

“He has put the focus on minorities,” I told her. “Trump has helped Native Americans who are victims of sexual abuse. His administration has promoted economic growth in impoverished communities. His policies created career opportunity programs to assist minority communities with high unemployment, low incomes and high crime rates. He increased school choice, promoted legal immigration and continued large-scale police reform."

Her response was duplicitous. “He's like Hitler; he promotes white nationalism."

"Hitler killed hundreds of thousands of my people; he committed atrocities against humanity,” I responded. “Trump has created peace in the Middle East and in East Asia. He has lifted up all communities because he believes in America. He wants all Americans to succeed. I wan—" She cut me off with the most odious sentence I have been told to date.

"Well, if Hitler had killed more Gypsies then I could have been spared listening to your ignorant comments."

The tolerant left has shown me complete intolerance. I have been shown hate, hypocrisy and genuine racism. I've had many great conversations with Democrats and liberals, but the overwhelming number of people on the left who message me with death threats and racist comments is staggering.

I will never judge someone for race, skin, orientation, religion or politics, but I put my foot down on hate. I supported Trump in 2016 because of his policies, and I support Trump in 2020 for his policies. He sees me as an American first. He doesn’t see me as separate or unequal because of my heritage. The left, on the other hand, has shown me they don’t see me past my skin, race and appearance.