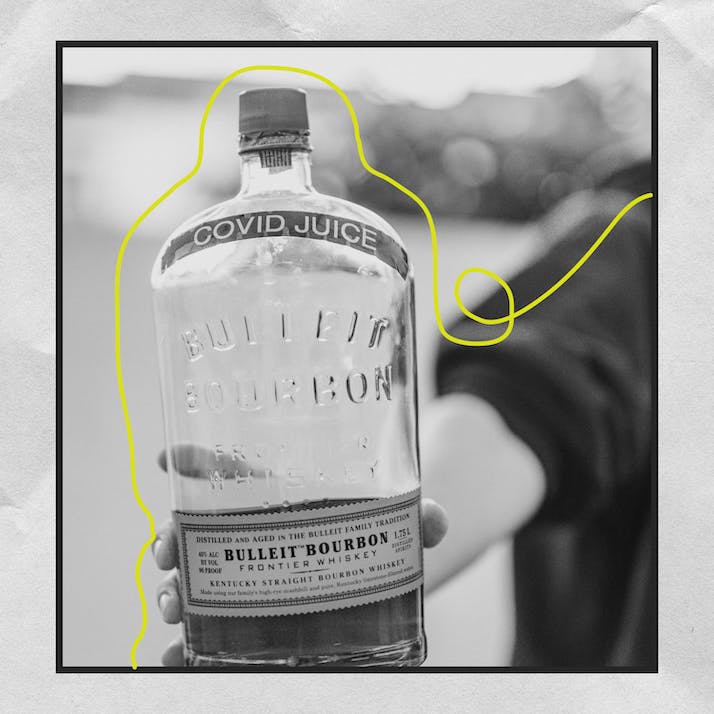 In a Challenging Year, I’m Learning How to Put the Bottle Down

A comedian and bartender discusses the challenges of giving up alcohol throughout a pandemic that’s caused lots of anxiety.

Without a “purpose” to my drinking—at a social gathering or at an exciting event—the purpose became an unknown existence and how short it might become. This led to many nights and mornings with higher than normal anxiety and immediate adverse health effects. Finally, I decided enough was enough.

Since then, I’ve been on a journey to put down the bottle forever.

“”
I decided enough was enough.

We Tell Ourselves Lies About Alcohol

The first steps for me were simple: Take a break, because I couldn’t function properly anymore. I have a very sensitive stomach and alcohol exacerbated those issues. That first break was more of a gastrointestinal reset because I immediately went back to drinking once I was OK.

My second step was trying to cut it out completely after a long night of drinking and crying over how much I hated myself. This was long before I realized that alcohol triggered my anxiety. That lasted for about a month, and then I started up again because I had a feeling things would be different. I had gained so much confidence around the ability to quit at any point that I thought dancing around it wouldn’t hurt. A few other attempts happened before I got into “Quit Lit” and realized just how badly I was lying to myself.

My adventures into the genre taught me how many lies I had been fed and believed were facts. They’d even started far before I was considering drinking. The lies we tell ourselves about alcohol are the lies we are fed by the media. We want to think that it makes us cool, but it really makes us cognitively slower—and that makes us uncoordinated and slurred. We think it makes us confident, but we never remember the “ballsy” things we say because alcohol limits our ability to create memories even after we stop drinking. We also have fallen for the idea that if you can’t drink alcohol, then it's a personal fault, instead of it being acceptable to not drink poison. These books set me on a path of anger and terror, for me and for my friends, mostly because I work in two booze-heavy industries: food and stand-up comedy.

Many stand-up comics are known for either becoming sober after addiction or dying from addiction. But no one really talks about how easy it is, in certain industries, to fuel an addiction just by your circumstance. As a comic who also bartends, I can tell you that getting a free drink or free drugs basically comes with the territory. Your access is endless and your nights are, too. Once you're awake, you see people day-drinking away their anxiety with the thing you know is causing it is a nightmare. But there isn’t much you can do when every fiber of your life is tied into something you no longer agree with.

I remember some nights—barely—where I ended up in places that I hadn’t intended. Mornings where my bank account was in the negative because I spent everything on shots that were promptly thrown up. Even waking up once beneath a couch surrounded by pink throw-up and completely naked. This particular incident, in college, should’ve scared me straight, but I was told, once again, that I needed to “learn how to control my intake."

“”
I remember some nights—barely—where I ended up in places that I hadn’t intended.

It’s Important to Cope in Healthier Ways Than With Alcohol

These "Quit Lit" books made it seem so easy to just change your routine, pick up a new habit and boom, no more alcohol in your life. But my life is in bars. If I left, I would need to start an entirely new existence, and as a young person in the middle of a global pandemic, that entire idea made me want to say “F-it” and just start binge-drinking again.

But the stubborn part of me had a feeling there could be another way to be a part of the scene, just not in the scene. I needed to create a way out without setting myself up for failure.

This may seem obvious, but if you feel like you may be drinking too much, then you probably are.

The easiest way to fix this is to create a new habit to replace that one. I think that if we learn to cope in healthier ways then we wouldn’t look at alcohol as an escape. The lot of us—the restaurant workers, the struggling artists, the minorities—can’t afford things like sober retreats or therapists like the books suggest, so we do what we can. We go on walks and do yoga classes from our apartment living rooms. And if we fall back into the same habits, we forgive ourselves and try again.