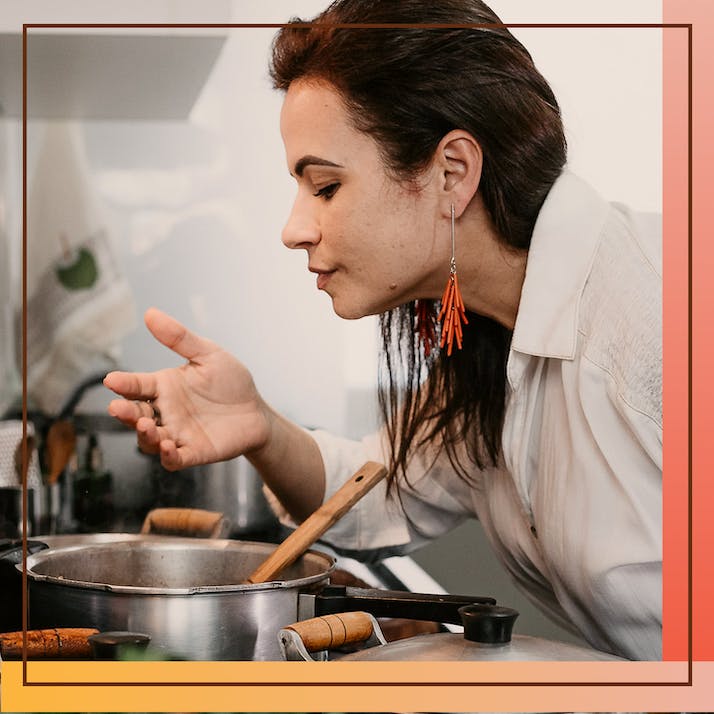 I’m Learning to Cook With Love

After my sister told me she could taste the resentment in my food, I took a new approach in the kitchen.

I remember the evening well.

I had come home from work feeling tired as usual and reluctantly set out to assemble a chicken and rice dish for my family. As we sat down to eat, my 10-year-old sister innocently stated, “This dinner has no love in it.”

The comment shocked me. I was speechless and rather embarrassed in front of my giggling siblings, whose reactions seemed to betray their agreement. There was not a trace of malice in my sister’s statement, but the sheer honesty forced me to realize how right she was. There was no love in my food, and there never had been.

“”
Cooking was regarded as one of the many chores that needed doing and one that never brought anyone much joy.

Food Never Played an Important Role in My College Life

I hated cooking and I always had. My philosophy was, if you wanted to live a full and busy life, cooking had to be your lowest priority. Any unnecessary time spent preparing a meal was a waste, I thought. There were so many other things I would rather be doing.

During five and a half years at university, I took to cooking in the way that many take to exercise, hoping to get it over and done with as soon as possible. At the time, “cooking,” for me, entailed flinging a frozen fishcake in the oven and leaving some root vegetables to boil within an inch of their life while I jumped in the shower or ran upstairs to finish off an assignment. To call my meals half-hearted might be considered an overstatement.

My minimal efforts led to rather dire creations, including soggy couscous served with tomato sauce straight from the jar and a dash of sliced raw pepper, if I was lucky. For many years, I didn’t seem to care what subpar meals I was preparing for myself. I seemed to endure it and save the real enjoyment for when I was eating out. But when I moved in with an old friend last spring, it suddenly dawned on me that you could enjoy delicious homemade food that was actually enjoyable and relaxing to make.

Watching my friend throw together weekday curries, pasta dishes and sauces with ease and enthusiasm, I came to see cooking as something to enjoy and a way of expressing creativity rather than the chore that I dreaded. I spent many evenings watching my friend experiment with herbs and spices and dig out more adventurous recipes to try. Suddenly, it became clear to me that I had developed apathy toward cooking because of my upbringing.

“”
I can’t wait to see what culinary adventures I have ahead.

My Friend Helped Me Realize Cooking Is an Art, Not Just a Necessity

I lived in a house with two parents who worked full-time. Cooking was regarded as one of the many chores that needed doing and one that never brought anyone much joy. It also was never considered a hobby, and no one ever really expressed a desire to try a new recipe or whip up “something special.” But over the past year, all thanks to my friend, I have come to see cooking as an art form rather than a necessity.

I felt so inspired that this Christmas, I decided to make the Christmas dinner all by myself for the first time in my life. So when Christmas Eve came around, I threw on the Michael Bublé album, grabbed a glass of Pinot and got cooking. And surprisingly enough, it became one of the best Christmas Eve memories I can remember.

COVID-19 had prevented our usual Christmas plans, so I thought it appropriate to serve something a little different. We had a starter of salmon en croute, a main course including duck breast, a nut roast and sweet potato casserole, all the usual trimmings and a dessert of chocolate and Baileys bread and butter pudding, served with brandy cream followed by a rather delectable cheese board.

The love invested in the preparation only enhanced the atmosphere of love shared around the table during the feast. At that special Christmas Day dinner, the very same sister who exposed my contempt for cooking all those years ago was the same sister who described the food as “surprisingly delicious.”

“You’ve made a mistake, though,” she laughed. “It looks like you’ll be on Christmas dinner duty from now on.”

I’ll admit, I’ll always be partial to eating at a restaurant, but I’m delighted to have turned a page in my cooking life, and I can’t wait to see what culinary adventures I have ahead. I’ve learned an important lesson and realized columnist Harriet Van Horne was right all along. As she once wisely said, “Cooking is like love. It should be entered into with abandon or not at all.”