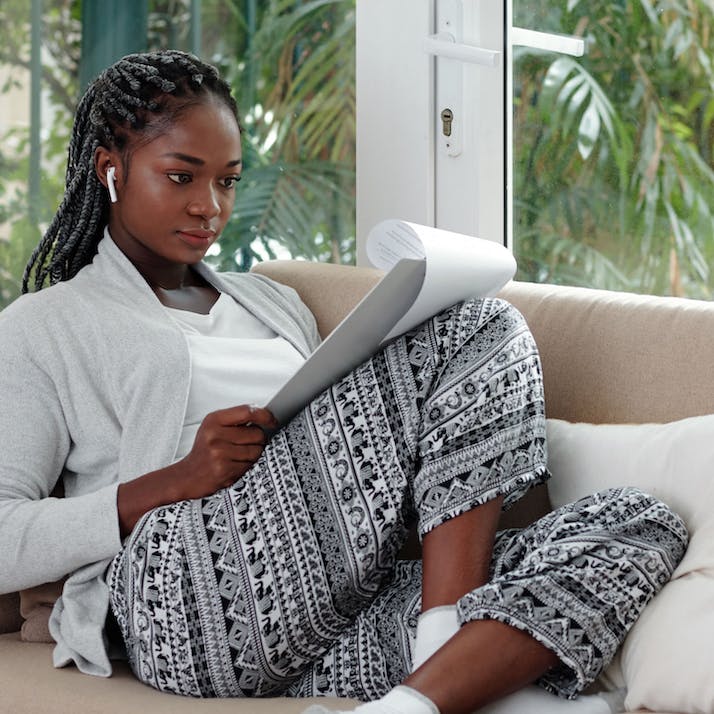 Lawyering in My Pajamas: The Pandemic Set Me Free

When I began working from home, I didn't have to worry about colleagues' insensitive comments about my appearance and accent.

Until recently, I had spent my career working in a swanky office in London. My days were spent reviewing and drafting long corporate documents and waiting for the clock to strike five so that I could dash out of the sliding glass doors and into the busy streets. Some days, I had to work into the early hours of the morning, fighting the urge to fall asleep. But it wasn’t the long hours nor the boring tasks that were killing my spirit—it was the people I had to interact and work with on a daily basis.

For starters, my accent confused my colleagues. I could see the question forming in their minds before I had completed my sentences: “Where are you from?” I dreaded recounting the tale of how far I had come, not because I wasn’t proud of how hard my people had worked to give me a shot at this coveted life but because I knew the person on the other side had no appreciation for the journey I had taken and the road I had traveled. My story would be wasted on them.

My colleagues stumbled over my foreign name. I guess the Anglo-Saxon tongue is not used to forming sounds around consecutive consonants. So every time I encountered a new colleague, I always smiled and said ever so politely, “I know, it’s a difficult name, so I am happy to repeat it as many times as you would like.” Both these statements were lies.

So many times, I wished my mother had given me a plain-Jane name—like Jane. That way, I could sign off my corporate emails with, “Kind regards, Jane,” and the receiving party would be none the wiser. My cover would not be blown. That way, I could hide in the plainness of all the sameness. As quickly as I thought that, I would feel a little pang of guilt as I remembered my grandmother. She is the one I am named after. She is the one whose legacy I carry on.

“”
My story would be wasted on them.

My Law Firm Was Filled With Predators From the African Savanna

Oftentimes, the office felt like the African savanna, and I felt like a caged animal, watched and preyed upon by colleagues higher in the food chain. At the top were the lions. Most of them were bloodthirsty and chasing the high that came with closing the next deal. They went to expensive dinners and popped champagne bottles after closing their multimillion-dollar deals, all the while slapping each other’s backs and congratulating themselves on earning even more money that would most likely be spent on alimony checks.

The lionesses were the worst, in my opinion. They had spent all their lives climbing to the top of the food chain, forsaking all else, and in the process, having to prove how competent and brave they were. It’s always the ones who must prove themselves the most who end up cannibalizing their young.

Next in line were the wildebeests. They were many in number and sheeplike in nature. They found comfort in numbers. It seemed to me that they were aware that if they strayed too far from the rest of the herd, they would become the lion’s dinner. So they moved in packs. They worked hard and partied harder. They seemed to think that if they all made the same mistakes, they would be spared the intensity of the pain of their terrible decisions. However, each one had to carry his or her own cross. The long hours, wild nights and few higher spots would necessarily mean that most of them would never make it to the top of the food chain. It also meant that for some of them, the juice wasn’t worth the squeeze.

The antelopes were divine and graceful but still a part of the madness that came with living in the savanna. They tended to be the friendliest and the most understanding, as not very long ago, they had been newbies as well. They put in the effort and worked very hard to appease all their superiors. A part of me could see myself becoming an antelope, but I was skeptical that it was a sustainable plan, for the antelopes were still prey. I learned very early on that in the savanna plains, there is no karma—there is only luck.

Then came my group: the little warthogs. Think Pumbaa from The Lion King. We were furtive, hungry and would scurry at the sight of danger. We knew where we stood in the pecking order and so we kept our heads down and hoped not to be noticed. After all, everyone kept telling us how grateful we should be for making it to such a highly ranked corporate law firm. Nobody spoke of how lucky the firm was that we worked there. For what is a firm of lawyers without the lawyers?

I Realized That Law Firm Life Wasn’t for Me

I just wanted to blend in, but I couldn’t. The other animals wouldn’t let me. I could feel their lingering looks when I was seated at my desk. I felt their gaze when I wore my natural hair out. I saw their faces scrunch up when I spoke up in my peculiar accent. I could tell that they knew that I knew that they didn’t think I was a good “culture fit” for the firm. Whatever that meant. What they didn’t know was that I was beginning to realize that this firm life was not for me either. The touted prosperity was for conformists and sadists, and I was neither.

You see, I have always been ambitious. I have always been studious. Since I can remember, I have enjoyed reading and studying. But in that savanna, my fight to survive used up so much of my energy that I couldn’t spare any to ensure that I was thriving. I could feel the vultures circling.

“”
Then the pandemic hit, and I was set free.

I Took Back My Power and Freedom During the Pandemic

It was at this point that I decided that the accolades, champagne, suits and perceived prosperity were not for me. I took off and ran. I didn’t know where I was running to, but I knew that it had to be better than the wasteland that is corporate law in London. I left the city, changed jobs and changed focus areas by joining a company that specialized in a different area of law. What seemed from the outside like a downsizing of ambitions and plans was a pivot to doing work in an environment tailored to me.

Then the pandemic hit, and I was set free. I could sit behind a computer and advise clients as I wore my hair in Bantu knots. Their gaze could no longer affect me because my body was not physically available to them. They could no longer judge me for my accent when my questions were typed out on Slack. And if they did, I couldn’t see it in their faces.

So I would like to join in with everyone who says the pandemic changed them. Unashamedly, it has let me live in my truth—it stripped my life to the bare minimum and made space for my uncorrupted self. It allowed me to lawyer in my pajamas. It doesn’t make me any worse of a lawyer. What it does do, however, is allow me to thrive in a non-hostile work environment. The physical space that I now occupy at work is for me, designed by me. A woman. A Black person. An immigrant. A Black woman who is an immigrant.