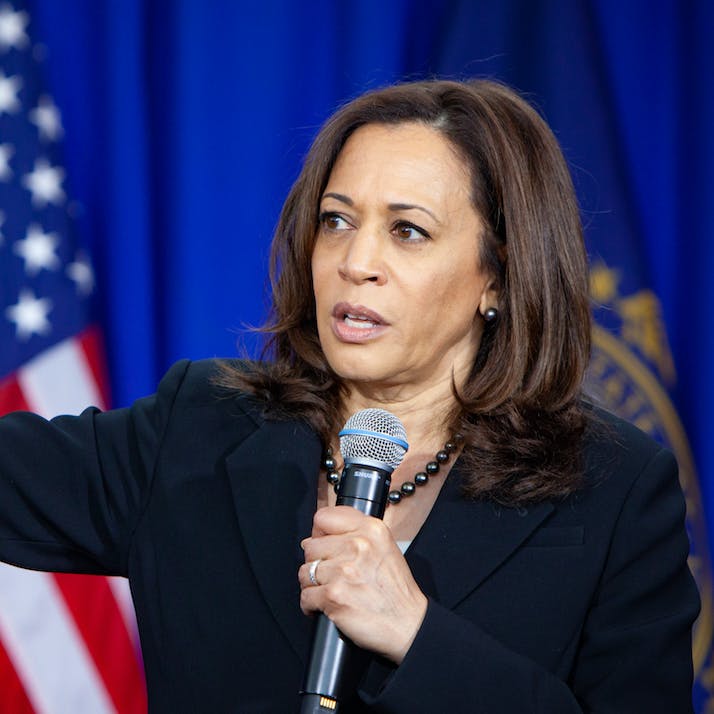 Kamala Harris and Sex Workers: Can They Work Together in a Biden Presidency?

After Harris's record of prosecution, the author wonders if they can't all get along.

It’s hard to get hard for Joe Biden.

While, in my opinion, any Democratic presidency would be better than Trump’s, he often seems like a watered-down version of Barack Obama—without the charisma or honor of being the first Black president. So, at first glance, it came as a welcome relief when Biden selected Kamala Harris, a Senator from California and a woman of color, as his vice-presidential candidate.

However, for sex workers and their allies, the vibe went from hope to nope upon an investigation of Harris’s record on sex work. As a freelance sex writer who has dabbled in sex work on the side (what, you think any writer without a trust fund hasn’t?), I find the pair’s views on sex work not only outdated but a depressing reminder that from drug policy to prostitution, these two are as old school as the pass Uncle Joe gets on his groping. While that may be no surprise for an old, white man, when the sex worker community saw Harris, we expected more.

But yet, when Harris was District Attorney of San Francisco, from 2004 to 2011, she built the foundation for her anti-sex worker reputation. As Rolling Stone reported, in 2008, she strongly opposed Prop K, a ballot measure created to decriminalize prostitution in San Francisco. She went so far as to call it “completely ridiculous,” while asserting that it rolled out “a welcome mat out for pimps and prostitutes to come on into San Francisco.”

During her time as Attorney General of California, from 2011 to 2017, she declared war on Backpage.com, arguing that it was a hub for sex trafficking. While some shady business went down on Backpage, it was, by and large, a safe space for sex workers to not only obtain work but vet clients. Backpage’s closure didn’t do much to stop sex trafficking, but it did cost many sex workers much of their livelihood and force them onto the streets where it’s much more dangerous and difficult to vet a client. “We really do want to protect child trafficking,” says my friend and digital performer and educational sex worker Daya Dare. “We just need a solution that doesn’t conflate both things.” Dare and I met during an online sex party during COVID, during which we were both paid to perform. As any sort of in-person work is becoming few and far between, digital platforms offer hope not just for friendship but for paid opportunities—if the government will allow it.

Most recently, as a United States Senator from California, she co-sponsored the infamous FOSTA-SESTA anti-sex trafficking legislation, which once again, did little to curb actual sex trafficking but put sex workers across the country out of work and at risk by holding websites responsible for third-party ads. The bill is one of the greatest attacks on free speech in the online era. “It feels like a betrayal from a woman, and especially a woman of color, but there’s something there that does give me hope,” Dare says. “Maybe she’ll never change, but a woman of color is more open or has the potential to listen to other women of color.”

“”
Some sex workers even prefer Trump.

Kamala Harris on Sex Workers in 2019

Recent comments suggest that Harris’s stance has evolved. In a 2019 interview with The Root, when asked if sex work should be decriminalized, she replied, “I think so. I do.” While “I think so” is a better response to sex work decriminalization than “completely ridiculous,” it’s far from ideal. Whether you’re asking someone if they want to go on a date, work with you or decriminalize sex work “I think so” isn’t exactly an enthusiastic “yes.”

The assumption is that should a Biden/Harris administration take on sex work decriminalization, it would likely be partial decriminalization, otherwise known as the Nordic model (because it’s practiced in Nordic countries). This approach criminalizes Johns, those who buy sex, but not sex workers who sell it. So, while a reduction in sex worker arrests would be fantastic, is it even decriminalization if it strips them of their livelihood? “I wouldn’t exist without my clients,” Dare says.

Some sex workers even prefer Trump. “I think it comes down to this: Trump has been a sugar daddy and client (not of mine, in general) for years,” says Alice, a sex worker who wishes to remain anonymous. “Biden and Harris are hypocrites who have put millions of sex workers and minorities in prison and will not get my vote.”

Harris Has Shown She’s at Least Willing to Listen, and That’s a Start

However, regardless of Trump’s personal life, it’s clear that he’s willing to sell out to his right, Christian base. And, if we’re directly comparing vice-presidential candidates, let us not forget that Mike Pence is a conservative Christian true believer suspected of even supporting conversion therapy. Dare is right: While one can picture Harris sitting down with sex workers, POC and members of LGBTQ+ community to discuss decriminalization, her Republican counterpart won’t even have dinner alone with a woman who isn’t his wife.

“The first thing we have to think about is: Do we want to continue on the path that we’re on or do we want to take a risk? Although she’s in an extreme position of power, having a Democrat in that position means we are in a better place to align the rest of Congress. That should be priority one,” Dare says. I agree.

Biden/Harris isn’t ideal for a Democratic ticket. But by looking at all of the evidence, they are more open to listening to public opinion, which means that sex workers and their allies must continue to fight at a grassroots level. A simple walk down the block, filled with closed businesses, discarded face masks and an uptick in homelessness show quite tangibly the Trump administration has failed. It’s even worse than we could have imagined and we must use the next few months to get him the hell out.