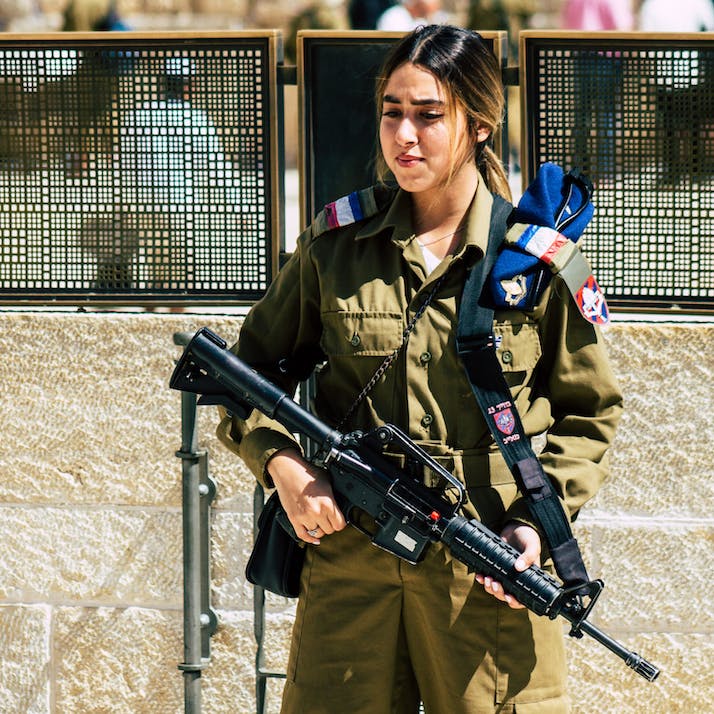 What It’s Like as a Jewish Woman Inside the IDF

My mandatory enlistment into the military showed me the terror threats levied against Israel citizens every day.

As someone who’s grown up in Israel, living on the border with Gaza and serving in the Israel Defense Forces (IDF), I have been affected by the Israeli-Palestinian conflict in various ways over the years.

I’m a 24-year-old Jewish Israeli woman who grew up in a small village. I feel fortunate to have been brought up in a loving, close-knit family with a strong Jewish and Zionist identity. My grandfather is a Holocaust survivor and both my parents immigrated to Israel when they were younger.

My Life in the Israeli-Palestinian Conflict

My first serious encounter with terrorism occurred was when I was 15. Three of my friends were injured in a terrorist attack; they were deliberately run over by a Palestinian from Hebron while they were standing at a bus stop after school. This shocking event had a devastating effect on me. In that instant, my sheltered bubble abruptly burst and I felt I wasn't safe in my own country. I couldn't understand why my innocent friends had been the target of such a brutal act of violence and hatred, their only “crime” being Israeli Jews living their daily lives.

In Israel, there is a policy of mandatory military enlistment for both men and women. At age 18, we are drafted into the IDF to serve our country. Men enlist for a minimum of two years and eight months, and women for at least two years, unless they are combat soldiers, in which case they serve the same amount of time as men.

It might sound odd to people outside Israel, but here that is the norm. Although this policy is a necessity generated by Israel's precarious security situation, I see army service as a privilege. The responsibility of keeping our country and people safe is shared among all of us and creates a bond that is hard to explain to people who haven't served in the army.

On the Border With Gaza

My military service was both fascinating and extremely challenging. I was assigned to an intelligence department that was part of a larger combat unit. As a part of my job, I gave combat soldiers information about terrorists who were to be arrested. I had access to information that helped me to understand just how many potential terror attacks are thwarted by the IDF before they happen.

On the one hand, this realization was terrifying and hard to cope with—so many people want to murder Israeli citizens on a daily basis. On the other hand, however, I was greatly reassured that our army is strong enough to handle this threat, and I was inspired to do whatever I could to further the noble cause of protecting my family, my people and my country.

During my first year in the IDF, I made the decision to move to the Gaza border with a group of friends. I moved to a very small kibbutz, called Kerem Shalom, which had at the time about 25 families living there. During the week, I would live at my army base and, on the weekend, instead of going home to my family, I made a new home in Kerem Shalom. The kibbutz is situated 30 meters away from the border with Rafah, which is inside the Gaza Strip, and approximately 500 meters away from the Egyptian border.

Over the years, this kibbutz and many others on the border with Gaza have suffered from rocket and mortar fire, causing loss of life and damage to property. This is not only the situation during wartime but a perpetual threat that hangs over the lives of citizens living in this area. There is at least one bomb-proofed room in every apartment, and every few meters throughout the kibbutz, there are bomb shelters.

The reason for this is that from the second the siren is sounded that alerts residents of a bombing attack, we have between five to ten seconds to find shelter. Everyone's door is always unlocked, and it's not unusual to have someone bursting in to share your safe space. Children are taught at a very early age to run to the first available shelter, even if this is in someone else's home.

In 2014, during Operation Protective Edge, the residents were advised to evacuate, and in the years following the operation, it was understandably not easy to increase the kibbutz population.

So why would I move specifically to one of the most dangerous locations in Southern Israel? Why would anyone choose to live there? I firmly believe that the borders of our country are defined by where there is life, and not by walls, fences or military presence. Israel faces hostility on several fronts. If we allow the threat of terror and violence to scare us away from our borders, eventually our tiny country will disappear.

After the most recent operation, Guardian of the Walls, during which fifteen mortar bombs fell inside the kibbutz perimeter, and dozens just outside, our community started a project to plant trees. A tree was planted in every hole left by a mortar bomb. In my opinion, the real victory is to increase life where Hamas tried to cause death and destruction. By planting these trees, we bring new energy, light and hope. This is our message.

“”
A tree was planted in every hole left by a mortar bomb.

Why My IDF Service Led Me to Move to the Border

Today, over 40 families live in Kibbutz Kerem Shalom, and I am proud to have been part of this process of renewal.

I completed my IDF service 18 months ago. Today, I'm still living on the Gaza border. I currently work in a very special program, preparing Bedouins to enlist in the Israeli Police Force. I teach Hebrew and mathematics and am a group counselor. I am privileged to teach and accompany an amazing group of students, all of whom want to contribute to society. This time around, the military operation was a very different experience for me.

No longer a soldier, I was now on the homefront, and it literally hit "close to home.” The program I teach in is also located on the Gaza border; therefore, we were forced to conduct our lessons via Zoom, each of us sitting in our own bomb shelter. Some of my students don't have protective shelters where they live and were as exposed and vulnerable to Hamas fire as we were in our kibbutz.

One of my students, who is married to a wife in the advanced stages of pregnancy, was one of those unlucky people who didn't have a safe room in which to shelter. I invited the couple to come and stay in my family's home, which is situated in a comparatively safe area. He was so touched by this gesture, and it led us to a heartfelt conversation in which we shared our experiences. Clearly, we come from very different backgrounds, but we have a very important goal in common—doing good within our own circles, and in this way, creating a positive influence on our society and the world around us.