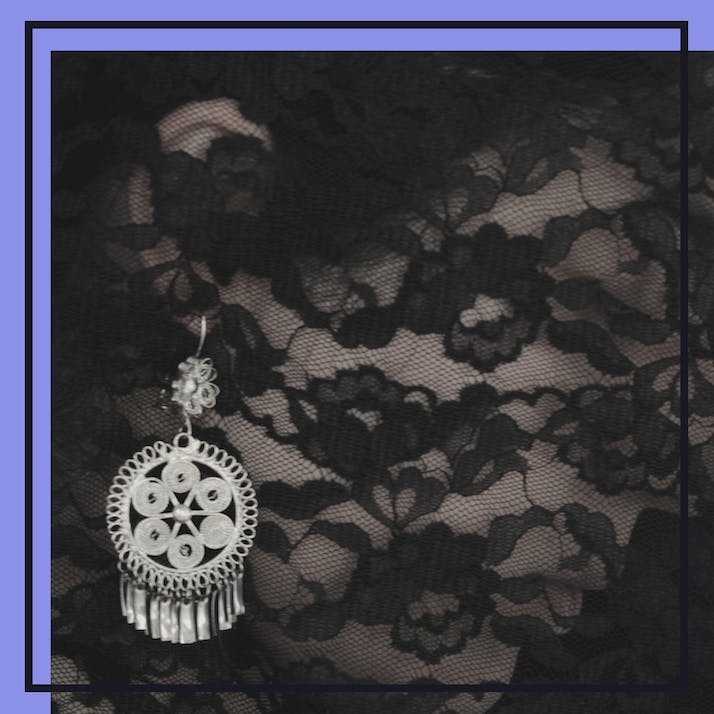 I was raised in a mixed religion home and am still trying to define my place in the world as a Jew.

My dad’s Catholic-ish, and after a nasty divorce from my birth mother (who I cut ties with a long time ago, and whose Spanish family was uber-Catholic and uber-conservative) he married my step-mom (who I actually call mom), a Jewish woman from Mexico City. I was raised in a mixed religion household where we always celebrated both Catholic and Jewish traditions and holidays, some out of true conviction and some simply because we were used to it.

As a kid, I read the Haggadah every year on Pesach and attended Midnight Mass on Christmas—begrudgingly and mostly for my grandmother’s sake. Despite the mixed religious vibe at home, in the “outside world,” I attended Sunday school and had a huge party for my First Communion (but not bat mitzvah), if only because it was what was expected of young girls of a certain age, social and economic standing in my community. Where I come from, Catholic life plays a huge part in daily life and social events, to the point where I even chose to attend a prestigious Catholic high school despite not sharing the beliefs they stood for. I always knew I wasn’t comfortable with the default Catholic path that had been chosen for me; it wasn’t my truth. I vividly remember sitting at the park where my Sunday school teacher would take us during spring lessons; I’d be that one annoying kid asking “how” and “why” about everything she said. The answer was always the same: “Because that’s the way it is; you gotta have faith.” That answer simply wasn’t good enough for me.

“”
In a way, I’d always felt like the only (Jewish) girl in the world.

I Discovered Ways to Embrace My Judaism, Even When I Felt Isolated

Judaism felt more like my truth: I was not only allowed to question everything but I was often encouraged to do so. Things were never taught as black and white; there’s always a scale of grays to consider. I could explore and discover religion at my own pace instead of there being one absolute way of thinking and doing things. I remember first calling myself a Jew at around 12 years old. I never did this in public, just when I was alone, in my room, daydreaming: “Am I a Jew? Yep. I think I am; I’m Jewish.” I began throwing the word around more and more around my friends and my parents. It wasn’t until I was 15 that I finally decided to fully embrace this: I am a Jew.

Of course, this sudden—at least it seemed sudden to most people around me—“change” in beliefs wasn’t always easy. As I said, a big part of social life in my small town was deeply tied to Catholicism. It was an uphill battle for me to be taken seriously. From my extended family refusing to acknowledge my desire to officially convert to Judaism to my father—who doesn’t even consider himself a Catholic anymore—constantly telling me “it is just a phase” I’d get over. Despite all this, I decided I needed to be true to myself. “I am Jewish, no matter what” is what I’d keep telling myself. “My Jewishness is valid, even in a city with this few Jews.”

Living in a place where there was no real Jewish community meant I was alone on holidays (the few other Jews would usually travel abroad for holidays), save for my mom and grandma, both of whom had been losing interest in their Jewishness at the same time as I started becoming more interested in mine. I love my family, but it was hard not having a community outside of them that I could share this with. While my town had once been alive with Jewish life back in the early 1900s, there were now less than ten other Jews in the city, and none of them were even close to my age. I stuck out like a sore thumb; everywhere I went, I’d be called la Judía—the Jew.

Yeah, I was aware that not everyone meant it in the best way, but I was still proud of it. I loved being different in a way that nobody else at school could. I’d always been in love with the spotlight, both literally and figuratively. I did everything I could to stand out: I joined my school’s show choir and drama club; I joined the Model United Nations team; I’d bake challah every few weeks and share it at school (not to toot my own horn, but everyone always raved about my “Jewish bread”); I volunteered with my high school’s community service brigade; and I ran for homecoming queen my freshman year of high school. At 16, when offered the chance to give a conference about Judaism to some seminary students, I jumped at the chance. I wanted people to know who I was and never forget my name.

I Experienced Antisemitism From My Family and My Community

Turns out, though, that standing out and being different in the way that I was different wasn’t always a positive thing. I’ve experienced everything from covert antisemitic attempts from my very religious aunts trying to make me “see the light” and reconvert me back to Catholicism and good friends trying to sneakily “show me the path of light” by inviting me to any and every Protestant Bible study group and youth retreat, to teachers at my Catholic high school telling me I’d go to hell for negating Jesus Christ as my lord and savior and classmates “jokingly” yell at me that I shouldn’t win the WWII debate in history class because “Hitler wiped away all of” us.

The antisemitism I faced was mild and mostly passed off as concern or some other “positive” thing, but it was still very real, and while I usually tried to let it slide and make snarky comments to those who crossed me or questioned my Jewishness—“I don’t believe in hell, but either way, isn’t that where the party’s at anyway? It’s where all the fun people go!” or “Well, the guy missed a spot because I’m still here.”—the negativeness their words and actions carried did have some effect on me.

I somehow ended up thinking that because of my less than traditional upbringing, I wasn’t a valid Jew. I constantly felt like I had something to prove simply because I wasn’t someone who had spent her childhood at sleepaway camp, going to shul on the high holidays and had a real bat mitzvah. I did not feel Jewish enough. I found myself regularly trying to overcompensate for this: I started dating more observant people, trying to validate my Jewishness through them. This, of course, never went well: I’d feel left out when they went to temple and shut their phone off for Shabbat every weekend; I couldn’t keep up with their use of Hebrew and Yiddish in casual conversation; and I struggled to remember every Jewish holiday (I now know I was too hard on myself back then; there’s too many to actually keep track of on my own—thank G’d for the Reminders app on my phone). Instead of finding the validation I so desperately sought, the feeling of being “not Jewish enough” was only exacerbated. But then again, when does trying to mold oneself into someone they’re not ever turn out right?

I Found My Jewish Community—and Myself

It’s taken a few years and a bit of trial and error to find comfort in my Jewishness and figure out how exactly I fit in the world as a young Jewish woman. I realized that instead of longing for a community that didn’t exist in my hometown, I could instead find one online—that’s the beauty of the internet; there are communities for everything and everyone. I started following Jewish artists, content creators, designers and writers. The pandemic helped this process, as it forced communities and congregations to go fully online and fully remote—finally! Little by little, I started finding my people—my tribe, if you will. My Jewish friend circle grew and with it, my knowledge about all things Jewish. In a way, it felt like finding home.

Somewhere along the way, I started writing for a Jewish media site, which opened a whole new set of doors and brought some amazing new Jews into my life, some of whom I have shared experiences with, some who are showing me the many different ways that one can be a valid and worthy Jew in the world. In this process of spiritual discovery, I have begun to find myself, bit by bit. I’ve confirmed some personal beliefs that aren’t necessarily related to religion but are somehow supported by it. I’ve felt empowered to try new things, new foods and just generally to get out of my comfort zone. I’m slowly, but steadily, finding my place in the world as a Jewish woman and discovering how to navigate my Jewishness in a way that isn’t tied to my mom’s, my friends’ or my partners’—in a way that’s entirely my own.