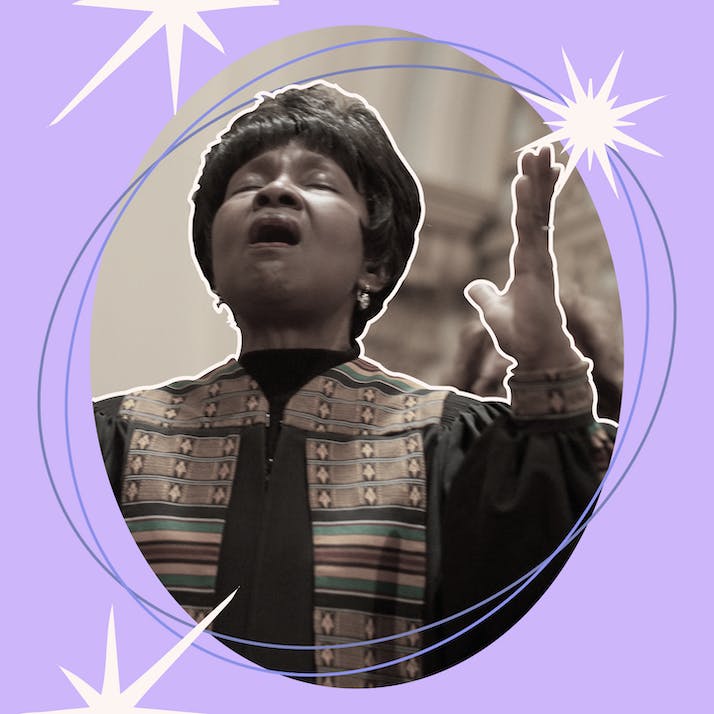 I know Christian music isn’t made with me in mind. That’s part of why I enjoy it.

“What would you give,” sings a rough tenor, and then another responds with falsetto keen, “in exchange!” Then they harmonize together, the voices intertwined, stretching for heaven.

The song is an old Monroe Brothers number from the ’30s, but my favorite version is a 1963 duet; Doc Watson provides the slow, delicate guitar strum, and Bill Monroe adds distinctive crystal mandolin runs and high tenor. It’s a song of almost unendurable longing, which manages to be both delicate and ragged, dreamy and bleak.

It’s also a song about how I, personally, am going to go to hell. When they sing, “Mercy is calling you; won’t you give heed?” my answer is pretty clearly, “No, thanks.” I’m a Jewish atheist; I don’t believe Christ is lord, and I don’t even think I have a soul. Watson and Monroe are singing lovely harmonies to my wrongness and my eternal damnation.

“”
It’s also a song about how I, personally, am going to go to hell.

Western Music Is Steeped in Christianity

You’d think it would be off-putting to have people tell you that your life choices are going to lead to such catastrophic consequences. But I’ve long been a fan of both white and Black gospel music and of other Christian performers as well. I love Johnny Cash’s “Were You There (When They Crucified My Lord),” with Anita Carter providing heavenly high notes. I adore the Soul Stirrers’ “By and By,” with R.H. Harris’ sweet yodel urging on Paul Foster’s gospel shout. I can listen over and over to the hoarse, chesty bellow of Rev. Sister Mary Nelson or the icy quaver of Lloyd Chandler, even though I am definitely not ready for judgment and am unprepared for eternity. And I’ll wail along with Ozzy when he declares, “Your world was made for you by someone above/But you choose evil ways instead of love!”

I don’t think the world was made for me by anyone in particular, but if, like me, you’re obsessed with roots music, and with music in general, the Christians are hard to escape. Four-part harmony in Western music came out of the church, as did seminal pop vocalists, from Sam Cooke to Beyoncé.

I don’t just like Christian music because I can’t avoid it, though. Like most Jewish people and most atheists in the U.S., I’ve spent the bulk of my life in a culture with a preponderance of Christian people. It seeps in. Christian aestheticization of wounds and death and despair is my weird death cult, too, from Grüenwald’s twisted crucifix to The Omen.

When Roberta Flack sings, “I told Jesus/‘Be alright/If you changed my name,’” I’m moved by Flack’s light voice pulsing and soaring over Ron Carter’s soulfully ominous bassline. But the message of transformation, ostracism and triumph amid degradation (“He said, ‘Your father won’t know you, child/If I change your name’”) is meaningful too.

I Hear Gospel Music in a Different Context

You can’t live your whole life surrounded by crosses and not end up feeling like Calvary is meaningful. Even if you’re an atheist and a Jew, you end up carrying the cross around. When I curse, I often do so in Jesus’ name, and when I think about redemption or forgiveness, it’s bathed in Christian imagery and references to a heaven that Jews mostly and atheists definitely don’t think exists and are supposed to be barred from. Jews aren’t major targets of bigotry in the U.S. like some other groups, so the sense of disorientation isn’t hugely traumatic or something I have to think about a ton. But you do occasionally remember the dominant culture doesn’t consider you to be a part of something you are, in fact, a part of. Like all those Jewish people who got their patronymics anglicized by immigration officials or for their own convenience, your name gets changed whether you want it to be or not.

So yes, part of the reason I like Christian music is that I’ve been assimilated into a culture that kind of thinks I’m damned (“Mercy is calling you; won’t you give heed?”). I enjoy Christian music because it’s my music, somewhat despite myself.

But I think I also enjoy it because it isn’t my music. My wife, whose family is from Appalachia and who has honest-to-God Bible thumpers among her relatives, finds my enthusiasm for Christian music positively perverse. When the Louvin Brothers sing, “That word ‘broad-minded’ is spelled S-I-N,” she hears it in the context of some decidedly small-minded family members and their views on out-of-wedlock pregnancy, or queer people, or even going into bars.

For me, though, Christian music is a lot less fraught. Yes, I live in a country with a lot of Christian people, but to the extent that religion has irritated me in a close personal way, my resentment is directed at Hebrew school, not church. There are definitely Christians in the political realm who would like to make my life and my family’s lives and the lives of most people in the country a misery, and I cordially hate them. But having people just preach at me doesn’t trigger any particular trauma. I wasn’t there when they crucified your lord. It’s not about me.

“”
Even if you’re an atheist and a Jew, you end up carrying the cross around.

In her book Dialectic of Pop, Agnès Gayraud argues that part of the pleasure of pop music—by which she means music made for records, basically—is that it’s always both about you and not about you. The whole point of a record (or an MP3) is to get music out of its original context and take it somewhere else where it didn’t originate and where it doesn’t quite belong. That’s why there are so many pop songs about traveling. Pop is always motorvatin’ over the hill or leaving on a jet plane or, in gospel, putting on its travelin’ shoes.

Yes, Marion Williams and the Clara Ward Singers in “Travelin’ Shoes” are talking about walking right into heaven. But they’re also talking about leaving their selves behind and becoming disembodied voices. The joy of the song comes in part from a sense of togetherness in the community of the saved. And the joy comes in part from a sense of being freed from any one community, as you cast off the dust of this world for the next. And in part, it comes from the tension between them. It’s “the unresolved dialectic between roots and uprooting,” as Gayraud puts it, swooping between Williams’ earthy growl and the high pitched “ooooooo!” The song belongs here, and it belongs to everyone, at the same time, divine and human at once.

Marion Williams’ producer in her later years, and her greatest fan, was Anthony Heilbut, another Jewish atheist. “What we admire is so clearly beyond our own reach,” Heilbut writes in his most recent book, The Fan Who Knew Too Much. That’s part of the wonder of it; the music isn’t yours. And then if you love it enough, in part because it isn’t, it is. Much great Christian music is about telling me I don’t belong. But it’s also about stepping out of those immanent boxes, Jew and gentile, to all be one in some divine something. You don’t have to give your soul in exchange. You just have to listen.