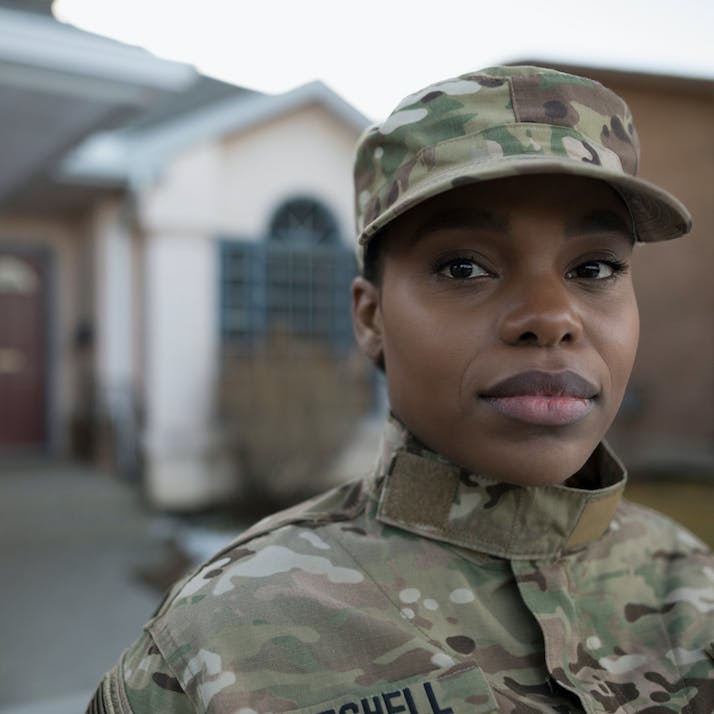 An Iraq War Veteran’s Story: How I Got My Purple Heart

A veteran of the War in Iraq tells her bloody tale.

"It's not all her blood,” I hear my Sergeant First Class say to the medic. I am sitting on the exam table staring straight ahead, not exactly certain where I am or what has happened.

The medic looks at me and then nods at the NCO who accompanied me to the clinic. He asks if I am hurt and my response comes out as a shrug. I’m not trying to be difficult: I truly don’t know how to answer the question. I am in a daze, completely oblivious to any pain and unsure of where all the blood is coming from.

The medic begins examining my head, probably due to the abundance of blood covering my right ear, neck and shoulder. He discovers small pieces of shrapnel lodged behind my ear. We will later joke how some pieces had literally pierced my ear. He picks the shrapnel out, one piece at a time, and deposits each with an audible clink into a metal pan sitting next to the exam table.

He speaks slowly and quietly and says, "You know, when you get back to Anaconda, there are counselors you can talk to. Your sergeant told me this isn't your first attack. You can go home if you want. No one comes back the same after they have been through what you have been through."

I nod and clear my throat to speak for the first time. I try to swallow but my throat is dry from the smoke and debris of the explosion. All I can muster out is, "Do you think I could keep a few pieces of the shrapnel? I think I can make an earring out of it."

“”
This was my choice. I wanted to be in the lead.

Just a few hours prior, we were on a routine return mission back to our base camp. We were truck drivers and it was May of 2004. We drove all over the country delivering supplies to soldiers. Water, food, ammunition: You name it, we hauled it. And our vehicles of choice were M915s—traveling targets on wheels.

On May 25, 2004, shortly before noon, the 915 I was driving was hit by a roadside bomb. We were the lead truck behind the first gun truck.

This was my choice. I wanted to be in the lead.

My A-driver, my battle buddy, my best friend and soon-to-be-dad carried an M-249 machine gun. We always agreed that the lead of the convoy was where we belonged. One minute we were taking the curve upward on the ramp leading to a bridge; the next minute we were deafened by the loudest sound I’ve ever heard. The blast was accompanied by a rush of debris, thick smoke and overwhelming pressure.

No sound. No sight.

I must have blacked out, because the next thing I remember is the steering wheel shaking. I can't see, I can't hear, but I can feel the truck. I push down with my right foot on the gas pedal, no clue where I’m headed or what has happened.

After seemingly forever—but only seconds in reality—the smoke begins to clear and I can identify my surroundings. Although I can see, I still can’t hear anything. I look over to my right and see my battle buddy covered in blood. He is holding his face, rocking back and forth. I can tell he is shouting, but I can’t hear his voice.

He falls over on me. He begins clawing at his face. That’s when I see it. The blood is spewing from his forehead and right eye socket and his right eye is hanging from a thread. I can tell he is screaming, but I still can’t hear him. I rub his back and I tell him it's all good.

I can get us out of here.

Not All Iraq War Combat Stories End in Death

I call in a medevac and am later told I was talking in a jumbo mess of words. Clearly, the trauma from the explosion was playing with my communication skills. The truck begins to lose momentum. It's beginning to stall. I get to the top of the bridge and park it as close to the bridge as I can. I have over 20 trucks behind me that need to get by. I tell my battle buddy, my best friend, this soon-to-be-dad I will be right back. I jump out and flag down a truck. The KBR-manned civilian truck panics and drives by. The next military truck drives by. They are following protocol, but I need help. I need to get my partner medical care.

I need it now.

I go back to our truck and scream at him that I am going to get him out. I guide him to crawl across to the driver’s seat and I scoop him out. I drag him on to the ground and I cradle him like the little brother he is to me. Someone shows up and they hand me a bottle of water.

I pour it over his head to truly assess the damage and that’s when I notice that his right eyeball is gone: It must have fallen off in the truck.

No one is hit.

We get him into a truck that stops and up a few hundred yards and we create a secure site for the medevac to land. I stay with the convoy and grab all our weapons, ammunition and radio from our tuck.

I jump into another truck speeding by and I think someone tells me to stay put in the truck. But I don’t. I get out and pull security.

After the medevac takes off with my battle buddy, my best friend, this soon-to-be dad, we head to the closest camp in a town called Taji.

I am taken to the medics.

I am covered in blood.

It's not all my blood.