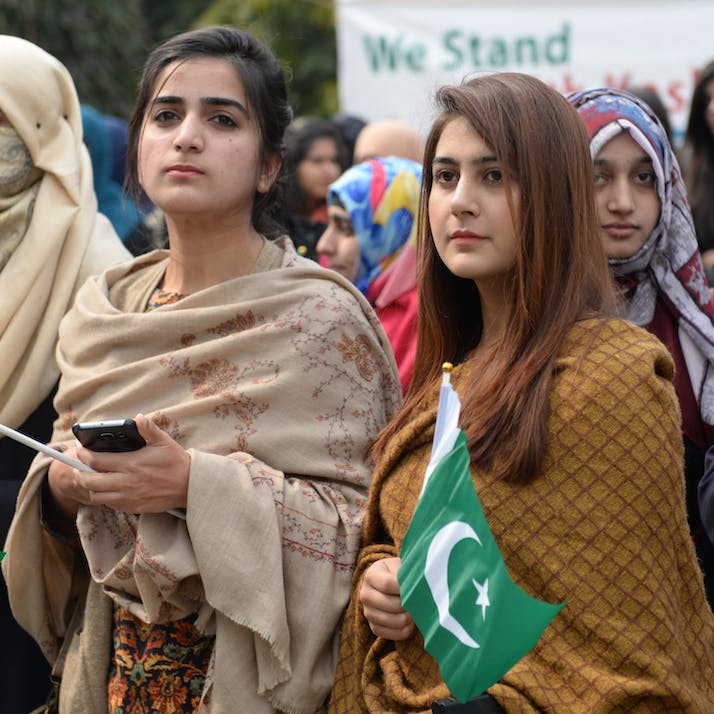 The Invisibilized Identity of Being a Kashmiri

My people are disappearing, and I'm not sure where I fit in.

I am a half-Kashmiri, half-English woman. But when people inevitably ask me where I’m from or question the origin of my very non-English-sounding name, my response often leads to blank expressions. Perhaps you also are staring at the screen now with that same blank expression: Where is Kashmir and why does it matter? I don’t blame you for wondering; Kashmir has been hidden from sight, and it's an identity that is quickly being erased.

Let me give you a brief history lesson to help explain. During the Indian partition of 1947, the British withdrawal led to a relentless struggle over Kashmiri land. Existing as it does in such a crucial geopolitical position in the northernmost point of India, and previously known as the "jewel in the crown of India," neither India nor Pakistan were willing to cede the Muslim-majority territory. So after the first of two wars over the region, Kashmir was split between both countries. Maintaining possession of Indian-administered Kashmir has been an obsession for India ever since.

This obsession has taken form in the shape of violence over the land and the people. The Indian armed forces roam every street corner; curfews infringe on everyday living; dissent is persistently squashed. Most recently, Kashmir was stripped of its statehood (which gave Kashmiris exclusive land rights, a separate constitution and the right to make its own laws) without any consideration of Kashmiri voices. In fact, any voice speaking out about Kashmir is often actively silenced or quickly fades from public view. And now, effectively stateless, we are being dissolved into the wider Indian population.

Kashmiris have a strong sense of identity, distinct from both India and Pakistan. My sisters and I have inherited our father’s Kashmiri pride, which is why we often choose to call ourselves Kashmiri rather than Indian. Tired of being simply a trading card or an object to be fought over, Kashmiris have continually cried out for recognition and justice. After all, you would think the most militarized region in the world would garner a bit more international attention. That’s right, Kashmir is the most militarized region in the world. But why does it feel like no one cares? Do I even have a right to care?

“”
Kashmir has been hidden from sight, and it's an identity that is quickly being erased.

Is My Kashmiri Experience Valid?

Kashmir is everywhere in my family’s home. The curtains and cushions are made from Kashmiri-embroidered material; the pictures on the walls were captured by my mother and document the stunning beauty of the mountains and lakes; Kashmiri carpets cover our floors and hang as tapestries on the walls; an intricate mini-replica of the hand-carved wooden houseboat of my dad’s family business sits on a bookshelf.  We grew up playing carrom, a board game that lives behind our sitting room door, on a 74 by 74 centimeter board that my dad carried back from Kashmir, and we ate our dinner as children sitting on a Kashmiri floor mat.

Despite this little Kashmir we created, it's not actually Kashmir. This home is nestled in the heart of London, far away from the land and family of my father. I can’t speak Kashmiri; I didn’t grow up surrounded by mountains or working on the family houseboat; and I am not a Muslim. I am Kashmiri but have never directly experienced the violence that has been inflicted upon almost every Kashmiri since 1947. I feel a strange mixture of fortune and guilt at that fact. I have increasingly questioned my own identity and the role I should play in speaking out. Can I claim my Kashmiri identity if I’ve never fully known the Kashmiri experience? Does my being mixed-race mean my Kashmiri identity will disappear even more quickly?

On the few occasions we have been able to go back and spend time with my family, I felt like my cousins treated my sisters and me differently. We always showered one another with love, but we could never escape the fact that we were their cousins "from the West." There is a collective belonging that develops from shared experience, especially painful experience. And we haven’t shared in our cousins’ painful experiences of growing up and living in a conflict zone.

I am not saying I want to, and it would be inauthentic of me to claim that I understand that kind of struggle. I am ever grateful to have been sheltered from that pain and recognize my great fortune. But it does mean I am distanced somehow from that shared identity. Then, at the same time, how can I deny my identity? Ignoring my Kashmiri identity would be like severing my connection with my beloved father. It would be like pretending that I don’t have the fairer skin tones and odd red hairs that are typical of Kashmiri heritage. Or ignoring the many times I have been told that I look like my father or share the same oval-shaped face as Mama, my dad’s mother. It would be equally inauthentic to not claim the truth of this. And being in the U.K., I am also in a unique position to actually be able to speak out about Kashmir, an opportunity many Kashmiris suffer for trying to obtain.

“”
Can I claim my Kashmiri identity if I’ve never fully known the Kashmiri experience?

Another reason I could never deny my Kashmiri identity is due to the things I have experienced that are uniquely Kashmiri. During the 2019 Kashmir lockdown (yes, lockdowns were a thing for people even before COVID-19), the country's communications blackout meant we worried for weeks whether our family was OK; I wonder whether it will be curfews or lack of money that will stop my cousins from going to school. I have witnessed the effort and struggle of my parents as they strive to financially support our Kashmiri family, and I have seen the agony on my dad’s face as he listens to his siblings describe how hopeless they feel.

This is not an essay, so I haven’t given you my theories on why the plight of Kashmiris at the hands of the Indian government is so ignored and seemingly disregarded by the international community. But another reason why I claim my Kashmiri identity is because of the anger I feel at the injustice of it all. This anger stems from a deep-rooted feeling of belonging. It drives me to speak out in a way that I don’t often (but definitely should) speak about so many other unjust situations in our world.

Witnessing violence is crucial in drawing attention and recognition to a disappearing people. But remembering we are all whole individuals in the midst of this is of equal or maybe even more importance. None of us are entirely defined by our painful experiences. We are defined by how we continue to live in spite of, or maybe because of, them.

I wouldn’t want you to walk away from reading this thinking Kashmiris are two-dimensional people shaped by violence and that's all. We experience pain and joy, as well as everything in between. My Kashmiri family struggles, yes. But part of struggle is choosing to exist in the everyday, normal moments when they happen, too. They still excitedly shout at the television when Pakistan plays India in cricket and dance when their children get married and take selfies and post them on social media and sing along to the songs from that latest Salman Khan film.

I may not know Kashmiri struggle in the same way as many of my family members, but identity goes beyond borders. I see and feel their pain as well as the fullness of the Kashmiri identity. As a Kashmiri woman, I long for the world to do the same.