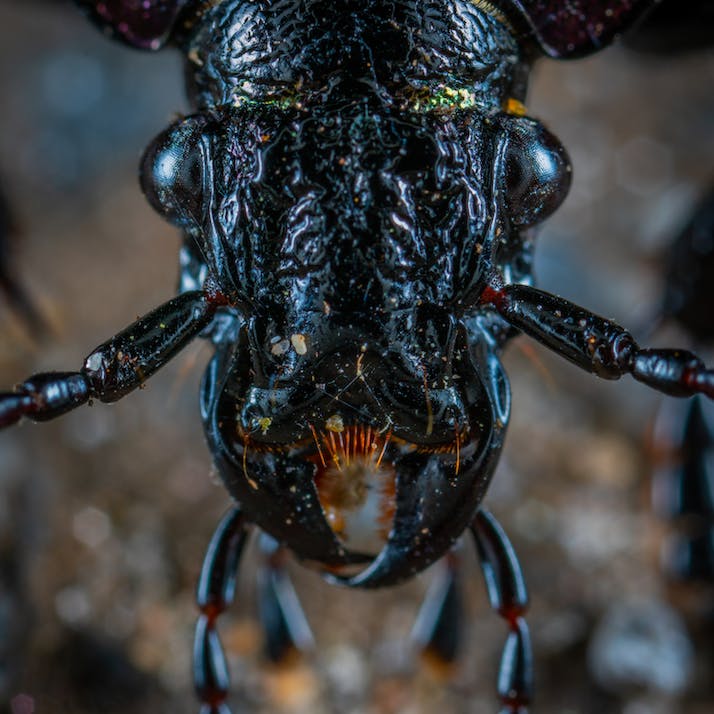 The Metamorphosis: How the Internet Helped Transform My Brother Into a White Supremacist

How do I maintain a relationship with someone who thinks I’m inherently deserving of predation and disrespect?

“When Gregor Samsa woke up one morning from unsettling dreams, he found himself changed in his bed into a monstrous vermin." Franz Kafka’s The Metamorphosis is about a young salesman who finds he’s been transformed overnight into a giant insect, or “monstrous vermin,” to translate the German word “Ungeziefer.”

Throughout the novel, Gregor hides in his room, afraid of terrifying those closest to him. Though he grows to enjoy his new body, scurrying up walls and along ceilings, he soon overhears his family discussing its financial troubles. Grete, his sister, is supposed to go to a music conservatory, but Gregor’s burdensome form prevents her from attending, and she resents caring for him. At one point, Gregor’s father wishes his son would leave so the family could avoid ruin. Eventually, in the darkness of his room, Gregor eventually dies. It’s a heartbreaking story.

Kafka never explains why poor Gregor turns into a cockroach-like pest, but it’s been on my mind over the years as I’ve watched my own brother, my former best friend, become someone unrecognizable. In the span of three years, he’d transformed into his own kind of scary creature: a misogynistic, white supremacist.

My Brother Always Used to Include Me

Two years ago, at my master’s commencement ceremony, our speaker asked us to applaud everyone who helped us on our journey. He gave a shout out to his brother, who “always provided needed comic relief.” I turned and smiled at my spouse and parents, and they beamed at me from their seats.

My own brother, however, wasn’t there.

Are you sitting there wondering how my brother went from being my funny and compassionate best friend to being that guy? Yeah, me too.

He was the best big brother when we were younger. He never picked on me or hurt me on purpose. He included me when his friends came over to play. Together, we played “explorers” in a nearby creek, searching for mythical creatures. He walked me home from school and we battled on the N64 in MarioKart and Super Smash Bros. His great reputation paved the way for me throughout school, as teachers knew me as the younger sibling of a star student. In high school, I was a lucky freshman because my big brother drove me to school every day in our ancient Toyota Tacoma. He was always a little socially awkward, but he used to have friends who shared his quirky interests.

It was hard when he went to college halfway across the country, but we kept up with regular hours-long phone calls. I don’t know if something happened during those years—if some event in college, which he never revealed, influenced his later adult years. Maybe I’m just trying to rationalize irrationality. But I’ve looked back to see what went wrong.

I Realized I Lost Him

At first, it was his growing social discomfort that worried me. When we went on family vacations as adults, my brother brought his desktop computer and spent all his time in his room, door shut. On holidays, he started to avoid talking to relatives—a huge change from when we were younger.

His metamorphosis was in progress at least three years ago. At a party one summer, my friend asked about his life, and he said he was examining different views. I acknowledged this was good, as many people live in echo chambers. But he failed to mention that he was learning opinions from Red Pill Reddit, men’s rights activist sites and YouTube, adopting the opinion that feminists, immigrants and single moms were causing the downfall of Western society, which, in his view, is the apex of humanity.

According to him, our culture is doomed to be changed by others. He sees immigration patterns across the globe as threatening and thinks Canada’s humanitarian approach to immigration is a “canary in a coal mine,” exposing America going down the wrong road. He focuses on Muslim individuals who commit violent crime in the U.K. But he says he’s not racist. No, racism, he believes, is when the left oppresses those with different opinions. He conflates the consequences of repulsive behavior with oppression. Anytime someone is outed as a white supremacist and an employer cuts ties with that person, my brother cries, “Oppression!”

Then, the Aziz Ansari story broke. In response to an op-ed sympathizing with the victim, my brother emailed dozens of YouTube videos railing against Islam and immigrants, with a diatribe about how weak and cowardly women are. He said if we want to “exist in the world of men, we’re going to have to earn things like men.” Respect must be earned, he said.

I won’t detail how wrong he is. I’ve argued with him extensively and described what it’s like living as a victim of sexual assault, and the exhausting survival skills I’ve honed. I’ve explained how what I want is to be seen as a person first, to thrive in my own body, capacity and truth of who I am, and that it shouldn’t be contingent on anyone else. I asked if he’s ever met a Muslim person. When he didn’t have prepared talking points, he just sat and shook with rage.

When I once expressed that I’d have an abortion under certain circumstances, he screamed that I was selfish for putting my life first. When I started a sentence with “Speaking as an actual pregnant person," he screamed: “I don’t give a fuck what the pregnant person says!” He continued shouting until my spouse suggested that if he had to choose between a life-threatening pregnancy and me, he’d choose me every time.

This apparently never occurred to my brother, who said, “Oh,” and fell silent. At that moment, I realized how little I meant as a human to him. My life, dreams, health, family, decision-making—these were all less important than a hypothetical fetus, and my husband’s wishes.

That day, I realized I’d lost him for good. I cried for a long time, and then spent years being angry and hurt. I’ve cycled through trying to help him, then being angry with myself for wasting my time.

I’m Not Sure if I Should Keep Trying

He and I were raised to respect each other’s opinions. Both my liberal parents come from politically mixed families that believed a political disagreement meant agreeing on a problem, not a solution.

But this is different. There are those, like me, who think every human is worthy of dignity and respect, and then others, like my brother, who think white men are inherently better than everyone else, and that rights must be violently taken because that’s how men, and therefore the world, work (disclaimer: not true).

How do you talk to someone who thinks only he understands the “truth?” How can I keep company with someone who thinks I’m inherently deserving of predation and disrespect, and that I am less intelligent, important and capable? There aren’t resources on what to do when your sibling’s been brainwashed by the alt-right. I want to have a normal conversation with him, but he only talks about his vile ideas.

How do I balance the belief that I would never want my sibling to give up on me, with the desire to cut him off completely? How did Grete Samsa feel? Frustration, then shame at being frustrated? Hopeful and angry?

I recently realized I’ve experienced a traumatic response in his presence. I’m tired of hurting, and seeing my parents hurt. They’re close to retirement and will probably spend the rest of their lives worrying about their son. Maybe you know someone like this. I’m sorry. You probably wonder what the hell happened. Maybe you’re angry, disgusted and heartbroken. I’m sorry you’ve lost that person, and that you try and catch glimpses of them in their rage-filled shell.

We can’t change others, only ourselves. What’s not clear is how I should change in response to his metamorphosis. There aren’t guidelines or studies for this, just hurt and confused people who miss the person they once knew. If you figure it out, please share with the class. Honestly, I’d prefer a giant but amiable cockroach.