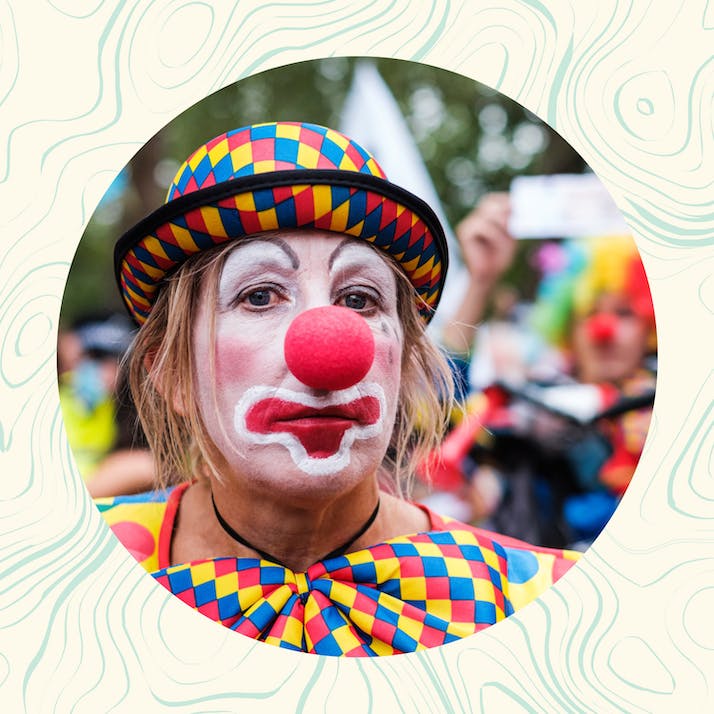 Inside the U.N.'s Climate Show Circus

A United Nations-credentialed reporter reflects on the hypocrisy of non-governmental leaders spreading fear about the climate crisis.

The first thing I noticed outside the metro station, other than the bone-chilling cold, was the ridiculous giant bunny begging me not to eat him or his friends. He was so cute, and yet so pitiful and so preposterous all at the same time. How could anyone eat anything that cute, even if it was delicious and nutritious? And why in the world were all these smelly hippies shrieking at us about “revolution”? And what in the heck did any of this freak-show outside have to do with the supposed solving of alleged man-made “climate change” going on inside, anyway?

It felt like an insane acid trip. But it was very real. And you are paying for it all.

My colleagues and I were on our way into the 25th United Nations Conference on the Parties, better known as the U.N. COP25 in Madrid. Just like the last 24 times they gathered, its members were developing a plan that would supposedly save the world from this horrible toxic pollution known as carbon dioxide—a “pollution” that is literally exhaled in large quantities by every single person on the planet, every single day, and is necessary to all plant life on earth.

It was quite an “ambitious” agenda, to use the language of the U.N.'s confab. While it sounded so noble to the uninitiated, I couldn't stop thinking about Pinky and the Brain, the infamous genetically engineered cartoon lab mice who, each episode, “try to take over the world.”

Of course, the hippies and the vegan lady in the bunny suit were at our entryway. That entrance is for the humble proletariat—all the tax-funded rent-a-mobs, the cheerleading squad (they prefer to be called journalists), and the legions of lower-level bureaucrats and servants who make the summits happen.

The VVIPs you see on the news—also known as “Very, Very Important Persons”— have their special own entrance reserved just for them, no riffraff allowed. That way, when they get off their gas-guzzling private jets and step out of their fancy limos and helicopters, they don’t have to go past the cute bunnies or the hippies shrieking at the plebs.

“”
It felt like an insane acid trip. But it was very real. And you are paying for it all.

Most of the Conference Was Spent Complaining About Trump

This was only my most recent adventure at one of these U.N. climate summits, which I've been attending since 2009 in exotic locations all over the world as a U.N.-credentialed reporter.

If the average American could see what I have seen, or experience what I have experienced, the “climate crisis” would have been solved years ago. Indeed, the scam artists behind the whole thing would have been run out of town and probably tarred and feathered. To call the U.N. summits a clown show is a terrible insult to clowns everywhere.

The U.N. climate extravaganzas are always weird and uncomfortable, especially for an American. But the one in Madrid—it moved there from Santiago at the last second after the communist revolution in Chile got too hot too quick—was especially outrageous.

If an alien had shown up from outer space to find out what world leaders were doing at this COP25 conference, they would have likely concluded that they were having a billion-dollar, two-minutes-of-hate session to rage against U.S. President Donald Trump and the horrible, fat, evil, racist, fascist, polluting basket of deplorables who elected him.

It seemed like every speaker spent most of their time whining about how evil Trump and America were. The sideshows put on by tax-funded “non-government organizations” were doing the same thing. And the propagandists posing as journalists were, too.

Even the Americans, like current climate czar John Kerry, a man who flew in a private jet to Iceland to receive a climate leadership award and defended the PR fail by claiming that private jets were “the only choice for someone like me,” could only speak of how horrible Trump and America were.

Much of the rest of the event was babbling about how there were just too many plebs for the planet to sustain. One burned-out hippie, the producer of what he claimed was the top documentary in human history, got to speak at least a few times on key stages about how there needed to be fewer people and especially fewer Swedes.

Being married to a Swede, naturally, this anti-Swedish racism piqued my curiosity. “Don't have children—and I'm looking at you white men,” said the old white guy. Billionaire CNN founder Ted Turner told me something similar in Rio De Janeiro in Brazil at the U.N. Sustainable Development conference in 2012. He has five kids. But then, he's not a pleb.

Speaking of hypocrisy, at the Madrid summit, my team and I ran into former New York City overlord Mike Bloomberg as well. Naturally, the man was surrounded by at least three heavily armed bodyguards. And obviously, he came in one of his private jets, too—quite a sacrifice to leave behind his CO2-spewing helicopters, yachts, mansions and more to save the planet for us plebs by forcing us to use windmills and bicycles—if we're lucky! Bloomberg even agreed to take his picture with me, until his handlers growled, demanded to know who I was. They whisked him away.

Another semi-VVIP I ran into at a U.N. climate summit (this one in 2009) was Maldives President Mohamed Nasheed. He had been blabbering about how his nation was going to sink under the waves unless the world did what the U.N. was demanding right now. Apparently, “science” had spoken, and it was not for us to question, only submit.

Interestingly, one of the key sea-level scientists for the U.N. Intergovernmental Panel on Climate Change (IPCC), a Swedish geophysicist named Nils-Axel Mörner, had been measuring sea-levels in Nasheed's part of the world for five decades. His findings suggested that sea levels were not only not rising, but they may also even be declining.

Obviously, I asked Nasheed about this. Boy, was he angry. With the blood vessels almost popping out of his eyes, he claimed Mörner—again, a scientist who worked on the U.N. IPCC, supposedly the top authority on The Science™—was not “worthy” of a response. Then he proceeded to claim to me, falsely, that the pope had killed Galileo.

U.S. diplomatic cables exposed by Wikileaks later proved that the U.S. government was offering big money to the regime in the Maldives to build a deeper harbor—something that made no sense if the nation was truly about to be swallowed up by the sea—if they would play along with the climate hysteria and support the U.N. deal. Nasheed was later convicted under anti-terrorism charges in his home country, though the top court finally overturned the conviction in 2018.

The silly rhetoric is typical, though. At that same U.N. climate summit in Copenhagen, I got to hear Saint Al Gore, who had just arrived on a CO2-belching private jet, lecture us about how “the entire polar ice cap…could be completely ice-free within the next five to seven years.” He cited models that claimed there was a 75 percent chance of this occurring.

It sounded scary and made for terrifying click-bait headlines. But of course, five years came and went. Then seven. Then ten. And yet, the polar ice cap never became ice-free—not even close. Meanwhile, according to NASA, there is massive ice growth in the Antarctic that is causing a net decrease in global sea levels. But don't tell Nasheed.

“”
It would be easy to fill a book with all the crazy stories I’ve heard from these clown shows.

It would be easy to fill a book with all the crazy stories I’ve heard from these clown shows. In Cancun, the clowns opened the COP with a prayer to the Mayan goddess of creativity without mentioning her association with cannibalism and human sacrifice. Yes, seriously.

After that, pranksters from an American grassroots organization managed to dupe almost every U.N. delegate that was asked into signing a petition to ban a dangerous substance known as Dihydrogen Monoxide. The chemical kills thousands each year and is a major component of acid rain, they were informed. They literally supported a petition to ban water. But you can trust them—they're the experts following The Science™.

The adventures of Lord Christopher Monckton, who I've gotten to know pretty well, have been priceless, too. In 2012, the British aristocrat impersonated a delegate from Burma and spoke to the whole U.N. plenary session about how the so-called science behind the man-made warming hypothesis needed to be investigated. The year before, he jumped out of a plane in Durban to prove the sky was not falling.

At an earlier U.N. summit, filmmaker Phelim McAleer dressed up in a polar bear suit and went hunting for the disgraced “scientist” at the center of “ClimateGate,” the scandal involving hacked emails that broke out shortly before the summit. The tax-funded legions at the summit seeking more climate loot were not amused.

And who could forget the Gore Effect—a mysterious phenomenon I have personally witnessed numerous times in my career—involving snowfall at U.N. climate summits starting as soon as Gore's private jet lands in town.

We’re Losing Billions of Dollars So U.N. Fat Cats Can Travel the World

Full disclosure, in case you have not realized by now: I think the U.N.-backed hypothesis that man's emissions of CO2 are driving global warming—I mean, “climate change,” or is it “climate crisis” now?— is just as silly as the crazy man-made “global cooling” hypotheses peddled in the 1970s. Ironically, it was often the very same fanatics and propaganda organs disguised as news outlets now trumpeting the alleged man-made warming. And no matter how hard they try to deny reality on Wikipedia, the evidence is there for all to see.

Going to these U.N. climate summits for over a decade makes it clear that even our would-be overlords peddling the man-made warming hypothesis do not believe it. If they did, why would they show up in fleets of private jets? And why would they try to drastically cut American CO2 emissions while shifting all of the economic activity to China, where the regime is building coal-fired power plants faster than we can count them, and where CO2 levels per unit of output will be drastically higher than in the United States?

Something doesn't smell right. I wish you could smell it yourself.

Don't get me wrong—I love the environment, and you should, too. But nations squandering billions on this non-issue so U.N. fat cats can travel the world and party at our expense is grotesque, especially while real pollution, needing real solutions, goes unaddressed in China and other nations conducting the crazy climate clown circus.