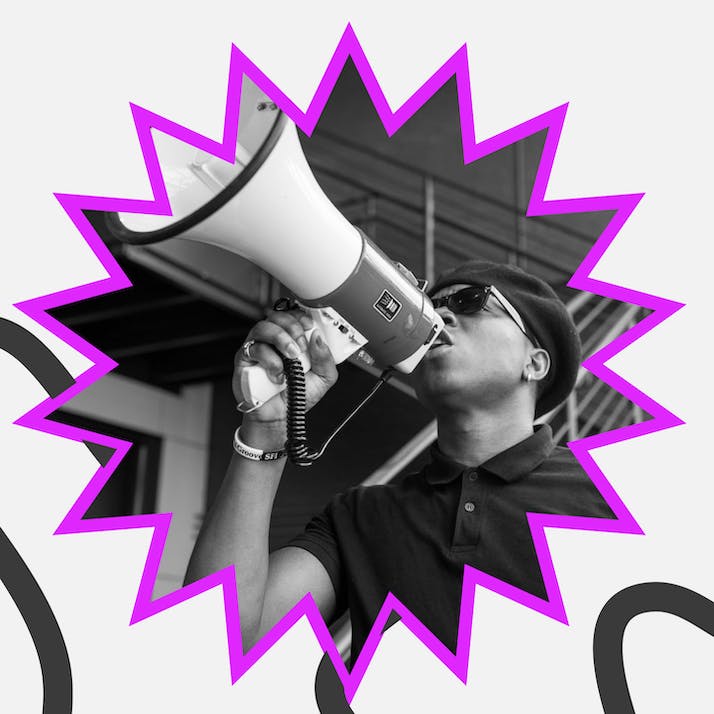 Inside the Battle for Unions in Media

As a comedy writer on a grinding Bravo reality show, I had to speak up and ask for reasonable change.

If you were to ask me, a comedy writer, about the last place I could see myself ending up, I would confidently answer, “Sitting on the carpeted steps of the Stamford Town Center mall in Stamford, Connecticut, asking the showrunner and executive producer of the series I was writing on to let us unionize our writing staff, while casually sipping a stale Starbucks latte.”

That is not a scene on anyone’s vision board, but there I was. Up to that moment, I had been writing on a reality dating television show for NBCUniversal/Bravo in the summer of 2019 for over four months. All five of the show’s writers, along with much of the other production staff, were commuting from New York City on the Metro-North train line, two hours each way, five days a week.

We were beyond burnt out.

This hellish commute was excruciating at the time; it’s even harder (and extremely laughable) to picture considering our not quite post-pandemic world. But remember in 2019, there was no Zoom or “don’t worry, just work from home” reality. And despite reality TV’s reputation for being light, empty and easy, working in it is the exact opposite of that.

We were expected to be in the Stamford office as long as needed, and our presence was requested even when we didn’t need to be there, which meant staying until 10 p.m. some nights. (If you do the math, that means we’d be getting back to Brooklyn around 12 a.m.) And what’s going on in Stamford at 10 p.m. on a Tuesday? Oh, nothing, mostly just sadness.

The good news was that our small but mighty writing staff bonded from the jump, as though we knew we were at war together. And we had to stick together because we received endless notes from the Bravo executives that were laden with deep, thought-provoking sentiments like, “Not funny,” and, “Delete now,” and, “Her ass looks great.”

After four months of this, we’d had enough. I had written on a union show for a few months the previous year so I was a member of the Writers Guild of America, an organization built on a foundation of securing fair working conditions and substantial compensation for its members. The Stamford show was non-union, which meant we had none of these protections.

The difference between writing on a union show versus a non-union show is potentially life-changing. Union shows provide a higher standard weekly rate and healthcare, and you become eligible for the holy grail of the entertainment industry: residuals. To put it into context, I have friends who write for The Daily Show who make well over $100,000 a year alone in residuals.

The line between a show being union or non-union is nebulous and often doesn’t make sense. The reason NBCUniversal didn’t have to recognize us as union writers was because, under our contract, we were known as “comedy producers,” even though all we did was write—including literally writing text jokes that were on screen. But this “comedy producer” loophole is a very common way multibillion-dollar companies skirt union rules so they don’t have to pay the big bucks, which, let’s be honest, are really small bucks for them. I mean, they’re NBC-fucking-Universal.

“”
Our small but mighty writing staff bonded from the jump, as though we knew we were at war together.

We Had to Get Approval for Our Union

After consulting with the good people at the Writers Guild, they wholeheartedly agreed that our show should be unionized and all we would need was the endorsement of both our showrunner and our executive producer to make a full union push. If NBCUniversal declined our demands, we would strike, raise hell on Twitter and hopefully shake the shit out of the Stamford locals, all 12 of them.

The only catch was the show we had been writing on had been struggling to get approved by Bravo and had gone through numerous iterations and revisions. It got so bad that halfway through my time there, NBCUniversal brought in two hired guns from Los Angeles to save the show. They were seasoned pros from the nonfiction TV world and had little backstory of the less-than-ideal working conditions of the show.

These were the same two people that we had to now ask to give us full union approval, which put them in a seriously precarious situation. They were brought in to save the show, shrink the budgets and literally get shit done ASAP, but now the entire writing staff was asking for union recognition and a substantial raise.

The Writers Guild informed me that in order to unionize, we had to ask all of the writers, the executive producer and showrunner to leave the office and hold a meeting outside of the workplace premises. It was a dreary, gray day in Stamford, which is almost every day in Stamford, so we couldn’t meet outside. The only option was the Stamford mall, which was basically one big, sad Hot Topic.

We wanted to talk in the mall’s Starbucks, but that was too crowded, so our only option was sitting on lightly carpeted steps in the open for the whole world to see. Since I was the one who led the campaign, it was my job to bring it up and kick off the meeting.

My Unionization Attempt Ignited a Passion for the Movement

I had a notebook with a list of justifications and demands as to why the show should be unionized, but I couldn’t really read my own handwriting, which made me wonder why I wrote anything down in the first place. I explained our rationale: All we do is write and put in 12-hour days; it’s a show that will air daily on Bravo and NBCUniversal is a massive company. They both listened intently and quietly, and then simply said, “No.”

They explained that they agreed with us on paper, but it would be extremely difficult to get this deal done now. They promised to revisit this if there was a season two. Spoiler alert: The first thing to go in a worldwide pandemic was a reality dating show where the daters sit on each other’s laps in a hot tub.

So there was no season two, but ever since our failed unionizing attempt, I have been more than encouraged by the incredible and successful drives for fairness and unions in the workplace. In March of 2021, the writers of the ABC quiz show The Chase went on a strike for the exact same recognition that we were seeking, and nearly two weeks later, they had a deal.

In the fall of 2021, members of the International Alliance of Theatrical Stage Employees, or IATSE, threatened to go on strike if their demands for better workplace conditions weren’t met. These were many of the same crew members that worked on our reality show and were simply asking for marginal improvements, like 54 hours of rest over the weekend, increased health and pension funding and a 10-hour turnaround between shifts. Hollywood finally took them seriously after several workplace horror stories surfaced on Instagram, and the union ratified their agreement in November of 2021.

“”
Progress often means taking a big swing and missing, only so the next person in line can have it a little easier.

The pro-union sentiment has continued to sweep the media and entertainment landscape. Last December, the union members at Wirecutter struck a deal with The New York Times Company for a three percent increase in wages every year. The media company Vice also reached a landmark union deal with the Writers Guild of America, East last December, and the Guild is in full-court press mode to renew their union contract with Slate.

And the pro-worker sentiment hasn’t just been limited to the media industry. According to Vice, workers have been striking at Kellogg’s, John Deere and most shockingly, a Starbucks in Buffalo, New York, which ultimately became the first-ever unionized Starbucks location. This is particularly encouraging considering all the anti-union tactics these massive companies employ, like spying and sending out-of-town managers into the store to discourage unionization.

With this historic union news, I can’t help but feel that if our show would have tried to unionize today, we’d get a contract immediately. But I don’t look at our union effort as a failure. Progress often means taking a big swing and missing, only so the next person in line can have it a little easier in their effort for fairness.

We stand on the shoulders of all of those who have fought and put their lives on the line for a 40-hour workweek, minimum wage and overtime. And there is no other effort or movement I would rather be a part of, even if it takes place in Stamford.