Inside the Al-Shabab Terrorist Group 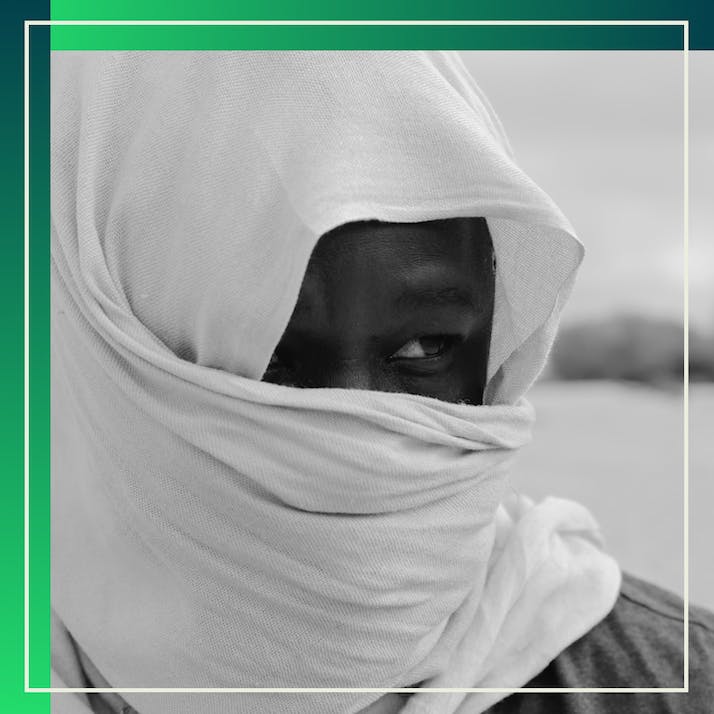 Inside the Al-Shabab Terrorist Group

I was lured into a Somalian Islamist organization and aided in atrocious things. I live with regret every day.

The following is a Doe exclusive: A recollection from a former terrorist's point-of-view, as interviewed by a Kenyan journalist.

In 2008, I completed my secondary education. My plan was to join one of Kenya’s security agencies to better assist my northern Kenya community in fighting insecurity and terrorism. But when I visited my rural home in a remote village in Garissa, I found the whole village in a state of mourning.

Armed bandits had recently attacked, ransacked local shops and killed four people. Insecurity was a way of life here, and my visit coincided with another brutal and violent act. After staying in the village for a while, I started desperately looking for a job to sustain myself and also to care for my poor parents and young siblings.

Social expectations forced me to approach all kinds of contacts who might assist me in getting a job of any kind. I remember meeting many people; however, one contact I met in 2009 was an agent of doom and the key person who lured and recruited me into the al-Shabab terror group against my wishes.

How I Was Forced to Join a Terrorist Organization

The al-Shabab recruiter passed as a very generous person—he used to offer people free tea, bottled water, food and khat, a recreational drug very popular among the youth in northern Kenya. With time, I got addicted to khat, and with social responsibilities pressuring me, I made the ultimate wrong decision.

The recruiter employed me to supervise his livestock buying-and-selling business by taking care of his large cattle herd, maintaining weekly livestock sales reports, offering veterinary services and releasing sold livestock to buyers. We mostly grazed the livestock near Boni forest in Lamu County.

One day, after six months of joining the livestock trade business, a group of bearded men approached me and said they needed 20 bulls. I processed their request, and they paid $10,000 in cash. One recruiter brought 30 other youths from other parts of the country to supplement his livestock business work and activities. Unbeknownst to me, the livestock business was this recruiter’s front.

One day, in 2010, armed men attacked our Boni forest ranch. Immediately after the attack, we were blindfolded and led through the dense trees before we reached a makeshift camp harboring many al-Shabab fighters and Muslim imams and sheikhs. “You are now in al-Shabab territory and control, and you will join mujahideen forces and assist our brothers and sisters in liberating Somalia, which is under the invasion of the AMISOM forces,” one of the sheikhs told us.

After joining al-Shabab, I was shocked by their intelligence-gathering prowess, as they knew the names of all my siblings, parents and close friends in Garissa. They also knew the secondary school I attended and the final results I obtained during my Kenyan national secondary examination. They even knew the names of my secondary school teachers and the subjects they taught me. The same happened to other captors and my fellow workmates.

“”
I was brainwashed and committed these acts out of fear of being branded a traitor or spy.

I Quickly Became an Instructor to New Recruits

I surrendered to fate in May of 2010, when I realized that I would either die in terrorist combat or through a suicide bombing. This was the day I closed my eyes and made a silent prayer, pitying my siblings and parents, who had put all their expectations in me and were waiting for monthly subsistence from my earnings from the livestock trade. I had sent them money for a few months before we were abducted.

After joining al-Shabab, we received sophisticated military training and tactics. I received map-reading and bomb-making skills and then I was deployed to Kismayo, an area of the Gedo region in Somalia. I soon joined an elite al-Shabab unit that was controlling both land and sea routes in Kismayo, Somalia’s third-largest town.

In Kismayo, I learned how to undertake surveillance missions on targets, how to cover targets before and after attacks and how to protect militants while they undertook their attack missions. By the end of 2010, I was appointed the head of my al-Shabab unit, charged with the role of ferrying recruited youths from Kenya and Uganda into Somalia, while operating in the Dobley, Tabda, Bilis Qooqaani and Kolbiyo areas on the Somalia-Kenya border. I did this work until April of 2011.

However, in June, my mandate changed, and I was instructed to join the al-Shabab network of cells, a secretive al-Shabab wing located in Kenya, where I was smuggled through the Kenyan village of Fino in Mandera before I was ferried to the town of El Wak. From El Wak, I traveled to Moyale before I was taken to Nairobi, where I met several al-Shabab cell members and stayed there through September. In Nairobi, I trained other al-Shabab members on surveillance and bomb-making and also personally performed numerous surveillance missions.

Under the watch of al-Shabab agents, who had instructions to eliminate me if I showed any signs of betraying the Islamist group, I had no option to stop the training. Though making the bombs wasn’t difficult, I always was fearful that the ones I made for training purposes would explode and kill or injure me. All of this, combined with being smuggled to various outposts, was grueling and harrowing.

I Supplied Somalian Communities With Bombs and Weapons Out of Fear

Toward the end of September 2011, al-Shabab’s al-Aminiyat intelligence unit got information that Kenya was planning to invade Somalia and flush the militants out of Kismayo, their operational capital, with the aim of building a buffer zone there. The invasion plan was triggered by intelligence reports which linked al-Shabab to the abduction of tourists from the Kenyan coastal town of Lamu.

I was ordered to leave Kenya and join my former elite al-Shabab squad in order to repel the invading Kenyan armed forces. True to al-Shabab’s intelligence report, Kenya invaded the Gedo region of Somalia bordering Kenya, leading to a fierce battle. I joined other al-Shabab fighters in planting roadside bombs, training local communities on how to make bombs and how to plant and detonate IEDs.

We fought off Kenyan forces in Tabda before they killed half of our al-Shabab squad. I escaped toward the Boni forest and rejoined the al-Shabab unit that was operating near the Ras Kamboni area. Because Kenya had flushed al-Shabab out of their Kismayo base, we then decided to focus our attacks inside Kenya. I supplemented al-Shabab cells in Mandera and armed local groups with weapons and combat training. I was also charged with the responsibility of coordinating chaos and killing non-Muslims in the predominantly Muslim-populated northern Kenya region.

At this point, I was brainwashed and committed these acts out of fear of being branded a traitor or spy for Western or Kenyan agencies. al-Shabab’s propaganda team also energized my efforts to support and teach skills to those fighting the invading Kenyan forces, who we were trained to believe were infidels, invaders and crusaders trying to weaken Islam and loot Somalia of its natural resources.

I Aided the Al-Shabab Terrorists in Two Deadly Attacks

I remember participating in many terror attacks, and two major incidents will remain etched in my memory forever. One is the Garissa University College attack, where al-Shabab fighters stormed the university before killing 142 students, all of them Christians. I played a key role in the attack, as I ferried the attackers, coordinated funds transfers for the attack and identified operational bases for the attack.

The second attack I participated in was when al-Shabab fighters commandeered a bus driving through the Mandera-Nairobi route and ordered all the passengers out of the vehicle. They were profiled according to their religion and separated according to their faith before all the 43 non-Muslim passengers were ordered to say their last prayers and were killed. One non-Muslim passenger escaped the al-Shabab killing squad, and we tried to track him down in vain.

After the bus attack, I was transferred to the Somalia-Kenya border and was responsible for smuggling contraband goods into Kenya. Apart from consumable goods like sugar, rice, electronics and other imported products that came from Somalia through the Kismayo port, I also smuggled arms destined to warring northern Kenyan nomadic communities.

During my active days at al-Shabab, I felt no remorse for these things, but now I’m filled with it. I realize just how much I played a role in killing thousands of innocent people. My journey is a painful one filled with many regrets and reflections, but in my desperation—my lack of a job, the pressure to sustain my siblings and parents—I was willing to join any venture that would give me some cash.

My aim wasn’t to join an Islamist group, and I never harbored any plan to attack or harm people. I became a pawn in the al-Shabab recruitment trap initiated by livestock traders who were really al-Shabab recruiters. My original aim was to join Kenyan security forces and bring peace and harmony amongst rival communities inhabiting northern Kenya, but I was turned into a monster by the recruiters.

“”
I realize just how much I played a role in killing thousands of innocent people.

Years Later, I Live With Guilt and Hope to Publicly Apologize

In October of 2013, I was ordered to report to Sakow inside Somalia, which was a key al-Shabab operational base. Here, I witnessed the beheading of Kenyan al-Shabab fighters who were accused by al-Shabab al-Aminiyat intelligence unit of spying for Western countries. During this time, I was also questioned and detained for some days by the al-Shabab intelligence unit officials over my working relationship with my colleagues who were killed.

I was released after 10 days in detention and ordered to join an al-Shabab unit operating in Kolbiyo on the Somalia-Kenya border. The unit was charged with waging attacks and abducting aid workers and local nonprofit organization staff working in the Dadaab refugee camp, located in Garissa. After six months of operations on the Somalia-Kenya border areas of Kolbiyo and Amuma, I was tasked to undertake surveillance work and operations in the Dadaab refugee camp in April of 2014. I was supposed to stay in the camp for another four days to avoid movement detection, but I took advantage of the time to plan my escape from the grip of al-Shabab militias.

Today, as someone who was able to escape, I live with immense guilt. Innocent people’s blood is on my hands, and I don’t know how I can give families closure, other than seeking their forgiveness and admitting my involvement to them. I live in constant fear of being hunted by the al-Shabab intelligence unit. I also live in fear of the Kenyan security agency, which is still searching for escaped al-Shabab fighters. I knew the risks involved in escaping and abandoning the terror group, but I am no longer part of the killing machine—I don’t transfer bomb-making skills or assemble any new fighters, and I don’t offer special operations work. I move from village to village, town to town, changing my sleeping address twice a night just to be sure I am OK and safe from the hands of al-Shabab agents and Kenyan security.

I’m doing my best to educate and counsel some youth in danger of joining armed groups and al-Shabab, without telling them about my former ties. I’m ready to openly apologize to the families of victims through a radio announcement or social media, but only if I get assurance that I won’t be a victim of an extrajudicial killing or a forced disappearance. I beg God for forgiveness!