I Worked Undercover Inside a Slaughterhouse 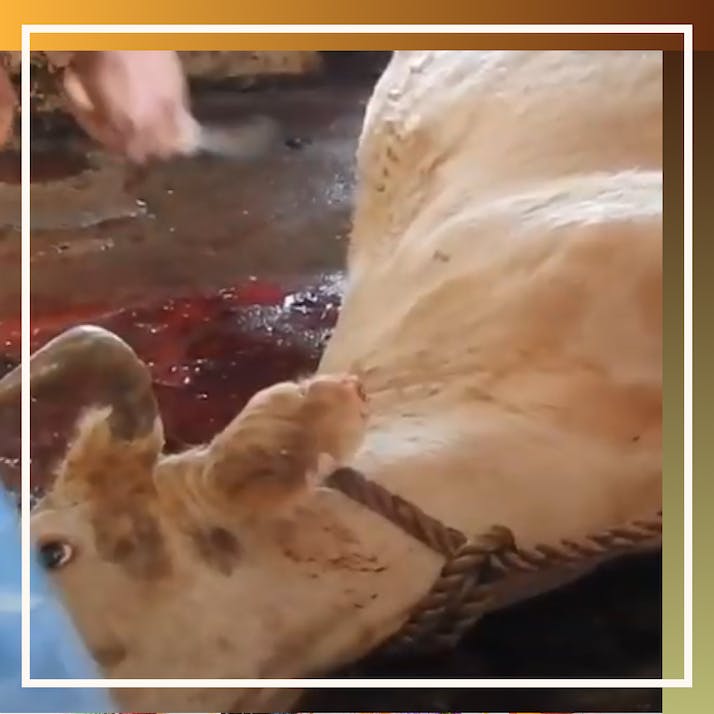 I Worked Undercover Inside a Slaughterhouse

A scathing look at the animal cruelty inside a slaughterhouse, from an investigator, vegan and activist.

“I can’t save any of them.” That’s what I reminded myself, day after day, as I looked upon the faces of the animals who would soon be slaughtered. “Just do what you came here to do,” I would add, locking my eyes forward to concentrate on the task at hand. There’s no time to stop and be sentimental.

Inside a slaughterhouse, there’s always work to be done.

During the years I was an undercover investigator, I worked at three slaughterhouses in three different states—on behalf of a national farmed animal protection organization. While working, I used hidden camera equipment to document the painful reality of what animals endure on the last day of their lives.

I often asked myself how I ended up where I was. Like a lot of people in the vegan movement, I would call myself an animal lover. When I was young, I only had a few career goals. After seeing Jurassic Park, I wanted to grow up and study reptiles. Then, after consuming copious comic books, I wanted to be a hero. I combined these goals and eventually earned a master's degree in ecology, with the goal of doing conservation research to protect wild animals. But, while I was in school, I learned about the suffering of farm animals through a labmate, the first vegan I ever knew in real life.

You probably guessed this already, but after a lengthy process, I became a vegan as well. Why wouldn’t I? Not only is meat production cruel, but it’s also notoriously bad for the environment, in terms of land use and emissions. So, it appealed to me as someone interested in conservation. In fact, I was so entranced with veganism and its benefits that I decided to keep my career options somewhat open. I wanted to either end up in field research or in activism. The non-profit I continue to work for today was the first to respond to my resume, which eventually brought me to those slaughterhouses.

I ended up working at chicken, pig and lamb slaughter facilities before I retired from fieldwork. I saw cruelty everywhere I went: some intentional and some as a result of companies trying to maximize speed (and, therefore, profits).

“”
At a slaughterhouse, there’s always work to be done.

My first job undercover was at the poultry plant, working live hang. Our one job was to pull chickens off a conveyor belt and wedge their legs in shackles passing by at eye-level. We were supposed to handle 24 chickens per minute, an impossible timeframe for anything even resembling “humane.” The birds would struggle; they would flap their wings or defecate out of fear, releasing feathers, blood and feces everywhere. The other workers seemed unconcerned with their plight. They would tear feathers off to throw at one another, or press the bodies of chickens against the metal conveyor belt in retaliation against their struggling. Sometimes, the workers at the head of the line would take a few steps back and hurl the birds at the shackles like they were baseballs. Often, the birds would successfully end up in the shackles after these pitches. It was easy to see that the workers had practiced this method.

“”
I saw cruelty everywhere I went.

My second position was at a slaughterhouse supplying a household name in pork products. I ended up working two different jobs there, one of which was on the kill floor. Part of the job was herding the animals through chutes and pens until they reached the stunner. Afraid and/or injured, sometimes they wouldn’t want to move—or simply couldn’t. And when the pigs weren’t moving, the workers started to become violent.

We had “rattle paddles,” which look like oars with the flat end filled with noise-making beads. Workers would raise these paddles above their heads and bring them down on the heads or bodies of pigs. Several times, I was admonished by others for not doing this. “Hit them! Hit them!” they would yell at me. We also had access to electrical prods, which other workers would use on animals multiple times, sometimes in the face or near the genitals. The sick ones would be pulled by their tails or shoved out of the pens. We were supposed to use a sled to do that, but a supervisor told me they just didn’t have the time.

When the animals got past the chutes, a worker would use an electrical stunner on them. The hogs would go rigid and fall down a slide to a conveyor belt below. There, a worker would cut their throats. If the cut wasn’t done correctly, the animal wouldn’t bleed out enough to kill them before the stunning wore off, so I documented several pigs returning to sensibility and attempting to right themselves while they were hanging upside down, bleeding from the gaping hole in their throats. Workers were supposed to stop the line to re-stun the animal, but in one instance I witnessed, they didn’t bother, leaving the animal to suffer as the shackle took him slowly towards tanks of scalding water. I remember a choice quote from one worker: “If USDA were around, they could shut us down.”

“”
The workers started to become violent.

My final investigation was at a slaughterhouse for one of the largest lamb producers in the U.S. I spent a few months working in a refrigerated room all day. The supervisor would tell workers to change the “best by” date labels on older products to falsify their freshness. He would help people avoid putting product through the metal detectors to save time, risking contamination of the meat with metal shavings. And when I finally got a position that would help me observe the slaughter process, we discovered that after having their throats cut open, 90 percent of the lambs would move in response to having their tails cut off later on the line, indicating they were potentially still sensible. What we saw was so egregious we decided to file a False Claims Act against the company, which resulted in a historic intervention from the Department of Justice, a settlement and mandated changes to their slaughtering practices.

“”
If USDA were around, they could shut us down.

Slaughterhouse practices don’t just cause suffering for the animals. Meatpacking plants are notoriously dangerous for workers, with two amputations occurring in the U.S. per week. Most of my jobs were basically assembly line jobs, with workers performing the same action hundreds or thousands of times per day. Injuries are common, especially those caused by the repetitive motions on the line. I remember my hands aching every minute while I was employed in live hang, my knuckles red from holding the bony legs of thousands of chickens.

In another job, I wore a back brace on top of another because I spent all day carrying boxes filled with lamb meat. I cut myself on knives and metal hangers at the pig plant. More than once, I cried in my car before a shift, anticipating the mental and physical anguish I would endure for the next 12 hours. (And, now, during the coronavirus pandemic many Americans are painfully aware of how disease can spread like wildfire inside of these facilities.)

Though all of that is behind me now, it is still the reality for the billions of animals who are slaughtered every year. While I’m retired from undercover work, I’m still very much an activist for animals. As part of my job, I work with footage from other investigators and witness the same cruelty I saw firsthand. But it’s worth it, because I want people to see what I saw, as hard as it can be to watch. Despite the efforts of investigators like myself, there are still so many people who have no idea where their “food” comes from, and what horrible atrocities they’re paying into by buying animal products. My hope is that everyone who is even a little curious about what I went through can take the time to watch some of the footage brought back from these facilities. As someone who was on the inside, I hope the reality of the plight reaches you.