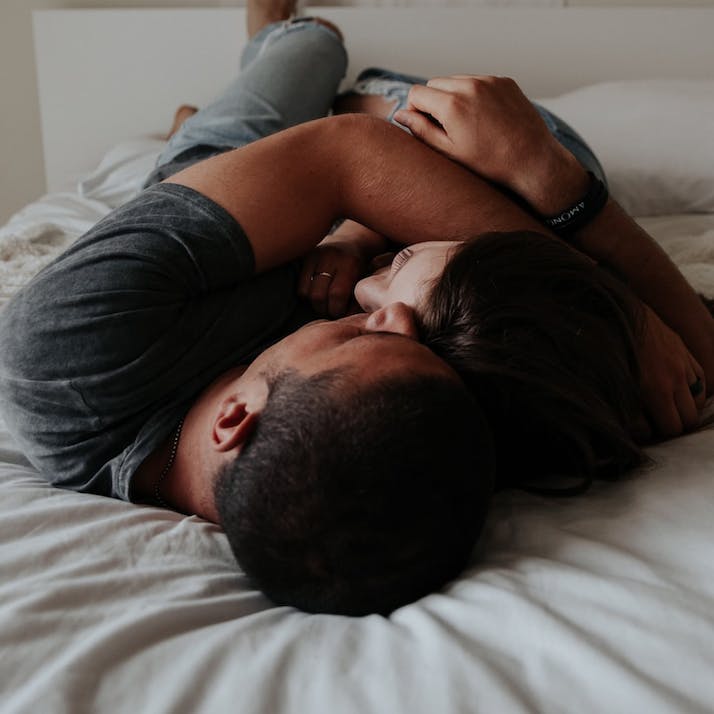 It’s been a year and a half since my partner and I have had sex, but we’re still happy together.

If you had a friend who said they hadn’t slept with their partner for 18 months but they were as happy as ever, would you believe them? Me neither.

Yet I am that friend. And my partner and I are as happy as ever.

After seven years together, my fiancée and I are very much in love and we still fancy each other now as much as when we first met. If not more (I asked her). We’re both physically active. We’re happy and we’re healthy. We have two young children. We live under the same roof. We share the same bed. It’s just that we haven’t had sex in it since July of 2019.

If I were you reading this, I’d probably be expecting a twist. “My partner and I have decided to take a vow of chastity to become more focused parents.” Or: “As a couple, we have just grown into friends and decided to platonically co-parent under the same sexless roof for the sake of the kids.” And I’d be wrong. (Actually, just wait there while I go and check that last one. Writer runs downstairs. Chats with fiancée. Fiancée kisses writer. Writer runs back upstairs. Yes, I’d be wrong.)

So why, then, are two people who are attracted to each other, and as in love as I am professing we are, not having sex?

Our Sex Life Resumed After Nurturing Our Firstborn

Our first child was born in July of 2017 and, as anyone who has kids knows, it changes everything. It’s the best thing but it’s a whole new act in life.

The first-time post-baby felt like losing my virginity all over again, except I had more of an idea what I was doing. I was nervous because I didn’t want my partner to feel any discomfort. Despite trying to understand, I have no idea what it feels like to be a woman; even less of an idea about how it feels to be a woman who has birthed a nine-pound child.

My partner was nervous, too. Despite actually knowing what it feels like to be a woman, this was going to be the first time she’d ever had sex after giving birth. We wanted our first time together after our baby to be special—candles flickering around the room, lilies draped off the silken-sheeted bed, soft music dancing on the waves of the breeze flowing in through the satin drapes, lightly veiling the views of the ocean outside our beach house paradise.

Of course, it was never going to be that. Instead, we were sharing a caravan on a rainy holiday with my partner’s sister and her husband. They ran over to the campsite shop—our son was having a short nap in the next room—and we quickly fumbled out of our pajamas. It may not have been soft-focus movie magic, but it was a moment we shared together: two devoted parents who were still one sexual couple.

We Stopped Having Sex After My Second Child Was Born

Our daughter was born in March of 2020. Healthy, happy and beautiful. Just like her mom. I fully expected everything to follow the same pattern as it had with our son. It didn’t. It hasn’t. But that’s OK. OK, I’ll come clean. I miss it. Of course, I do.

My partner is hot. Aside from the physical attraction, she is the love of my life. I enjoy sex with her. I love the intimacy, the feeling, the laughing and the togetherness of it. But it takes two not to tango and I would be lying if I said it’s not a little frustrating. This is the longest I have ever gone without having sex. And it’s hard. But this isn’t just about having sex. It’s about that closeness, and, yes, the horniness. Because who sees their partner for the first time and thinks, “Wow! I would love to not have sex with her one day?”

I don’t want to sound like I’m some high school jock who’s trash-talking in the locker room, and I am sorry if this sounds selfish. I hope by not putting pressure on my partner, I’m not being selfish. I don’t even know how long other couples go without sex. Fifteen months may be the norm. That said, Fif. Teen. Months!

To help with context, here are some things you may remember from July of 2019:

2) The world celebrated the 50th anniversary of the Apollo 11 moon landings.

What were you doing then? Having sex? Yeah, me too. What have you been doing since? Having sex? Well, there’s no need to show off.

“”
I suppose this situation can’t go on forever.

Sex Is on My Mind

The reason I am telling you now is because of how I’m telling you now. Anonymously. Aside from me and my partner, you’re the only other person who knows about this. There’s been no cliched “my partner doesn’t show me attention” chat with a lonely colleague or stranger, as there would be in the opening scenes of a Michael Douglas film. There’s no sleeping in separate rooms. It’s even become a stock joke between us: “Shall we have sex now, while the kids are watching Toy Story?” We laugh and shake our heads at the absurdity of such a suggestion. Then we’ll get on with whatever we’re doing before we put the kids to bed and decide what to watch on Netflix.

It’s on my mind. I have a soulmate and two healthy, happy children. We are in love and we are strong and we are happy. And I am lucky. But I suppose this situation can’t go on forever. It’s inevitable. I hope that we get to the bottom of it. Or any part of the anatomy for that matter.

So, if you do have a friend who tells you they haven’t slept with their partner for 18 months, but are as happy as ever, believe them. Just don’t talk about your own sex life. That’s cruel.