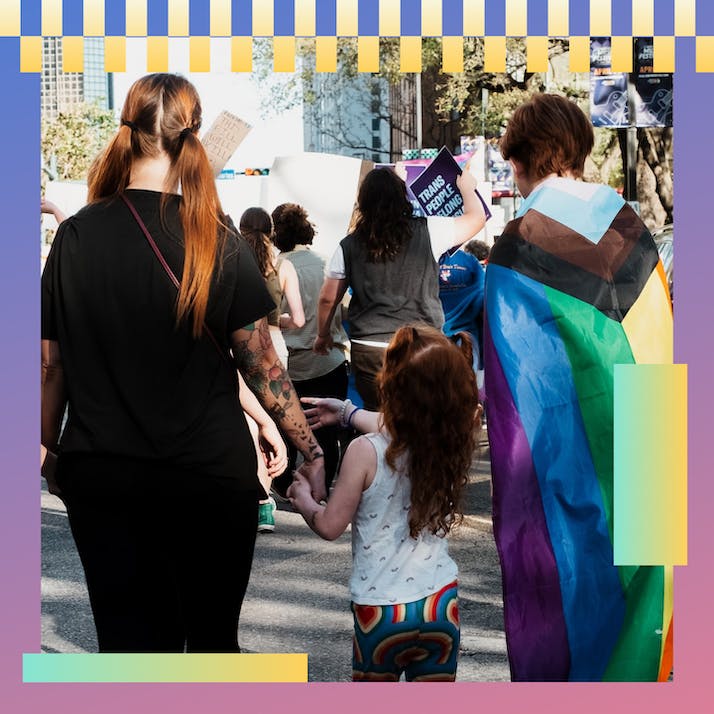 I'm Nonbinary—and So Is My Mom

My mom blazed a trail and showed me the way.

I’m not saying my mom invented being nonbinary. I’m just saying that she was saying stuff to my brother and me like, “I don’t feel like a woman or a man; I’m just your mom,” all the way back in the 1990s. So maybe it was her and like, David Bowie. But she was doing it before it was all the rage and before we had the language to describe it.

Growing up, I remember my mother always talking about her childhood and how different she was from me. She marveled at the way I wore dresses and played with makeup, how it came so naturally to me despite her never wearing either in her whole life, let alone around me. She would mention in passing how much she dreaded puberty as a child, how her budding breasts announced the truth to people, no matter how short her hair or how much she dressed like her older brother. My mother’s relationship to her gender revealed itself in her funny stories about trying to pee standing up as a kid, in her obliviousness to things my friends’ mothers would teach them about hair and clothes, in the way she only started shaving her legs when she realized her hair was embarrassing to her kids when at the public pool. Sometimes, it revealed itself matter of factly: “I don’t feel like a woman or a man; I’m just your mom.”

“”
So maybe it was her and like, David Bowie.

My Mother and I Came Out as Bisexual to Each Other

I’m not saying I invented bisexuality, but I will say my first kiss was with my neighbor when I was 3, and my second kiss was his older sister later that day. I knew I was queer basically as soon as I had cognizant thoughts. It always just felt inherent to human life. It wasn’t until I fell in love with my best friend in middle school that the fact it made me different really started to creep in. When my best friend fell in love with me back is when I knew it was time for me to do that whole “coming out” thing. There was something strange to me about coming out to my mom; like subconsciously, there was an understanding that queerness is simply the default. I was more nervous about coming out to my mom as a person who was regularly kissing another person than I was that I was queer.

“Mom,” I told her one day as she sat at her desk, “I have something to tell you.” She looked up from her computer at me, and as if someone was paying me to say the following words as fast as I could, I blurted out: “I’m bisexual, and I’m dating Alex.” Before she could say anything back to me, I ran to my room and hid under the covers, hoping that by the laws of you-can’t-see-me-if-I-can’t-see-you, she would simply leave me alone and never bring it up again.

There was a tap on my bedroom door, and a few moments later, a hand on my back through the blanket. Through a chuckle, as if it was obvious, she just assured me that she’s bisexual, too.

I’m not saying I’m so gay that the mere presence of my embryo’s DNA running through my mom’s veins turned her gay, but it is canon that the first time my mom fell in love with a woman was when she was pregnant with me. Or maybe that’s what turned me gay. (Given my mom’s underlying gender identity, who’s to say if her feelings for my dad weren’t actually gayer?)

The point is, we’re both gay, whether it’s the gay apple that doesn’t fall far from the gay tree or it’s the gay apple seed that turned the tree gay. The tree and apple weren’t done learning what they had in common, though. At 16, when I was chronically online, learning about sexuality and identity on Tumblr, I started coming to the dinner table with words like “intersectional feminism” and “gender spectrum,” lecturing my exceptionally progressive family about how backward and behind they were. My mom very graciously gave me space to be a condescending and bratty teenager, but her interest was piqued. Gender? A spectrum, you say? Not long after that, I began exploring what gender meant to me, personally. My boyfriend at the time and I started wearing each other’s clothes and doing each other’s makeup. Part of me felt punk for breaking all the rules, but another part of me felt the most lawful and legitimate I had ever felt. Like I was following a code inside of me I didn’t even know was there. My rejection of the binary looked and felt different than the not-woman-not-man-just-mom who raised me, but suddenly, it began to click that I, too, am a not-woman-not-man.

“”
I knew I was queer basically as soon as I had cognizant thoughts. It always just felt inherent to human life.

My Mother's Openness Allowed Me to Embrace My Sexual Identity

I'm not saying the internet made my mom and me trans. No, I'm actually not saying that. But what it did do was give us the language for what was living under the surface all along. Together, parallel to one another, we were two queer kids from different generations coming of age in our own ways. Without my mother always being open and bold enough to be herself and be honest about her experiences—regardless of the vocabulary available to her at the time—I may not have felt empowered to so comfortably and, without doubt, come into my own. And without my access to the new queer generation's fearless rhetoric and my dissemination of that discourse to my mother, she may never have felt empowered to claim and internalize her identity.

In the years that have followed, she has changed her name but not her pronouns. I have changed my pronouns but not my name. We both live unapologetically queer lives, and our nonbinary identities and how we express them physically may be different, but what remains the same is how we continue to see and understand each other in ways nobody else really can. “Pride” means something entirely different when you are lucky enough to know your queer lineage, and who you're proud of reaches beyond the limits of your own individual self. I'm proud of us.