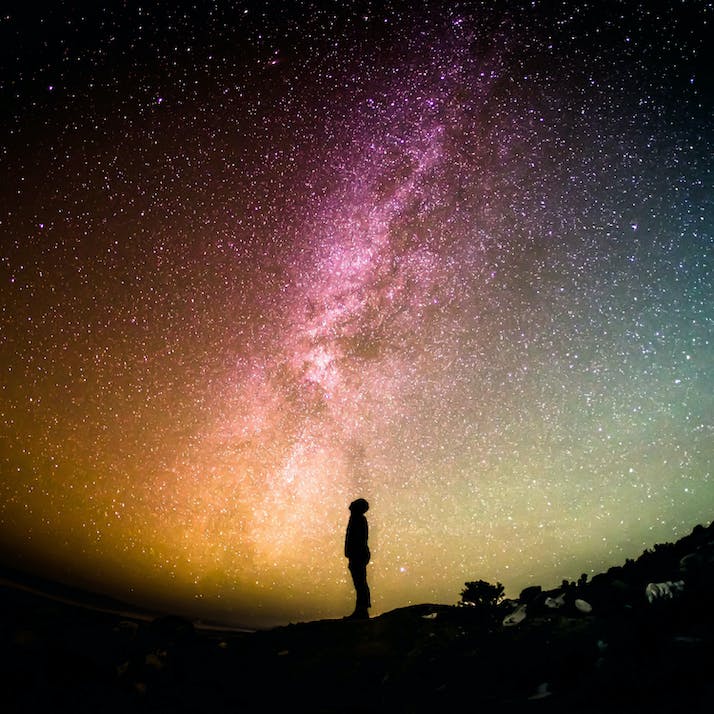 I Used to Want Religion Out of Government; Now I Want God Back In

A former atheist argues for a heavy dose of spirituality into American politics.

My adolescent intellectual enlightenment came from reading the "Four Horsemen" of aughts New Atheism: Christopher Hitchens, Daniel Dennett, Sam Harris and Richard Dawkins. Their books—combined with the reemergence of the American evangelical right and its power to twice elect a president who proudly said that his Christian God told him to start the war in Iraq—infuriated this 16-year-old liberal New Yorker. I remember thinking, very clearly, that religion, theism and faith, in general, were destroying our country.

Fifteen years later, with a president who’s a far greater existential threat to the world than George W. Bush ever was, I can't help but think that my younger self and most of my peers—atheists who want their government to function according to logic and reason deemed antithetical to capital "F" faith—had it all wrong. Personally, I still hover somewhere between agnostic and “spiritual,” but at this moment, as the sociopolitical fabric of America tears at the seams, I believe what this country needs most is God.

To be clear, when I say “God” I’m not referring to any specific religion’s popular conception of a higher power. I’m referring to faith in virtually any form of Alan Lightman’s shorthand definition: “A Being not restricted by the laws that govern matter and energy in the physical universe…outside matter and energy.”

My personal faith is probably closer to what Alan Watts used to lecture about, or the spiritual vision that pulled Tolstoy out of his decade of midlife suicidal ideation, or what Thomas Merton discovered on his Seven Storey Mountain. Put as simply as I can: We are walking, talking bags of “matter and energy,” opposable-thumbed collections of atoms and molecules that have just so happened to be arranged in a pattern that allows for the miracle of self-aware consciousness. God created us, but is, by definition, that which we are not. We are flesh; God is spirit. We are here; God is there.

I am embarrassed to admit it, but in my atheistic days, I didn’t vote.

This wasn’t a thoughtful decision, wasn’t a considered abstention from the political process, but more of a product of being a young person with zero sense of duty. I simply did not recognize myself as part of a system in any sense of that word. It wasn’t until my late twenties when I opened up to the concept of God, to the unknown and the unknowable, that I began to experience myself as a small piece of something greater, something infinitely complex. And once this sense of cosmic position shifted, I became engaged in politics for the first time in my life.

So, why do we need a belief in something outside matter and energy, outside of ourselves, in our politics and government? While Marianne Williamson should definitely not be president (and some quotes of hers actually make me think she’s just another daytime TV charlatan), there’s a reason why she had some success on the political stage. She framed our national crisis as a macro-spiritual one. Her most salient perspective is that: “We don’t just need a progressive politics or a conservative politics; we need a more deeply human politics. We need a politics of love. Love is the angel of our better nature, just as fear is the demon of the lower self. And it is love, not fear, that has made us great. When politics is used for loveless purposes, love and love alone can override it. It was love that abolished slavery, it was love that gave women suffrage, it was love that established civil rights, and it is love that we need now.” (Worth noting: these three benchmark victories for American freedom were the result of love, and decades of grunt work, from organized church groups.)

Williamson’s “love” is really just a secular synonym for God anyway, and God is really just an umbrella term I’m liberally using for a collective faith that might spark what this country so desperately needs: an epic collective humbling, a great national softening, a universal realization of our inherent oneness. This might make it sound like I am against the separation of church and state, or that I’m arguing for some kind of hippie version of religious nationalism, or that I’m endorsing some traditions over others, but all I’m really saying is that America has lost its soul. The good news is there’s a pretty tried and true way of getting it back.

State of the UnionHigher Power