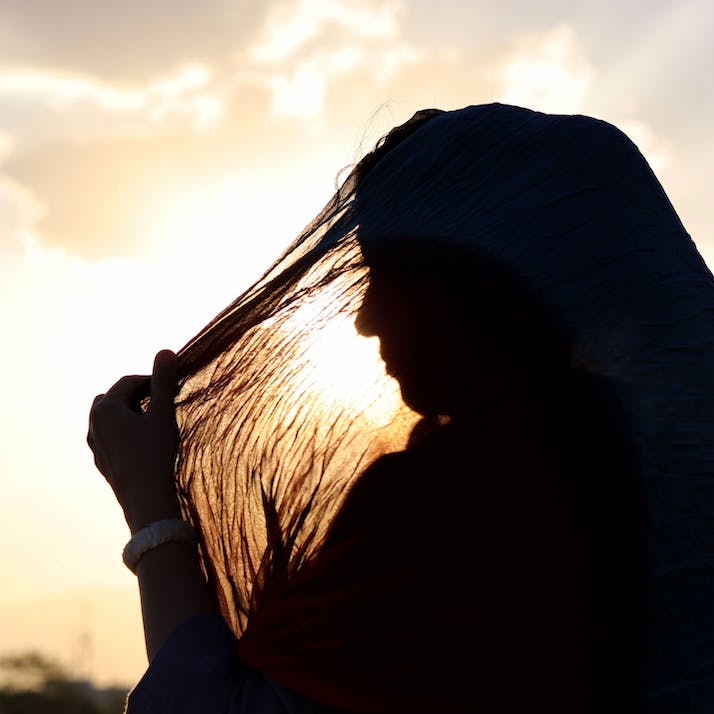 I Took Off the Hijab: Here’s Why

I hate that I can never truly be honest about how I feel after I made my choice.

Keeping a secret is very similar to working out. Exercise with a few different weights and your body will eventually adjust to the set weight your regimen is centered on. Your body, too, will be used to the secret it holds, and eventually, the weight of your secret will be negligible. It should be no surprise, then, that when you decide to lift a barbell with weights that you aren’t quite used to yet that your arms will start to shake, the gym lights above you glaring into your forehead, the weight of the bar too heavy for you to hold. That a secret, much like a barbell, will eventually collapse back onto you, crushing you with the weight you were unable to live under.

I have a secret.

Not anything of an intense kind or the life-threatening kind. In fact, it’s so negligible that people who don’t understand wouldn’t bat an eye.

People who do understand, however, will throw a fuss, as if I’ve shifted their worlds and the furniture on the ceiling is now my fault.

I took off my hijab nearly six months ago after a decade of wearing it. And I feel free—that’s my secret.

No one can know that. I’m not even allowed to say it out loud nor mention it—but I just did, and I’m angry that I have to do it anonymously.

People will ask me, “How does it feel?” And I have to smile and say, “The usual, it’s fine.” That’s a lie; it kind of feels great, even amazing. And yet, I feel guilty even saying that.

I’ve essentially pushed back the debate regarding hijabs by decades. Hijabs are a woman’s choice, and when it is their choice, it should be respected and acknowledged. My secret shouldn’t have this much value. In fact, my secret should be as mundane as my desire to have coffee at 7 a.m. It should be boring and uninteresting and entirely un-secret-like. But the world doesn’t want that. The world wishes for me to have this thought contained in my head like a lidless jar of water, holding on to every droplet escaping its brim. The world wishes that I be an anomaly because that would be easier than accepting that I live the truth of thousands of women, and there is no one that can know.

Muslim women living in countries without a Muslim majority are fighting for the right to keep their hijabs on. Were I alien looking from afar at the politics and legislation of every country, the rise in poverty, homelessness and inaccessible education would seem rather concerning. The choice made by states to focus legislation on banning a piece of cloth that does not have much to do with anyone besides those wearing it would be somewhat astonishing. Were I an alien, I would be dumbfounded. As a not-alien, I am.

It is due to this and the Islamophobic rhetoric existent throughout the West, which claims that Islam promotes women’s oppression and inequality, that I can never be honest. Were anyone to know how I felt, I would be validating toads such as Emmanuel Macron and Ben Shapiro. I would inadvertently be undoing the work of activists who have struggled for their right to wear what they wish and practice as they would.

I am, unfortunately, the stereotype that many Muslim women are unwillingly made to wear a hijab or pressured to do so due to fear of retaliation, familial and societal pressure and patriarchal authority. Yet many of the patriarchal norms that exist in different global communities stem not from the religion but from interpretations of the Quran that best serve anyone (often men) who wishes to enforce rules and regulations on the behavior, attire and future of women. It is haram, forbidden, to force a woman to wear a hijab, just as it is haram to force anything on anyone. When I was 10, it became clear to me that in order to live peacefully, in order for the other older women in my family to live peacefully without facing constant insult for not forcing me to wear one, that I should. It became clear that donning one was the only way to maintain peace. Many of my cousins, my friends, my neighbors wear it not because they want to but because they must, and that is a sad reality we can never speak of for fear of setting back the rights of hundreds of other Muslim women.

You might be wondering, why would the claims of one unknown woman do such a thing? Sometimes I wonder that, too, but the answer to that is only somewhat complex. It does not begin with 9/11, but that tragedy is a large part of it. It does not end with the movement to ban the hijab, but that, too, is a part of it.

I wasn’t born into the world with the desire to be an ambassador, but the world certainly changed that fairly quickly. It was the norm to be told to act appropriately, not because children should behave but because “the neighbors across the street might call the FBI on your father. You are a representation of every Muslim. Be nice. Don’t give them the wrong idea.” I didn’t understand who “them” was, but I quickly came to the realization that it was not me or anyone I was related to or anyone that sported a hijab. I, and every other Muslim in the United States, was different from my peers, and people would always believe so. In the wake of 9/11, the Muslim world (which does not only consist of the Middle East and North Africa) faced suspicion and distrust, with Muslims in countries without a Muslim majority facing the consequences of accusations of terrorism, suspicion, religiously motivated firings, social condemnation and social isolation. Suddenly, being a Muslim did not mean you were a person who practiced the religion of Islam; it meant that you were a representative of every other person who practiced Islam.

The desire to “save” Muslim women only increased as countries such as the United States justified the War in Iraq through claims of spreading “freedom for the women in Iraq”. Putting aside the 70,418 civilian deaths associated with the war, many of which may have been women, the “saviorship” ideal did not remain within the military. In fact, it trickled into popular culture fairly quickly. Movies depicting Hijabi women being abused, like Submission, and shows where girls take off their hijabs and suddenly are “free,” like Elite, flooded the media, and my 10-year-old self was given the task of combatting each and every one of those stereotypes the day after 9/11.

“”
I can finally find myself amid a life of peace.

I Feel More at Peace

The protection I was offered by a piece of cloth that held the weight of history was never understood by me until it was gone. Interactions I had with men were set to be friendly or professional. I had believed my hijab protected me from individuals thinking otherwise, but as I grew older, I realized nothing truly can protect you from the unwanted attention of men. I used to, however, when establishing my age wasn’t enough of a deterrent, say, “I’m Muslim,” and point to the hijab on my head. Men usually got the hint after saying that. Now whenever I speak to a man, it's as if everything I say carries a different weight. I say, “How are you?” and they hear, “I’m interested in you.”

Yet despite the cost associated with the removal of protection, nothing could compare to the feeling of rain running down my scalp, the breeze of wind pushing strands of my hair forward and backward, the invisibility associated with fitting into the norm—it was as if I had shed what I used to be and stepped into a wider world of possibility. Perhaps that in itself is sad, that the cloth that I had donned could have, in any way, been limiting, but our culture has always reminded me that it was. There was no longer any hesitation when participating in sports, any reluctance when walking into a room with no other hijabis or any relentless staring in every public space I occupied.

For many, being invisible is a horrid thing, but for me, I realized, it was freeing. It was like breathing pure air after wearing layers of masks, like the world had become brighter and more vivid while remaining entirely the same. I no longer represented millions of women or had to act in accordance with the established norms in place to represent culture rather than religion or live up to the expectations and visibility of being “that Hijabi” or “that girl with a hijab.” I had peace.

Salam, the Arabic word meaning peace, is a greeting that also acts as a farewell. It is fitting then that as I bid my life as a Hijabi adieu, I can finally find myself amid a life of peace.