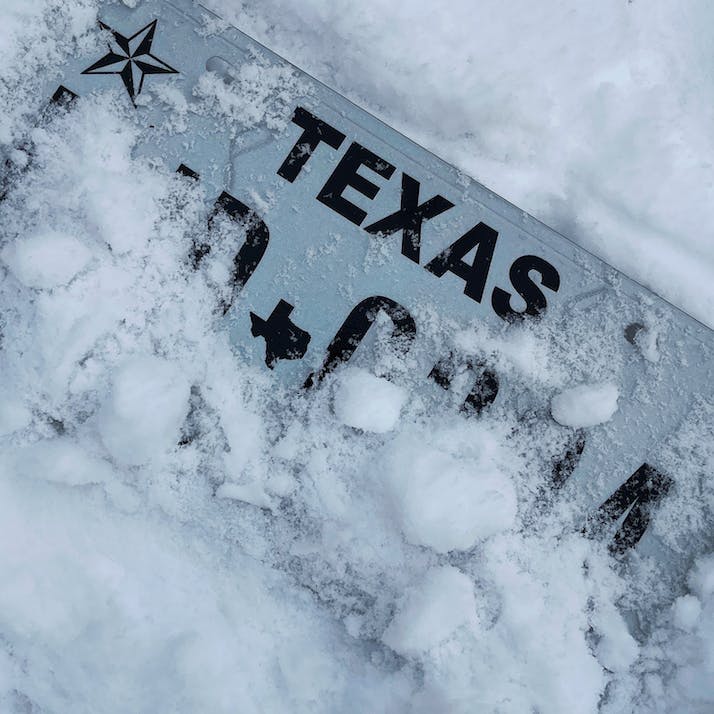 I Survived the Texas Winter Storm

This is what it’s like when your state officials don’t plan for disasters.

Fuck Me. Where do I start? Perhaps with the fact that there was definitely no fucking this week.

We’re trapped. Refugees in an arctic storm. No safe housing, no water. Nowhere to take a shit. Where am I? Siberia? Mongolia? Nope. Ladies and gentlemen, I’m in Austin, Texas.

Yeah, don’t fuck with Texas. (But not in the “scared of them” sense, more in the “you’ll get screwed there” sense). My German boyfriend and I came here for some work meetings. I’ll be elated if we make it out alive. And as a couple.

Let me preface this with saying that I’ve spent many-a-monsoon season in Bengal. I’ve hiked deep into the Danakil Depression in Ethiopia. I’ve waded through hip-high floods on my way to work in Shanghai. I’ve been fucked with (and fucked around with) people in places you haven’t even heard of.

But this is the most awful developing nation I’ve ever visited: Texas.

“”
This is the most awful developing nation I’ve ever visited: Texas.

The Weather Events Are Indicators of Great Change

As I scroll through the memes of “MISSING” and “WANTED: Last seen somewhere in Mexico” plastered around Texas Senator Ted Cruz’s oversized nose, I don’t even laugh. Seriously. Today, I saw ice growing on a blade of grass, 50 times thicker than the grass itself. These cacti will not thaw well. Thousands of sea turtles froze in shock.

OK, we don’t have to blame it all on Mr. “Cruz-outta-here” and the state’s lack of disaster preparedness. We can also just realize that these storms—these “unseasonable” events—are starting to become the norm. That natural disasters, earthquakes, hurricanes and misguided arctic blasts are all indicators of great change. And at this time—perhaps more than a time ever before in our species’ history—we are undergoing that great change. Growing pains, if you will. But to be stuck in the armpit of the Americas while it’s freeze-sprayed to get the wart off? Yeah, it sucks.

We have flight passes. We could leave at the snap of a finger. But, nope, the airport’s closed. The first few days, we thought it was silly—as if these Texans had never before seen snow. (My Floridian cousins didn’t until they were 14; the naivete is real.) But then, as we watched ice, half an inch thick, coating cars and roofs and chip off like thick-ass broken glass, we thought, “Oh shit, maybe this is kind of a big deal.” What is freezing rain, really? You’re either wet and warm, or you’re cold and dry. Right? I must have been sick the day of that weather class.

Some insiders are saying that Elon Musk has decided to pull out of building the Gigafactory in Austin. Who’s ready for the hashtag #TexasFail?

And it seems Elon’s not the only one putting a plug on the California-to-Texas brain-drain. Texas Republicans who made fun of California Democrats for wildfire power outages are tucking their tails between their legs. Oops? It’s a bit pathetic that climate change is this politicized, but karma’s a bitch.

“”
This is the darkest shit I’ve seen in a long, long time.

Everyone Fights for Themselves in a Mass Panic

This experience was a perfect diagnosis of the neurosis of humanity today. My boyfriend couldn’t believe the hyper-individualism he saw in Panicville, USA. Everyone fights for themselves.

Well, what about those people who can’t make it? What did old people do in their homes? Are they just screwed? An Uber driver told me he heard there were dozens dead across the state and more yet to be found. A six-year-old boy died in his bed.

In very German fashion, my boyfriend says it’s “particularly disgraceful” how this event was quickly taken up as a campaign against renewable energy. The Texas governor said midway into the blackout that the ERCOT power problem was because Texas had upped its solar and wind power. Bullshit. In this storm? Significantly more natural gas and coal went offline than renewables. There seemed to have been a secret agenda here. Wind energy is impactful beyond belief—and yes, like natural gas wells, pipelines, coal and nuclear power pipes, they all froze.

I froze, too. Thankfully, I was able to find shelter with friends —and then friends of friends. We were piled up to seven people in an apartment at one point. That place was still on the grid because of its proximity to a hospital.

At the end of last week, we found out that wind and solar produced a tremendous amount, and had a smaller hit than expected. So as we warmed our hands, logged onto the internet to let our families know we were okay, I cooked our last cans of beans. I accepted food from a pregnant woman to make sure we’d survive. Literally. This was Texas in 2021: Nothing was guaranteed.

“Can’t you just drive out?” asks my best friend, calling from tropical Hawaii.

“I wish, but they closed the roads.” It’s really hard to picture the apocalypse.

Imagine, driving on the highway, seeing 12 different car accidents in a one-mile stretch. Black ice shows no mercy. As a Tesla Uber Lux (the only one online) drove us back into our neighborhood to brave the cold night under our comforter, it was like a scene from Christopher Nolan’s Gotham City. Everywhere, all the lights were out. It was eerie and silent, and nobody was on the streets.

This Is Some Dark Shit—Literally

It’s been more than a week since we’ve gone to a grocery store. They’ve been either closed or food rationed. Sometimes they’ve turned people away. Just yesterday, we waited in line for an hour in below-freezing temperatures to get into Trader Joe’s, only to find out they had no more drinking water. Because of burst pipes and dripping faucets (to prevent pipe freeze), the increased water demand has resulted in reduced water pressure. This leads to the growth of harmful bacteria in the water. With power outages, treatment centers can’t properly treat water. Ew. We spent a day drinking only carbonated black tea. That didn’t feel good.

After shopping, we drove past a homeless man and gave him copious amounts of well-seasoned olives. Fat for frigid survival.

This is the darkest shit I’ve seen in a long, long time. I mean, hey, load-shedding is a thing. I’ve spent most of my adult life in India and Indonesia. I’m intimate with the concept. But “rolling” power outages when it’s solely the poor neighborhoods who go 100 hours without electricity? I think not.

Meanwhile, my wealthy friend’s wife is using their sauna and heating the pool to 84 in her home in West Lake. I mean, you can’t help but laugh. ERCOT, the power company, repeatedly tells lies. Media personnel are outed for wearing t-shirts in reporting videos (apparently they had the heat on high).

The mayor himself was caught in a press conference with art lighting on behind him. Sure, do as I say not as I do. My West Lake friend asks if I want to borrow a gun.