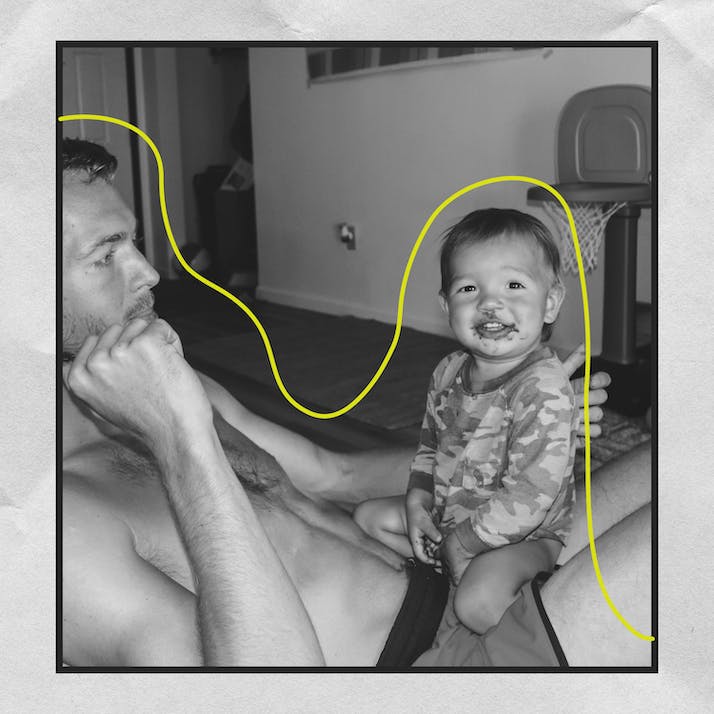 I Regret Having a Baby I Never Wanted

The life of a new father is falling apart because of his child.

It’s been ten months since my daughter arrived. Ten months. Yet I am still unable to accept my new life as a parent. There’s no dramatic accidental-unwanted-surprise pregnancy story here, I willingly chose to start trying with my partner, I made up my own mind and it was all planned. Yet still I am unable to accept this new life. It has been so monumentally difficult to accept that my mental health has suffered immensely. I have a history of anxiety and depression, so it might’ve been in the cards—but I never expected to end up in such a hole for so long, without being able to pull myself out of it.

Why can’t I accept it? I’ve reflected on this a lot. I’ve dug deep, there were times when all I could think about was: “Why?” Why has it been so impossible for me to ease into the groove and enjoy being a dad? Why does everything feel like a chore? Why am I grumpy, moody, passive-aggressive, withdrawn and all the variations of simmering, suppressed anger you can imagine?

If you think about something too hard you never get the answer, so it came to me when I least expected it. Like a tragic eureka moment, the lightbulb went off and the realization hit me: Deep down I never wanted this. It was an utterly shame-filled epiphany. I felt immediately disgusted with myself. I felt idiotic, immature, selfish. So many self-descriptive slurs came bubbling up and spilling out of my subconscious. How could I have done this? Is this just an extreme reaction to an intensely difficult and overwhelming life transition? I sat with it. Deep down I never wanted this. Was that my truth?

“”
Deep down I never wanted this.

Newborn Dad Depression Is Normal; This Is Not

By this point, I’d been going through repeated cycles of depression, anger, feelings of hopelessness, exhaustion, mental and physical fatigue and every month or so I’d have a meltdown. Our baby arrived in June. By Christmas, I’d referred myself to the therapy services run by my local council. I was way down deep in the blackest of holes and the only way out, it seemed, was to be able to talk to a professional.

I was only given six sessions. It’s not a lot but if you can allow yourself to open up you can make decent progress. In the first session I was afraid, but by the second appointment, the words came out of my mouth, “I wonder if I even really wanted to be a parent?” Before my therapist could reply, I quickly added, “But it’s too late now, I know.”

I still wondered if I was just my panicked mind trying to find a reason for my extreme reaction to this beautiful little newborn baby entering my life. But the truth was there. I knew it was true because every time I thought about it, it made total sense. It felt right. If I think about those words, “I never wanted this,” there’s an inner calm that emanates from my gut.

I Genuinely Feel Like My Baby Has Ruined My Life

There was a time when having a child felt like the dream. Four years into a long-term relationship, the decision was made. My partner had always been clear about her ambitions to have a family. I’d already been a father figure to my nephew. From the age of one, I’d been there for him, since his dad wasn’t around. I’d never had a dad either, so I wanted to make sure he didn’t go through what I did.

My liberty is one of the most important things in my life. While my partner dreamed of having a family, my dreams were less concrete and centered around peace, comfort, freedom, relaxation. I imagined a life where I could meditate every day, avoid overworking, come and go as I please, travel, enjoy life to the fullest. I was already doing that to a degree, but I was working toward a time where I could really settle into a wholesome, nourishing lifestyle that allowed me to be as solitary as need be. As an introvert, my lifeblood is alone time: time to reflect, process, generate ideas, read, write, draw, paint, meditate.

When did I change my mind? My partner started to go crazy. Driven by a deep biological need to start our family—but also by a deep psychological trauma relating to financial security—she became a workaholic. Desperate to reach a certain financial status before she could begin to think about her dream, she lost herself in work. In the end, she had a breakdown.

I knew what we had to do.

“”
There was a time when having a child felt like the dream.

Admitting I Shouldn’t Have Had a Baby Is Not Easy

Men are trained from a very young age to bury their feelings. We are experts at it. So that’s what I did. I buried my desire for a quiet life to make her dream a reality. By the time we found out we were pregnant, I was so convinced it was my dream too that I was overjoyed. The pregnancy was a happy nine months. When she arrived though, a few tiny hairline cracks appeared in my jubilant facade. We came home exhausted after an 18-hour labor, slept for 15 minutes and awoke to the door buzzing. The first arrival was downstairs. Within half an hour, we were trying to entertain three family members, barely able to think straight as they fired questions at us, posed with the baby and expected us to feed them.

A few weeks later, I was back at work, but I work from home. This space I’d occupied as my own was now taken up by all of us. This place now became a prison of sorts, where I couldn’t escape my parental responsibilities. The noise, the claustrophobia, the lack of sleep, the lack of space, time, energy. An introvert’s nightmare. My nightmare. My partner’s dream.

So I descended into depression and total disharmony. Every parent goes through it. I’m not a special case. It’s one of the most unsettling transitions anyone can go through. Most parents get through it because they learn to accept it, because it’s what they wanted. But my baseline is a deep aversion: Everything is a chore. Every difficult situation amplified by my need to escape. This is not the life I wanted. In my darkest moments, I’ve wished for death to come and whisk me away, a cowardly wish because I could never end it myself.

I have some coping mechanisms: exercise, going out for walks and so on. I have processed some of the early trauma, too. But I will never be able to escape this life. My dad left me when I was a few weeks old. I can’t let that happen to my daughter. I give her my all because she deserves it. She’d never know I don’t want to be doing this. It’s not her fault. So, my work now is acceptance. It’s all I can do: deal with it.

Being honest with yourself is the first step towards self-healing. I know what the problem is and I’m working toward coping. I hope these words resonate with others who feel similarly. When I searched online and there were very few articles on this subject. It’s taboo. Acknowledging that you’ve made a life-changing choice that you regret is not easy. People will think I’m ungrateful, despicable. How do you tell people? You don’t. You keep it to yourself.

Hopefully others that share my experience will read this and find some solace. You’re not alone.