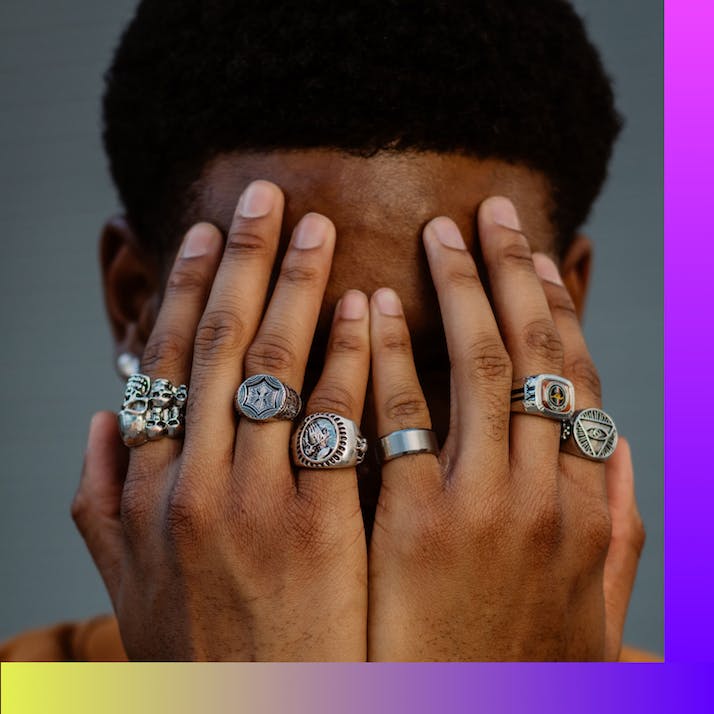 I Love Wearing Rings: They Tell the Story of My Life

I’ve lost some of my closest friends to violence, but one ring, in particular, reminds me of what I’ve overcome.

A good ring is something everyone should have on their hands. A ring that represents you, that tells something about you, that defines you. People instinctively pay attention to your hands, so wearing the right rings for the right occasion is important. Rings can introduce you to everyone you meet and introduce you to others without ever having to speak.

Rings can also reveal the brightest and the darkest parts of our past. Those with a metal circle around their finger will sometimes communicate more than they want to. The rings will not give details but will leave hints and clues about what the person wearing them is trying to explain or hide. That is why it’s so important to choose the right ring—it will present you to the world.

“”
One does not simply wear a ring of a skull with demon horns to a wedding in a Catholic church.

Three of My Rings Always Stay on My Fingers

I really love rings. Every time I find one that I like and fits my style, I buy it and put it into rotation with my others. The rings I use depend a lot on the occasion—the outfit I’ll be wearing, the place and mood of the situation and the people who are going to be surrounding me. One does not simply wear a ring of a skull with demon horns to a wedding in a Catholic church.

Of course, it’s important not to sacrifice all your style just to fit into the group. If you are like me and use more than three rings (I use eight; four on each hand), I recommend you take only the ones that best represent you when going to fancy and elegant settings. At these kinds of events, like weddings or funerals, I wear only three of my eight habitual rings: the left ring finger and both middle fingers. Some represent the past, some represent the future and all have meaning for me.

One ring symbolizes couple love, which, in my case, references the fact that I’ve always had trouble finding the right one. I’ve tried so much and put effort into it, but I realized I would never find her. Another—the one I wear on my left middle finger—has the shape of a Nordic wolf’s head, with small and fine carvings that make the animal look calm and humble and not hostile as often presented. A third, on the right middle finger, symbolizes family bonds and, in my case, those who gifted it to me.

My Best Friend Saved My Life, and I Became Part of the Pack

The story behind the wolf ring is a bit dark, and I hope nobody can identify with it by having suffered the same. Years ago, I was part of a group of people, similar to a small gang. We never did illegal stuff. Instead of being the typical junkies, we were teens who helped others without asking for anything in return. People in our hood called us "Wolves" because we always moved in groups and we helped each other out like a real pack.

Yes, we did smoke cigarettes and drink sodas while chatting in our free time, but there was almost always something we could do to help—big or small. We helped the local market stores get rid of criminals and helped out people (mostly our same age) if they were being picked on or harassed by bullies. We helped people in the market unload their merchandise off trucks. Sometimes we even helped with night patrol of the neighborhood. We tried to make the world a better place with small acts.

One day, I tried to commit suicide. I was immersed in a massive depression and emotionally and physically worn out. I was going through a lot at the time. I didn’t tell anybody about it, but somehow, my best friend, Romo, who was also a Wolf, found out and arrived in time at my house to stop me. He ripped the knife out of my hand and beat me up until I couldn’t stand up.

I still remember what he said when I was on the ground, laying against the wall, looking at him. The tears in his eyes held a mix of anger, sadness and desperation. His words were like a slap to the face mixed with a bucket of freezing cold water: “Don’t be stupid! There are people out there that depend on you, that need you. If you die, who is going to look after them? They need you to guide them, to help them, so you better be the one they need you to be, or I’ll be here again to prevent you from killing yourself, brother. Never forget they need you. I need you. I love you, brother. I love you so much, and I will always be by your side, want it or not, so you better get used to it.”

After that, he apologized for hurting me, and we both went to my favorite restaurant for dinner. Two weeks after that event, I received the terrible news. Romo had killed himself. He hung himself from a handrail. I was devastated. I felt broken. Without me telling him, he found out about me and saved me, but I wasn’t able to do the same for him. I crumbled into pieces.

The Wolves were worried for me, so one day they showed up at my house and gave me a small but beautiful gift: a ring in the shape of a Nordic wolf’s head. They told me that if I ever needed them, they would be there by my side, and that that ring would be proof of it.

My Wolf Ring Reminded Me I Had a Life Worth Living

Time passed by, and after almost a month, another tragedy occurred. Three armed robbers tried to rob a store at night. Obviously, my friends, who were on night patrol, went to help and stop the robbery, but those criminals fired their guns and ran away. The next morning, I found out what had happened: The three robbers shot my friends, the ones who I had the honor and luck of calling my brothers, as well as the store clerk. They took the money and fled the scene.

I was destroyed. There is no existing word to describe the pain I felt and the suffering I went through in that moment. Those who I considered my family, my brothers, were now dead. I felt completely bleak and alone, broken and with no hope. Two days after my friends died, impacted by the depression, the sadness and the emptiness in my heart, I decided to try to take my life again.

But then I looked at my left hand and saw the silver wolf on my finger. I remembered Romo and what he had said to me the night he stopped me from killing myself. I moved the knife away from my throat, dropped it and then dropped myself onto the floor, bursting in tears because I had no one left in this world. That ring helped save my life.

“”
That ring helped save my life.

My Rings Remind Me of Everything I’ve Been Through

Another ring I wear has the shape of a jackal. In ancient Egypt, jackals were loyal to their own and took care of their group. I bought this ring a couple months ago as it made me remember my past. It gave me the opportunity to give everything I have lived a new meaning and look at it from a new perspective. It gave me the opportunity to take my open wounds, close them and turn them into scars that will mark my story in me.

When I look at them, they will show me everything I have been through, good or bad, that has forged me and made me the person I am today.

Those are the meanings and stories behind my main rings. In my daily life, I use more than just those three, but that trio never falls out of rotation. They always stay in their place, on their own finger. A ring can mean lots of things. It can have a simple story or a very complex and deep meaning. You can also find your own, one that becomes part of you.