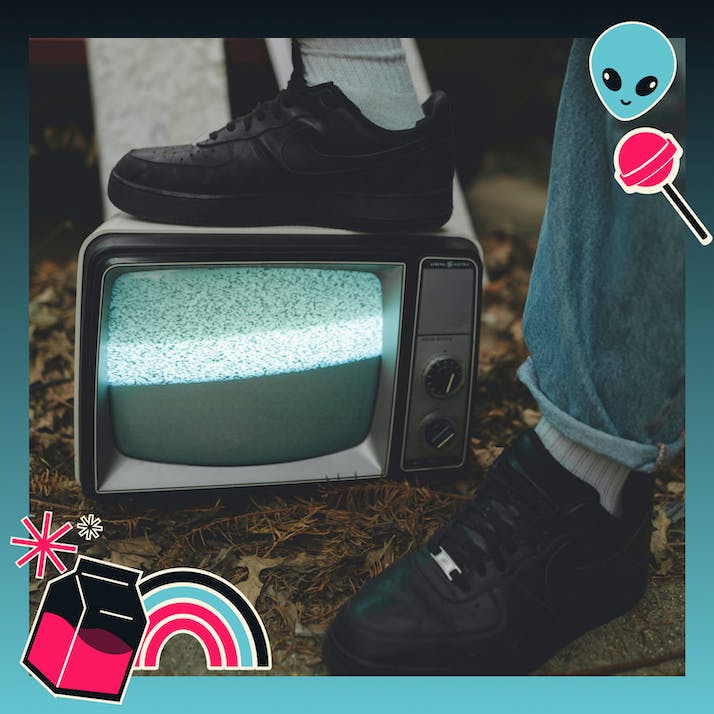 Repeats of Rocky and incomplete VHS tapes gave me a strong foundation for handling adversity.

Channel 5, as a youth in the U.K., was also great. It meant television from overseas. It even felt distant, the way the satellite video crackled and hissed, filling the screen with the pale fog. Years later, I remember coming down and seeing that Channel 5 had fixed its reception. Shows came in crystal clear. This magical, foreign channel looked just like any others. It felt like part of my childhood had died.

Channel 5 brought shows like Xena: Warrior Princess. I remember telling Dad that I liked the show, but I didn’t like how she used her legs to grab men by the head. It wasn't realistic. Not even Conan would use his thighs to snap someone's neck.

“But that’s the whole plot?” Dad said. He loved Xena.

“”
That was part of old television—you had to do the best with what you had.

Boring Television Filled the Background of My Childhood

Some television wasn't good. Stuff like The Golden Girls, a show about old ladies talking and little else. The poor satellite signal made it difficult to hear what the women were saying, not that it mattered much. There weren’t any swords or monsters, so I wasn’t interested.

Still, boring television was a big part of my childhood. The droning of garden programs and the endless repeats of shows like Airwolf. I remember the first time I heard the name Airwolf. In my mind, it was going to be werewolves flying about in jet planes. Unfortunately for me, this wasn't the plot of Airwolf. I was very disappointed.

But that was part of old television—you had to do the best with what you had. I remember sitting with my mom watching Rocky for the fifth time that week. There was nothing else on, so we started this Mystery Science Theater 3000 voice-over. Each of us would take turns dubbing the character's voice. The aim of the game was to make the character say something silly and make the other person laugh.

Then there were VHS cassettes. These were little black rectangles filled with tape. One of my favorites was Goosebumps, “A Night In Terror Tower.” It was about these American kids who visit an English dungeon and get transported to the Middle Ages. The episode was 40 minutes long and split between two tapes. I only had the first half and didn't get to see the end for 15 years. It would stop right where the kids were told they'd be burned for witchcraft.

I watched the tape religiously. I loved everything Goosebumps. I even had the bedspread, something which I still own to this day. And though it was annoying never getting to see the end of the episode, in my frustration, I'd stare out of the window and come up with my own endings.

My Dad Ruined Cereal for Me

I also loved all things horror, so you can imagine my joy when Sugar Puffs cereal released their new ghostly pencil toppers. They were called Glo Ghosts and looked like Casper’s evil friends painted in bright colors. I remember pestering my mom to get a box and opening one the next day. Dad came in and sat next to me.

“You know where Sugar Puffs come from, right?” he asked. He’d already stopped me from eating Nesquik by telling me it was rabbit poop. “Why else would they put a rabbit on the box?” he’d suggested.

“What does bee poop look like?” I asked, assuming he was making the same joke with this cereal’s mascot.

“Oh, nothing like that,” he replied, watching me let out a sigh. "But,” talking in that tone of his, "Don't you think they look like bees?"

I looked at the spoon. “No, they don't,” I said. “Bees don't sit still; they fly about everywhere. Everyone knows that.”

I remember then wondering if a bowlful of bee stings could pop your belly from the inside.

I like to tell that story at family gatherings. Dad doesn't mind. He enjoys it—you can tell by the way he sits in the corner, wearing that same smile from my childhood. You didn’t have many options when I was a kid, but you always had a choice. Want to get mad that you only had half of a video? Sure, it makes sense. Cry that your favorite pencil toppers meant eating a box of dead bees? Well, it is terrible. You can complain and moan when someone turns Channel Five into one endless rerun of M*A*S*H. Or get embarrassed when you realize your dad is some kind of fairytale trickster.

“”
Can you own the moment when things aren't going the way they should?

My Limited Options Allowed Me to Own the Moment

Or, if you like, you can do something with it. Me? I still watched Channel Five, even though I couldn’t always hear what was said. I still sat down with Mom and watched Rocky, even if I had nothing funny to say. I never ate Sugar Puffs again or got another Glo Ghost, but I did learn something from my dad. Something about the power of words. I didn’t have everything I wanted growing up, but I did have a choice. When things got rough, I'd ask myself, “Can you own the moment?”

Childhood can be boring, and I doubt that's changed. At least in my day, I could blame it on the limited options, which is a shame for all you new people. Still, the question remains: Can you own the moment when things aren't going the way they should? No doubt, we'll always have some excuse, something to blame, someone to point the finger at. But the truth is, there's nothing quite like taking these moments and turning them into something we can enjoy. It's not easy, not at the start, but it's better than sitting there with no option but to suffer.

How to do it? Now, that's the easy bit. You just sit down and get it done. Don't worry if you're too embarrassed. Just pretend you're someone else. Put on a silly voice, like me when watching Rocky with my mom. You might not be able to change the world to make all the problems go away. You're only human, after all. But you can pay attention. And, in the end, if nothing else, remember this: You can do a lot worse than bring laughter to a tired old show.