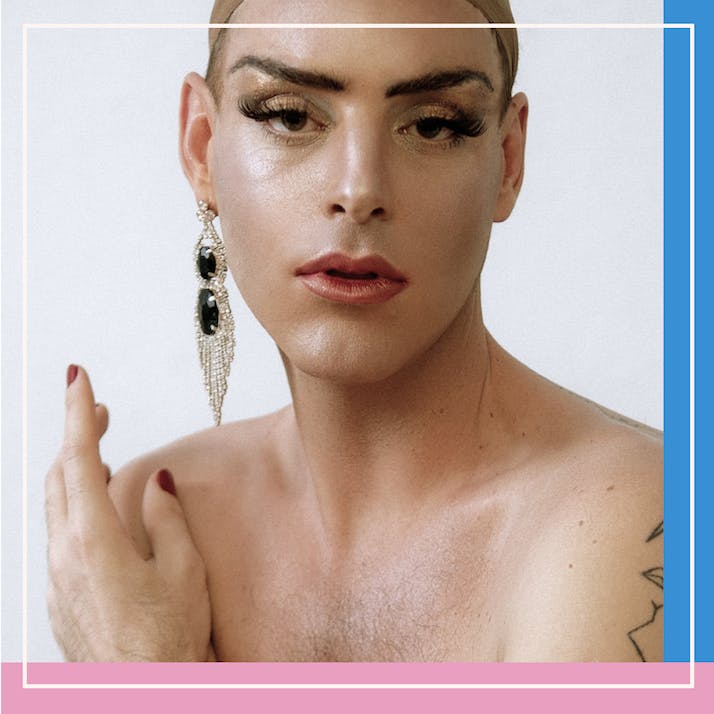 I Am My Mother's Daughter—and Her Son

Thanks to my mother’s unconditional love and support, I felt comfortable coming out as trans to her.

In “To Zion,” the fourth track from Lauryn Hill's 1998 debut album The Miseducation of Lauryn Hill, the acclaimed artist sings to her infant son, Zion David. A love song about her devotion to her baby, it shares her overwhelming gratitude for being chosen by God to be his mother and her determination at the height of her career to foster the life that was growing inside of her, even while everyone around her advised her not to.

My earliest memory is of my mom singing "To Zion" to me as a toddler. It’s what she had chosen as her song to me, her youngest child and only son. When my mom got pregnant with me and then gave birth, she had very little in common with Lauryn Hill. I wasn’t her first child, and she also wasn’t at the height of her career or in her early 20s. No one had even told her to terminate her pregnancy. But my mom had suffered a heavy trauma a year before giving birth to me, when she miscarried a son late into her pregnancy. I imagine that the lyrics, “See life for you, my prince, has just begun / And I thank you for choosing me / To come through unto life to be,” were something of a mantra and that the song served as a kind of testimony for her.

By the time I was 4 years old, she raised my two sisters and me as a single mom. My parents had separated, and while my dad largely remained the financial provider of our family, my mom was our emotional and physical caretaker and primary parent. She wanted more for us; she wanted us to be different from the rest of our family and from most of the people she had grown up with in her tight-knit working-class Italian American community, where family was first and everything else came second. My mom also believed in treating my sisters and me like autonomous human beings, which to this day is still a radical concept for many people raising children.

But from a young age, it was clear to my family that I was queer. We didn’t have the right language, so the word that was often used about me was “gay.” The two eldest grandchildren in my family—both boys—had come out as gay within a year of each other before I was 5 years old. While my family wasn’t as accepting of my cousins as they are today, when I began showing signs of being different, they saw, accepted and loved me. The thing is, I never saw myself as gay as a child. I knew that I liked boys but, importantly, I also knew that I was a girl.

How do you verbalize that to your family as a young child with no concept of what being trans is?

“”
How do you verbalize that to your family as a young child with no concept of what being trans is?

My Mother’s Advice Has Stayed With Me Forever

Like all queer and trans kids, I grew up in a world of mixed signals and confusion and, from an early age, I learned to live in my own secretive and guarded world as a defense mechanism. Most of the experiences at my Catholic elementary school were brutal—I struggled to express myself and came home crying every day, always about the same thing. I had been called a slur or been made fun of for being flamboyant and feminine. Often, I would cry into my mom's lap about not being treated like one of the girls, confused by the fact that no one saw me as the girl I saw in myself.

I was unable to communicate that to anyone, even my mom. But during one of these crying spells, she told me something that has stayed with me throughout my life. I had two options: I could either change and try to act like the rest of the boys, or I could continue to be who I was and deal with the fact that some people would make fun of me. She showed me that I had a choice to make, and she didn’t shy away from the fact that both choices would be equally difficult, full of sacrifices on both ends. Through my tears, I told her that I would choose the second option, that I would continue to be myself and learn to deal with the torment that I was encountering outside of my home.

Most Italian American homes have strict gender roles that are imposed upon children from a young age, but I was raised with a different set of values and customs. Italian American daughters are raised to carry the emotional burden of their families, whereas Italian American sons are raised to be little princes who rule their mothers’ hearts and, in return, act as their mothers’ protector for the rest of their life. My mom grew up the youngest of five children with three older brothers, and throughout her childhood, she had grown to hate what she perceived as their misogynistic masculinity and laziness.

She vowed as a mother that regardless of her children's genders, she would raise them equally rather than imparting a different set of rules to her daughters and her sons. But as the common phrase goes, “We make plans, and God laughs,” and my mom faltered in her fortitude, trying her hardest to be true to that promise she had made to herself many years ago. For the most part, my sisters and I were raised with the same values and rules.

My mom imparted the same wisdom to all three of us, encouraging us to be true to ourselves, to have integrity and to protect one another and those we loved. But I still was my mom's little prince, babied as both the youngest and her only son. In return for being treated like royalty, I held up my end of the centuries-old contract and protected my mom throughout my childhood and teen years. Whenever there was a fight or any bit of criticism wielded toward my mom, I found myself going to battle for her. Where my sisters fought with my mom tooth and nail, I only saw the good in her and canonized her a saint in my heart. And when I fought with my dad tooth and nail, my sisters canonized him a saint in their hearts.

“”
After my mother tried twice to have the son she wanted so badly, was I robbing her of her divine right to have this experience?

My Mother’s Love Overwhelmed Me When I Came Out

When I was 20 years old and living in Brazil, I decided that I could no longer run away from my womanhood and started coming to grips with the fact that I had to transition. I felt ready to do it, but I hesitated over a very specific question: After my mother tried twice to have the son she wanted so badly, was I robbing her of her divine right to have this experience?

A week later, one of my sisters called and told me that if I ever decided to transition, our mom had told her that she would be ready because of the way the culture had shifted. I remember yelling at my sister, telling her to tell my mom that I wasn’t trans and that I was offended by that line of thinking. When I finally calmed down, I found myself overwhelmed by my mom's love, acceptance and ability to see me once again so clearly.

Two weeks later, on Christmas Eve of 2015, I FaceTimed my mom from my apartment in Brazil and came out to her as her daughter. She accepted me, with a sense of calm and grace that she has always carried with her in the most intense moments, and simply told me that she loved me. Soon after, she was posting on Facebook about her three daughters.

Our Family Has an Unbreakable Bond of Sisterhood

It’s now been six years since I came out as trans, and my relationship with my mom has evolved into something that isn’t exactly quantifiable or definable. I know that I am her daughter and that she sees me as such, but I also know that in many ways, I am still her son, something we both acknowledge and laugh about often. To this day, I don’t look to my mom as someone who I have built my womanhood from; instead, I look to other trans women with whom I have a similar shared experience of womanhood.

Of course, I am still in many ways my mom's protector, the way that all Italian American sons are. But as her daughter, I see her vulnerability and humanity in ways I didn’t understand until I became a woman. We will never be able to fully relate to one another's experience as women because we have come to our womanhood differently, but we share an unbreakable bond of sisterhood as mother and daughter, and we share an unbreakable bond of love and understanding as mother and son.

The older I get and the more my relationship with my mom evolves and grows deeper, I relate heavily to the lyrics in “To Zion”: “And I thank you for choosing me.” I thank God and the universe for choosing me to be my mom's child and to have the only unconditional love I’ve ever known in my entire life.