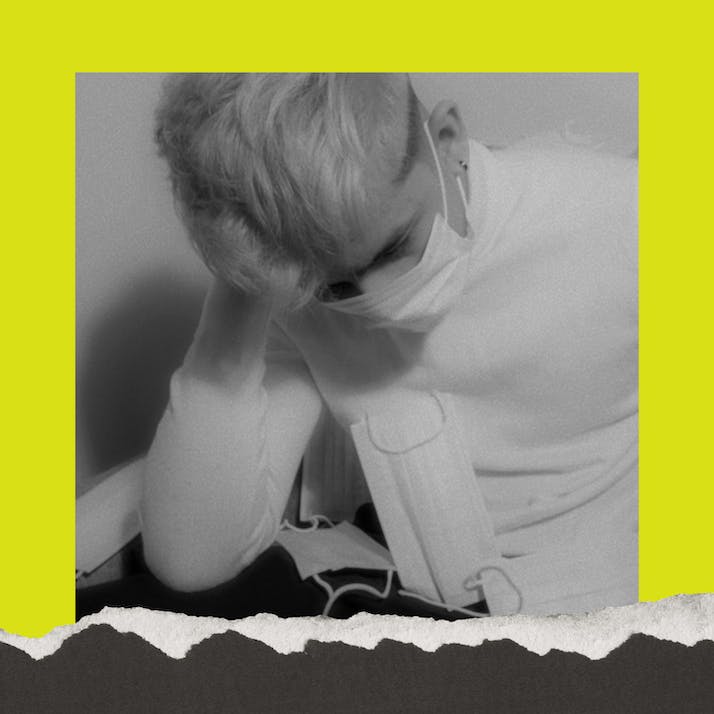 I’m a Hypochondriac Living Through a Global Pandemic

I was already living with a debilitating fear of illness and death. Then COVID hit.

I used to joke about my mother’s obsession with health. We were the house that handed out raisins on Halloween; for special occasions, she would bake brownies supplemented with a can of black beans for nutritional content. In an instant, I can still conjure the memory of my friend’s pinched impression of her faint Long Island accent: “Don’t use nail polish in the house, or you’re gonna get cancer!”

Cancer might be what kills me. But as I’ve discovered, it could also be a number of other things. If I make it past my 60s, I’ll undoubtedly succumb to Alzheimer’s like both of my mother’s parents, no matter how much I try to avoid cooking with aluminum foil. Or perhaps I’ll yield to a fatal cocktail of various ailments. My grandfather survived a quadruple bypass but diabetes landed him in the hospital, where his bedsores led to sepsis. And then of course there’s our family’s newest killer: COVID-19.

Before the pandemic, I had been putting off plans to visit my only living grandmother. I’d spent the better part of my adolescence trekking back and forth between Philadelphia and New York to observe my maternal grandparents deteriorating at a glacial pace. The stale, putrefying scent of sterilized decay has been permanently imprinted in my nasal cavity. I was desperate for an excuse to skip the trip and, finally, I had one—a mysterious and vaguely dangerous disease, not quite the flu, but close in nature. My parents and I agreed that once the two-week quarantine period had passed, I would book an Amtrak to Penn Station.

Except it never did.

She lived a long and robust life, raising three sons as a working woman while my grandfather drove trucks around the country. She was a powerful, cold and complicated woman. I loved her. I respected her. Yet, sprawled across a stark, white hospital bed, my grandmother had been reduced to a casualty of what would soon become one of the deadliest plagues in history.

I’ve witnessed death from afar. Heard the nightmarish recounting of a person’s final moments; seen the muted veil of sorrow that looms like a cloud in the wake of their passing. As I observed my grandmother in her final moments, the vastness of my suffering was eclipsed by a visceral fear.

I had imagined dying in a hospital countless times—it comes with the territory of hypochondria. But for the past year, it’s been all I can think about: If I, too, will slowly wither away in the company of strangers, an oxygen mask bruising welts into my skin.

“”
And then of course there’s our family’s newest killer: COVID-19.

Telling My Therapist Was a Necessary Step

Death anxiety, or thanatophobia, is the oldest form of fear, with existential death anxiety among its most powerful ranks. Denial of death is necessary in order to function. Philosopher Baruch Spinoza writes, “A free man thinks of nothing less than death; and his wisdom is a meditation not on death but on life.” On the other hand, Martin Heidegger argues that we encounter the notion of death when considering the future. One must accept angst in order to welcome death as a mode of being. This perspective frames death as something meaningful, if not empirical—the process of Sein-zum-Tode, or “being-toward-death,” recognizes that death is finite, thus we can only live authentically by confronting our mortality and ascertaining the purpose in its finiteness.

I would love to embrace my inevitable demise as much as I would love to disregard it entirely. But I can’t escape my body, and the lingering fear of when—not if—it will fail me. Of course, this type of thinking isn’t new to the pandemic era, but it certainly has been amplified. The threat of death looms in the mundane: a trip to the supermarket, a brief conversation with a stranger, a package in the mail. What were once distractions from death have become harbingers of my impermanence.

It took me five months of sessions to mention my hypochondriasis to my last therapist. I did so in passing, attempting to diminish its noteworthiness by tacking it onto the end of my laundry list of woes and agonies.

Weeks earlier, I’d noticed strange, dark tendrils suspended in my vision, curls of smoke that seemed to vanish as soon as I returned indoors. By that point, I’d brokered a deal with myself—I would never look up my symptoms online, lest it would lead me down the rabbit hole into a state of maximum crisis. But I couldn’t eat, and I wasn’t sleeping. In fact, I had only finally contacted an ophthalmologist after falling asleep at work in front of my manager.

Later, I would learn that my eyes were just sensitive to light and I had developed floaters, which are irritating and ultimately harmless. But that afternoon, sprawled across the beige couch in my therapist’s office, where so many asses had sat before me, I was sure, as I explained to her, that my symptoms meant I must be dying.

At first, she didn’t appear to acknowledge what I had said. Then, the proverbial lightbulb flickered above her head.

“Oh,” she said, her eyes bright and wide. “This makes so much sense.”

“”
He was alive, and then suddenly he wasn’t.

Anything Can Be a Trigger

I was diagnosed with obsessive-compulsive disorder in college, but it didn’t consume me until my junior year. My mother called with some unfortunate news: An estranged family friend had died. Time had long since washed away any memories I may have shared with him, but I asked, as one does, what had happened.

“Well, you know, he was a smoker,” she said, and I nodded along absently, scrubbing at the purple nail polish that clung to my skin around my fingernails. Lung cancer, I figured.

“No, no,” she said. “He just woke up with chills one afternoon and his wife took him to the hospital. He died a month later from septic shock.”

By the time I hung up, my cuticles were plucked raw. Thirty days. He was alive, and then suddenly he wasn’t.

My entire body began to tremble, as though God had cranked an invisible dial delivering an electric current straight through my veins. My teeth chattered so hard that I bit down my tongue. I winced as the brackish tang of blood saturated my mouth. I curled into the fetal position, drawing in breath after shallow breath, my lungs shrieking for air, nails carved into the palm of my fist, whimpering like a wounded animal.

For the first time in my life, I understood that I was going to die. It could happen slowly or instantly. Excruciatingly or painlessly. One day, my body would turn against me, just as it had then—and there wasn’t a single thing that I could do to stop it.

Over the years, I’ve only experienced a handful of episodes of that magnitude. Each one has been catalyzed by something benign, both literally and figuratively. Someone from high school was diagnosed with brain cancer and, suddenly, my headaches seemed to last for hours. I watched Muriel’s Wedding after sustaining a back injury and convinced myself that I had not only developed spinal cancer but would soon be paralyzed from the waist down. I had a one-night stand with an acquaintance and worked myself into a frenzy for five days before receiving a full STI panel. I heard a clicking noise in my throat, which an ENT determined was not thyroid cancer, but globus pharyngis, or the sensation of a lump in the throat caused by acute anxiety.

COVID quickly became the defining factor in every decision I’ve made since. I’m immunocompromised, leading me to be deemed “the cautious one” among my friends. I dined outside this past weekend for the first time since the start of the pandemic. I still limit my excursions and, until recently, have requested testing in the rare event that I’ll be in close quarters with someone who does not live in my household.

My parents and I received our second vaccine shots at the end of March. In two weeks, I plan to hug them for the first time since January of 2020. I can confidently state that being fully vaccinated has alleviated a significant portion of my day-to-day anxiety. My vaccine card sits on my desk in plain sight, where it serves as sufficient evidence to talk myself down from the edge of most COVID-related panic. The yellowing bruise on my right arm has yet to fade completely. I can only see it when I squint.

For my birthday this month, I’ll be celebrating with a small group of friends in the yard. I even scheduled a tattoo appointment as a gift to myself—a Russell Woodard sculptura chair that once sat on my grandmother’s front porch. Of course, my wariness hasn’t disappeared altogether; cases are escalating, and variants have rendered the vaccines less effective. For many of us, it is difficult to envision life post-COVID, especially given the rigid dichotomy between people whose lives have been irrevocably altered by the virus versus those who have continued to operate as though COVID never existed in the first place. Either way, my brain will certainly waste no time offering plenty of reasons as to why I should live in a state of perpetual trepidation.

My hypochondria is inextricably linked with my obsessive-compulsive disorder, and the past year has made me more cognizant of it than ever before. Our “return to the new normal” will mark a bizarre transitory period in which I must navigate spaces that have become unfamiliar to me. I imagine this going one of two ways. Potentially, in an attempt to fill the void that COVID left behind, other dangers could feel amplified, causing me to retreat further into the endless mine of anxiety. However, if I were an optimist—a mindset to which I find myself clinging more frequently these days—I would say that the alternative outcome may find me working to earn back the precious time and experiences that were stolen from me. As the weather warms, it’s fair to say that the world is beginning to seem a little brighter.

There are few things I know for certain. Here are the two that matter most: I am going to die someday. Right now, however, I’m very much still alive.