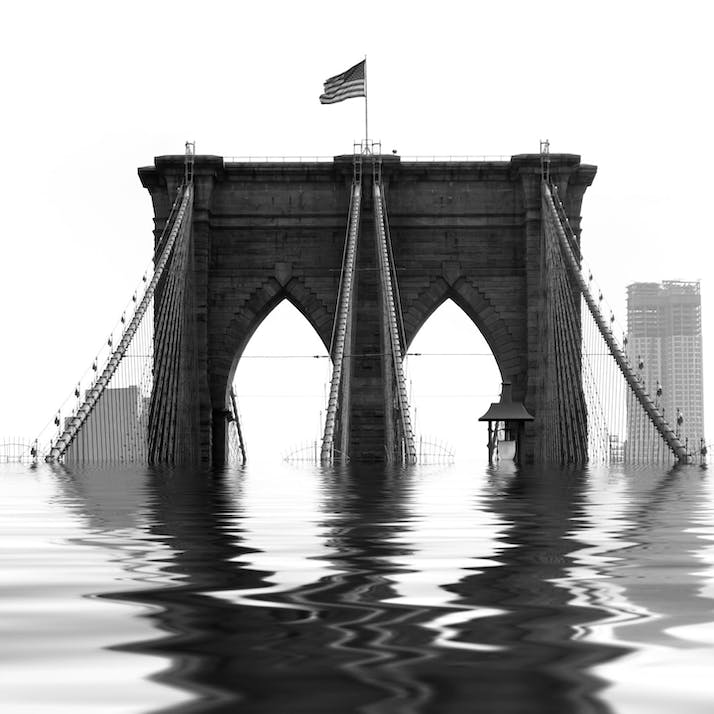 Hurricane Ida: The Night I Barely Survived a Flash Flood

The hurricane attacked New York City in early September and flooded my apartment. I was lucky to get out alive.

It was approximately 9:30 p.m. on September 1, 2021. I had just finished having dinner with my partner, Alex, and we sat in our bedroom playing chess online. It was raining quite heavily and had been doing so for about two or three hours. I had been going out to the front of our New York City building every 45 minutes or so to get some fresh air, fascinated by how hard it was raining.

Eventually, my basement neighbor knocked on my door. I thought this was strange, as I rarely received a knock. He warned me that a bit of water was beginning to come in underneath the building's front door and into the hallway. He was very calm, and the water by the door didn’t seem like much at this point, almost as if someone had spilled a bucket of water. I realized my neighbor’s concern; he's in a basement and some of his property could be damaged, so I offered to help him move some of his belongings to higher ground. As I left my bedroom and headed into my apartment hallway, two or three centimeters of water had trickled inside.

"OK, we'll put some towels down at the front door and that should help out,” Alex and I thought. Soon, a significant amount of water had accumulated in the building’s hallway and began rushing into my unit. The water was now at my ankles—much worse than I thought. But at this point, I didn’t think the water would go any higher. I called my mom just to check up on her and let her know the situation.

By then, our third-floor neighbor had invited us to store some belongings in her apartment and to possibly spend the night. We gratefully accepted. Alex had grabbed a few things, and I brought my laptop. On our way upstairs, one of the neighbors suggested we go back down to move our stuff to higher ground. Alex insisted this was something we should do. Again, I didn't think the water would get any higher than my ankles, so I thought it was unnecessary, but I agreed, mostly because I didn't want Alex to be down there alone. We spent a couple of minutes on the third floor before returning to the first floor, where the water had risen to my knees.

“”
I was locked in, and the water was just below my waist.

Water Cascaded Through the Window, and We Began Saving Valuables

At this point, I began to understand this was a potentially life-threatening situation—I began to understand the stakes. The water was rising so quickly that I knew any previous estimation I made was going to be useless. We swiftly ran into the apartment with the idea of grabbing our documents (passports, wallets, IDs, etc.) and any other valuable belongings we wished to save. Alex managed to secure them while I grabbed an empty backpack. Suddenly, the water began pouring through the windows, forming a cascade. "My car is outside and probably submerged in water,” I thought. It was all quite difficult to process—especially with a waterfall in my living room.

Nothing made any sense except knowing that the only thing worth saving in the apartment was our lives. I ran into the bedroom where Alex was packing a bag with clothes. I grabbed her by the wrist and forcefully pulled her toward me and headed out to the front door, which was now closed shut. I attempted to turn and pull the doorknob to no effect. The pressure applied on the door was too great. I was locked in, and the water was just below my waist.

This being a first-floor apartment, all the windows had metal rails to deter any would-be thief. There was no way in or out besides the steel-reinforced front door, which was now shut and too heavy for any human to open. I had only one thought: "I have to get through this door, but I have to destroy it to get through.” Alex tried calling 911 but calls weren’t answered. I began to have that sensation of water creeping up higher and higher on my body, not unlike slowly walking into a shallow pool or wading into the ocean.

To bust down the door, I would need my toolbox underneath the kitchen sink. The problem was that the cabinet underneath was hidden under murky water, and visibility was practically zero. But as any desperate man in such a desperate situation would do, I reached down into the cabinet, and by the grace of God, or whatever manifestation of a higher power or supreme being that you may believe in, the toolbox—that small, orange, $10 toolbox from IKEA—was the first item that grazed my hand. I pulled out the hammer and knew I needed to get through the locking mechanism on the door. That meant open season on the door handle.

“”
Your personal items and belongings can be replaced or recovered over time. Your life cannot.

Take My Advice in a Flood: Get to Higher Ground

After a few good smashes, I wrecked the knob, but the door still wouldn’t open. My next thought was to strike the doorframe right by the lock and attempt to bend the doorframe, releasing the tension on the lock and causing it to swing open. I made some progress but still couldn’t get all the way through. At this point, the water was at my belly button.

My neighbor then rushed downstairs with a hammer of their own and began striking the frame from the opposite side of the door. One, two, three good, coordinated strikes and the door swung open with massive force. Needless to say, Alex and I ran all the way up to the third-floor apartment to spend the night, safe from the flooded floors below.

My hands were completely beat up. In striking the door, every hammer miss meant that my hand made contact with the door, taking chunks out of my flesh. Importantly, I survived, and I’m grateful for that. I wasn’t able to save anything of significance from my apartment, but I’m alive, which is more than enough to be thankful for. In hindsight, adrenaline saved me and my lack of exit strategy. Many others were not as fortunate.

If my firsthand experience with a flash flood is worth anything, remember the following: In a flash flood, the paramount thing to do is get to higher ground. Your personal items and belongings can be replaced or recovered over time. Your life cannot.