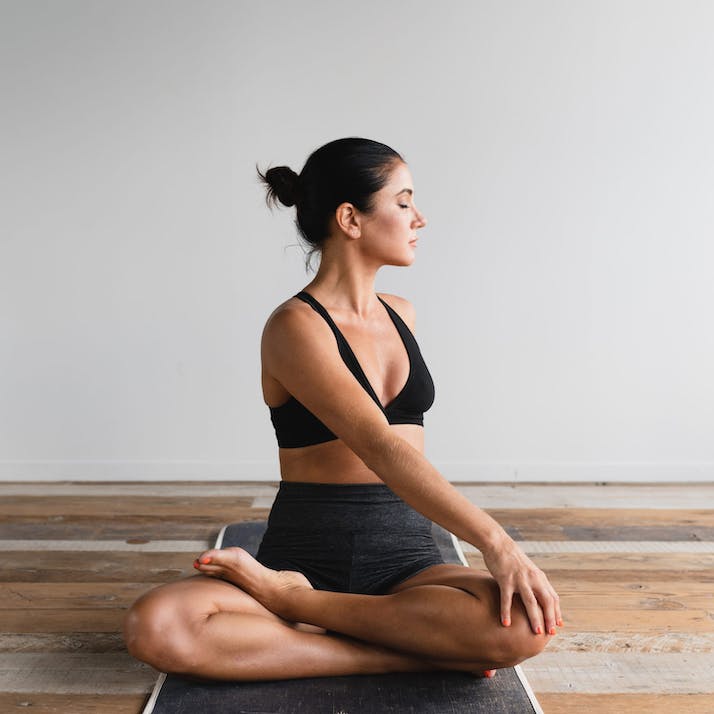 How Yoga Helped Me Overcome Fear and Discover My Passion

After suffering from rejection and stress in the corporate world, a creative writer turns to a physical and spiritual practice to guide her own self-care.

Laying in a frog pose on my yoga mat, I began to cry.  With my legs splayed open—bent at the knees, my belly and hot cheek to the floor, my arms looking like a goal post—not so silent tears began trickling down my face. “I’m going to turn the music up so do not worry what noises you need to make to find surrender in this posture,” my yoga teacher, Ariella, had just said. “No one will hear you.” So, as Lauryn Hill’s “When It Hurts So Bad” blasted into my ears, I began to breathe deeply, and in my mind and heart the phrase “I am not a failure” began repeating itself.

Yoga Helped Me Reevaluate What I Really Wanted

On that January day, I acknowledged an anniversary. I’d hit a year of unemployment—a year of rejections, a year of “We went with a more experienced candidate,” a year of interviews and judgment. But being in that vulnerable position, my hips stretching and opening more than I thought possible, a wave of forgiveness washed over me.

“I am not a failure” sent chills over my entire body, and I cried.

I’d cried silently at my computer reading so many rejection letters that year. I thought I’d been releasing my anguish and disappointment, but really, I’d been accumulating self-loathing and doubt and storing it in my hips and heart. “I am a failure” had, unbeknownst to my consciousness, turned into a personal mantra. I let the rejection of others define my worth and character. My energy was stuck, balling up tighter and tighter in my body, triggering me to live as a failure and to give up on myself. But, that day in frog pose, I’d inverted those ideas and began to liberate myself from them. This time, the tears weren’t self-pitying, they were empowering. I would no longer tie the value of my personhood to someone else’s capitalistic assessment of me. How exponentially freeing.

“”
Being in that vulnerable position, my hips stretching and opening more than I thought possible, a wave of forgiveness washed over me.

It Also Gave Me the Courage to Pursue It

Leaving my yoga mat, I continued to embody “I am not a failure.” Redefining how I thought about my life, my impact on this world and regularly breathing in my new mantra allowed for greater openness. All the hiring managers who had spurned my advances perhaps saw something in me that I hadn’t been ready to acknowledge. I’m not meant to be boxed into a corporate or nonprofit role. Those places’ pride in burnout, unpaid overtime and torturous commutes always sank my heart into a dark, unhappy place. To bring the lightness back into our conversations, I’d end most of the interviews by asking, “What do you do for self-care?” The common response from the wedding planners, program coordinators, college administrators: “Drink.” I knew a more profound and balanced happiness was possible. I’d felt it sweep over me. I just had to follow my path, not theirs.

When I first started practicing yoga—or even when I first settled into frog pose that winter—I never expected a yoga asana to so profoundly change my life. But yoga allowed me to find solid footing after endlessly slipping, and Ariella’s teachings allowed me to forgive myself for the times I’d fallen. When I surrendered to the pose, I was able to tune in to what my body was trying to tell me: slow down. A purpose-driven life is not something I am meant to chase down. My soul’s intention is waiting for me—it is internal and needs strength to be unlocked.

“”
I just had to follow my path, not theirs.

I Can Honestly Say Yoga Changed My Life

The winter came and went. The novel coronavirus stifled a few opportunities. But now, I follow my passions. I write and lead other women in creative writing groups that center on empowerment, healing and finding one's authentic voice. I’m actively creating community during a time of deep isolation. My work contributes to a kinder and more supportive world. It not only supports others, but it is food for my soul. I am energized from it, not drained. My commute now starts from my upstairs bedroom and ends at my desk downstairs. I do not martyr myself for someone else’s profits. Lastly, this job grants me time to practice yoga every day and continue to learn and share in this ancient healing ritual. This is a gift.

It’s impossible to know which minuscule moments will change our lives, but I think there are dozens or hundreds or thousands of them throughout our lifetime. Some we notice, many we miss. We all expect the dream job offer, or the marriage proposal, or the move across the country to be the most dramatic and impactful of life’s junctions, but what if they’re not? What if they’re the moments we take for granted? The small acts of self-care. The ability to be still in our bodies. What can we gain from these quiet kindnesses? You deserve to find out.