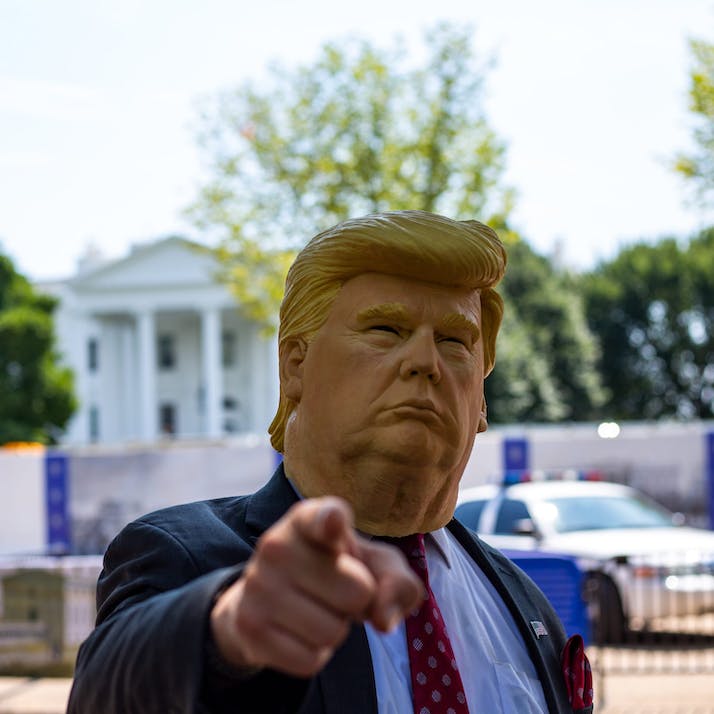 How I Deal With My Racist, White Family

Change is possible, the author writes, as her mother begins to encounter white privilege.

I'm a white girl who grew up with zealous evangelical parents. I had the principles of justice, fairness, empathy and truth drilled into me my entire upbringing. My parents were Republican, so I was too. I thought my dad was the smartest person I'd ever met. I didn't know yet about right-wing talking points, or the toxicity of Rush Limbaugh that we'd be forced to soak up on road trips, or the poison pumping out of Fox News that my dad would turn on every day before and after dinner. I was too caught up with friends, boys and the comfort of my whiteness to question any of these staples in the background of my existence.

When I went to college, my world broke open. I learned the real history of my country for the first time. I was educated about the many disenfranchised groups in our country that were holding this country together. I encountered my whiteness, my privilege. I couldn't wait to tell Mom and Dad about all of these injustices, because of course they would be as horrified as I was.

Cut to my naive ass calling Mom or Dad after a class, eager to share with them these new lessons I was learning. These calls ended in tears, yelling, hang-ups. I felt betrayed. My parents had raised me to care about justice and compassion, but I was learning that in their worldview, those principals didn't apply to everyone. Justice and righteousness…but black people were responsible for everything that happened to them now because slavery was over. Kindness and compassion…but people of color were their own worst enemies and needed to pull themselves up by the bootstraps—never mind that they’d never been given boots in the first place.

The tension hasn’t gone away and has been the most difficult aspect of my relationship with my parents. How do you reconcile being in a close, loving, authentic relationship with people who also hold racist beliefs? How was I to reconcile who they were as individuals—good and kind and fair—with their Fox News-shaped ideology about the menacing Other lurking "out there”?

“”
My parents had raised me to care about justice and compassion, but I was learning that in their worldview, those principals didn't apply to everyone.

We Tried to Compartmentalize

In 2016 we called a moratorium on essentially all current events, because we couldn't have productive dialogue and my respect for my dad was deteriorating at an alarming rate. By compartmentalizing, we were able to salvage some of the love and fun and laughter from our relationship. Although it's always felt like an elephant in the room, it's also felt like the only option.

Ten years after my first awakening—which is to say a month ago—I was in online therapy and having to once again, for the millionth time, address that I’m still not able to accept my parents’ beliefs that I find offensive. I still felt betrayed. My therapist told me the only answer was to search for acceptance, to take them off their parental pedestal and accept them and their beliefs as they are, for my own sake.

My Mom Has Started to Listen

Two weeks later, my mom and I got on the phone. I was nervous. She knew I’d been protesting the day before. I knew the state of the country was all too raw and important for me to talk about anything else. I tiptoed and braced myself. And then she shared that the past week had transformed her, and forced her to ask how she hadn’t seen the problems of racial oppression before.

"All black people have been asking is to be heard," she said as she choked up. “To be believed."

I couldn't believe my ears. She told me how she’d always been in denial of white privilege because of the disadvantages she’d been born into: an absent alcoholic father, a mentally ill mother, poverty, hunger, abuse. She’d finally realized that none of those aspects of her experience were invalid, but that she also didn’t have to go through them on top of the daily challenges of having black skin in America.

Ultimately, it was hearing from black women in the church who she could be sure "didn't have an agenda"—because of course Fox News has always told her a black person speaking of their victimization is just a charade for the liberal agenda—that moved her to understanding.

Now that my mom has seen American racism for what it is, she can’t unsee it. But she’s still in a delicate place. Fox News is still saying, "What about black on black crime?" and my dad refuses to utter the words "systemic racism,” because doing so would pull the entire rug out from under his worldview. She’s being whiplashed.

I saw them over the weekend and it was clear that my mom—who’s always followed my dad’s lead—is now on her own journey, one that he isn’t walking it with her. We argued. My dad stormed off when he couldn't find any more talking points to throw around.

But my mom insisted that the rest of us stay up and talk until 2 a.m. She cried while she retreaded the idea that she's always tried to be a good person and wasn't given much. We held her hand as we walked her once again through the concept of privilege. And she heard us.

“”
Now that my mom has seen American racism for what it is, she can’t unsee it.

Let's be clear: We will always be too far ahead for her. We're talking about defunding the police right now while she's only just started to confront her white privilege for the first time in her life. But watching her come around has healed my heart. I’d given up hope in the name of acceptance, and then the universe changed my mom's heart in ways I hadn’t thought were possible. I don't know how she'll sustain these new discoveries without my dad as her teammate, and with the poison coming out of her TV every day.

But I now believe more than ever that it is white people who are responsible for this work of changing from the inside out. It might take another decade of hang-up phone fights and moratoriums until we finish it, but we can’t give up. There’s always hope, even if we can’t always see it.

On the RecordDoe Print Value - Stability