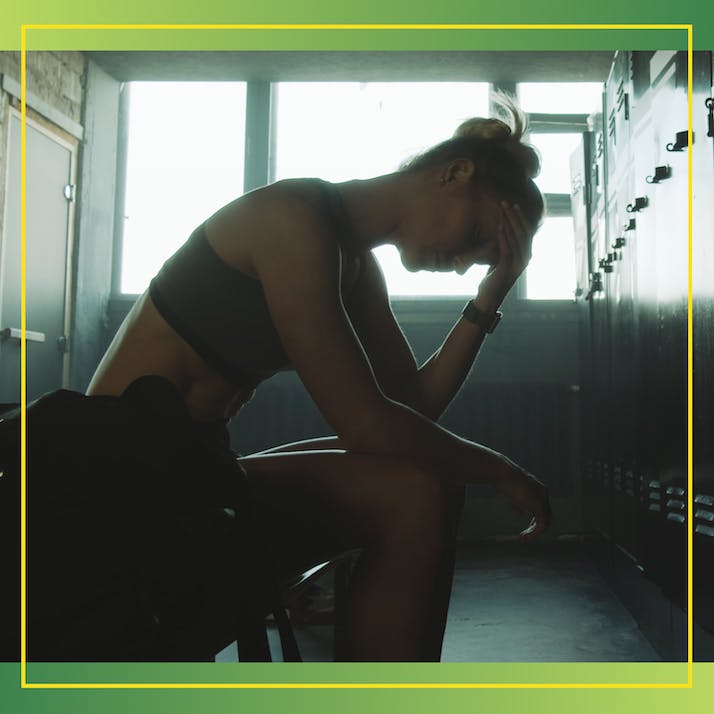 Throughout my time playing softball, soccer and cheerleading, I struggled with how teammates and friends perceived my height and weight.

According to a 2017 survey, over half of high schoolers participate in a sport. So odds are that you, the reader, did so or even continue to play a sport now. Those of you who didn’t play sports growing up probably know an athlete or love an athlete in your life. While sports are often a fun way to get people active, the pressure of playing competitive sports causes a lot of proven mental health issues in athletes.

I was put into athletics when I was about three years old. My parents signed me up for gymnastics and a soccer program called Lil Kickers. Since then, I have never stopped playing sports. My dad was my coach for most of my life, sometimes more of a coach than a dad. He pushed me hard from a young age to be “the best athlete I can be.” I put on blinders and focused on sports because that was the expectation set for me.

“”
In my mind, I wasn’t fast enough, good enough or pretty enough to be on the soccer team.

Early Success Set Me up for a Downward Spiral

The first time anybody made a comment on my body, I was in fifth grade. A thin, beautiful girl with an always-perfect ponytail told me that I was a good goalie because I was the only one on our team wide enough to stop the ball. I didn’t really understand why she said this, or what it meant, but I wish I would’ve known that it would spiral from there. I developed an extremely high level of anxiety when I was in about fourth grade, the year I started playing competitive travel soccer. Ever since then, I have struggled with panic attacks, social isolation of my own doing and extreme perfectionism. I continued playing competitive soccer and recreational softball through eighth grade, but my problems only multiplied when I got into high school.

When I started, I had the usual doubts about whether people there would think I’m cool, especially because I was going to a new school where I knew a total of three people. The transition to high school is stressful for anyone, but with the persistent thoughts I have, the experience broke me down until I had nothing left. I didn’t make the soccer team my freshman year, and that sent me into what would be a three-year spiral. In my mind, I wasn’t fast enough, good enough or pretty enough to be on the soccer team.

Instead, I wound up beginning my journey on the varsity softball team. I loved it. They were a family I had never really had before on the field. The girls were funny, true to themselves and exactly the type of people I wanted to be around. My coaches pushed me—hard. It was exhausting but totally worth it, and I absolutely fell in love with the sport.

Athletics Gave Me Confidence, and They Also Broke Me Down

I also made the decision during sophomore year to join the cheerleading team, despite having no experience, skills or even a real desire to be on it. Immediately, I was introduced to a world I had never seen before. Instead of support, I received snide comments and mental hardships from my coaches, who said I wasn’t pretty because I wasn’t skinny enough. I developed an eating disorder.

With this came depression, a monster that would never let me forget that I wasn’t good enough. Between the anxiety, the depression, and the binging and purging, I completely changed. I was no longer the happy, fun girl that I had been for most of my life. I became a bad decision-maker who had no friends.

This is really difficult to write about, and I’ve never admitted it before, but I ended up making an attempt on my own life, mainly due to the fact that I hated my body. I loathed waking up every day and being the tall, bulky girl at school and the loud, man-sized girl at practice. I thought I would never be happy with myself.

I am lucky to be here today, and I recognize this.

Eventually, after getting out of high school sports, I realized I had some things to do. I mended my relationship with my father, and we are now closer than ever. I began to acknowledge the perfectionistic thoughts that have dug themselves into my life for as long as I can remember. I started going to more intensive therapy and breaking down the walls I had built to block out the trauma. I was doing amazing for myself, and I know my parents were extremely proud of me.

“”
The journey to recovery is not an easy one.

I Relapsed, but I’m Still Recovering

When I got to college, a new world opened up. While I am one of the very few women in my major, I absolutely love what I’m studying. I joined the lacrosse team and found a family away from my hometown. I was loving my life and was excited to begin the next chapter. Unfortunately though, with progress comes regression. I began to loathe my body even more than before. I hated that I wasn’t the stereotypical girl who gets all the boys, and instead felt like the big strong athlete who was one of the boys. So, after about six months of completely normal eating, I began the arduous journey back into anorexia.

Starving yourself is not pleasant, and I refuse to sugarcoat or romanticize it. Waking up every day and counting how many of your ribs you can see is miserable. Passing out from hunger is scary and horrible. There is nothing fun at all about having an eating disorder. But hearing, “Wow, you’re looking so good,” and, “You could be a model, seriously,” made it worth it for me. The tears from my body literally shutting down— the body dysphoria—was all justified when someone who didn’t know me all that well thought I looked good.

The journey to recovery is not an easy one.

I am finally getting treatment for the eating disorder that has followed me throughout my life. I am addressing my issues and am trying my best to accept the body that I was given. My body is strong, tall, resilient and allows me to go on all the adventures I missed out on because depression wouldn’t let me. It is exhausting, trying to reach an unreachable standard of perfection, and I have decided it’s not worth putting my life on the line to become someone that society deems good enough. I am good enough. You are good enough.