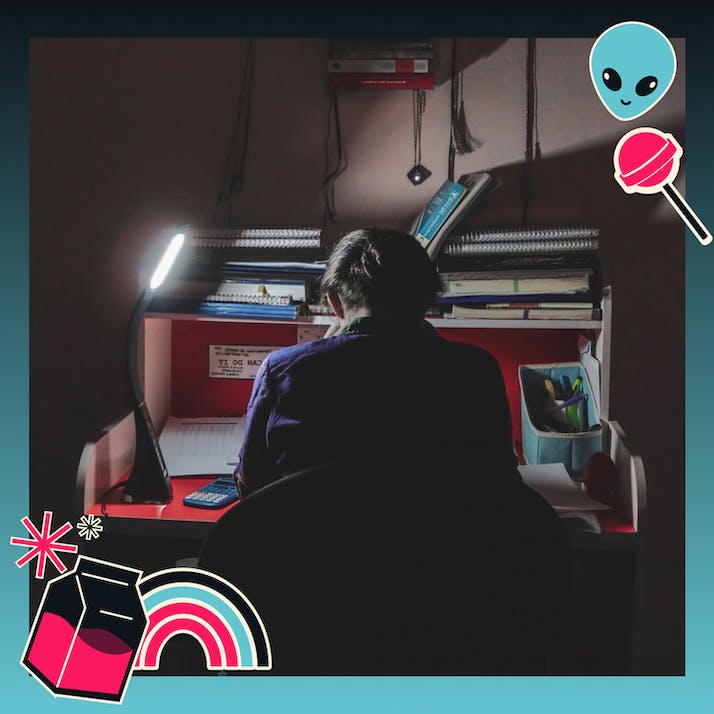 I went down a burnt-out, drunken rabbit hole until I began reading some of my old writing.

I entered it exhausted and thrilled, needing to stop and ready to go. It was my top choice; it was Harvard. It would be fantastic. I’d done what I was supposed to. Two weeks in, I had a messy breakup, one I should have seen coming and should have initiated. I was least prepared for how it affected my academics. I expected it to have no effect. The highs and lows of my grades were a cycle somehow independent of my disastrous mental health, but they always averaged high enough to keep my educators impressed.

But I was worn down by burnout, living alone with a liquor store or bar on every corner. I got wasted nightly and blasted music through my headphones like I was a kid drowning out the school bus with emo-pop again. I rewatched the same sexy teen TV shows over and over, tracking the plot through a wine-soaked fog only because I’d seen them so often. I lay under the shower for the white noise, made physical against my skin, and tried not to think.

It was a kind of awfulness I hadn’t experienced for years. Everything between then and the breakup surged to the surface in lists of my faults, memories of awkward moments and misspoken words, flooding me every second of the day. I couldn’t think about the breakup, or I’d stop being able to delude myself into believing it was temporary. Then I might really be miserable.

“”
Not allowing yourself to think is bad for an academic career.

I Found the Glee Fan Fiction I Wrote as a Teenager

Not allowing yourself to think is bad for an academic career. I dropped the first class in my life. I showed up in other classes with alcohol still sloshing in my head. I lost track of my thoughts every few seconds and saw in the faces of my professors and classmates every expression on a range between pity and disdain. I pretended not to know where my headaches and stomachaches were coming from and successfully deluded myself into ignoring the red hands printed in purple stains around my apartment. I wrung every bit of serotonin I could out of YouTube and video games, Netflix and old favorite albums.

Down that drunken hole, alone in my apartment and having run through all the old favorite TV shows and movies and music I could bombard my senses with, I resorted to scrolling through my external hard drive. After a series of half-written first chapters of derivative novels, I found an embarrassing amount of my Glee fan fiction.

Maybe because it was high school, maybe because I was desperate to be good at singing in spite of my lack of talent: This was the only fan fiction I’d written with a self-inserted character. I hadn’t thought much about that character for a long time, but I read through all the eloquence of a 15-year-old fangirl, mostly copy-pasting song lyrics, and I found myself attached to the character from the outside. I look back at high school and never stop cringing. But for some reason, this character drew me in.

So I went and I found the original three chapters of something I’d written that had given my character an original story and read those before I passed out. When I woke up, I got through the routine of barfing and taking some meds, then I found a different half-finished version of the story I’d written, one I’d whipped up during a midterm season I wanted to ignore. I read it during my classes, trying not to vomit on the floor of the classroom. I slept off a migraine for two days.

My Grades Got Worse as I Began Writing Again

I spent November of my second year writing a complete story based on the skeleton I had.

It sucked from the get-go. It was malformed and built out of a corpse of something I would have no longer liked living. So I started again, and as it came together, so did I. I remembered what it felt like to want to do something. To want to do anything. I let myself become the obsessive writer, with all the alcohol and suicidal ideation.

Now, I’m supposed to tell you it made me a better student. Or that it helped with my alcoholism. The latter is marginally true—paying attention to the writing kept me from thinking much about what made me want to drink and kept me distracted from the idea itself. And, it turns out, in the space between 14 and 25, I had become a better writer.

The brightness of the spark in the story threw my burnout into higher relief, and I became a worse student. The manuscript was a nightmare, unruly and refusing to work, made of pointed edges. When they cut me, I bled a sludge of fermented teen angst. It was grueling and demanded all my time. I never transformed into a better student; I became a worse one. Hands caked in the muck of bad prose, terrible characterization and a boring plot, I began to realize the breakup didn’t help, but it didn’t matter. The fight I’d been losing was between who I should be and who I was. Between what I wanted and what the world wanted of me.

“”
The fight I’d been losing was between who I should be and who I was.

Rewriting My Character Helped Me See a Better Future

I’ll spare you the rant on the destructive nature of the academy as it is and leave you with this: I had to become a shitty student to become someone whose life I liked.

There’s this idea that when you do well in school, you owe it to the world to keep going up—in academics, in industry, wherever. You can do anything, everything. Or so you keep being told. If you don’t, if you aren’t always at the top, you aren’t living up to your potential. It’s wasteful.

Encouragement from teachers and parents so easily becomes disgust. But why does having an option mean you have to take it?

Well, turns out I couldn’t take it. Trying broke me apart. But stripping a story and a character down and watching them come together stronger, into everything I always knew they could be, made it a little easier to believe I wouldn’t stay in pieces.